What to Expect in 2020 for Russia–US Relations

Russia and the United States have had another year of rocky relations that have included more sanctions, heavy rhetoric, and a shortage of constructive dialogue to bring the two countries together. 2020 will likely be a mixed bag of steps forward and stagnation that closely resembles the past couple of years.

Nevertheless, here are three of the boldest predictions for Russia-US relations in 2020:

Prediction #2: Expect Russia to be absent from the 2020 election

Prediction #3: Expect Russia and the United States to extend the New START Treaty

Russia and the United States have had another year of rocky relations that have included more sanctions, heavy rhetoric, and a shortage of constructive dialogue to bring the two countries together. 2020 will likely be a mixed bag of steps forward and stagnation that closely resembles the past couple of years.

Nevertheless, here are three of the boldest predictions for Russia-US relations in 2020:

Russophobia has become par for the course since circa 2016. Its emergence as a tool wielded for political expediency is nothing new. In fact, the current moment we live in is truly reminiscent of the Red Scare — an era of McCarthyism that vociferously painted Russia and Communism at large as inherently evil and unpalatable. One could argue that the current moment is perhaps more tamed than that time when Senator Joseph McCarthy made a speech on Lincoln Day, February 9, 1950, to the Republican Women's Club of Wheeling, West Virginia, and proceeded to brand 205 Americans as Soviet apparatchiks. Still, the moment we live in now is not so far removed.

Today, instead of being baselessly branded as apparatchiks, political opponents (typically of the Democratic Party establishment) are seared with the pejorative of being a "Russian asset." Often times there is no basis for such a label, and even more often those labelled are hardly what one would call pro-Russian. Take, for example, Senate Majority Leader Mitch McConnell, who has been smeared with the nickname "Moscow Mitch" for not taking seriously a rather useless bill aimed at virtue signalling a false seriousness about "election security." Or, take Democratic Presidential Candidate Tulsi Gabbard, who has come under fire from members of her own party and been chastised as a "Russian asset" for merely opposing the policy of perpetual war and regime change.

In each case, the label doesn't fit, nor is it remotely accurate, but what it is designed to do is to win the argument without making an argument. Demonizing an opponent as a "Russian asset" is simply easier than formulating a well-reasoned, cogent argument that addresses the facts. It requires less time, effort, and due diligence — and that's why Russia will continue to be weaponized in the American political arena.

That said, there is at least one other reason to expect more Russophobia in 2020. That reason starts and ends with the American media. 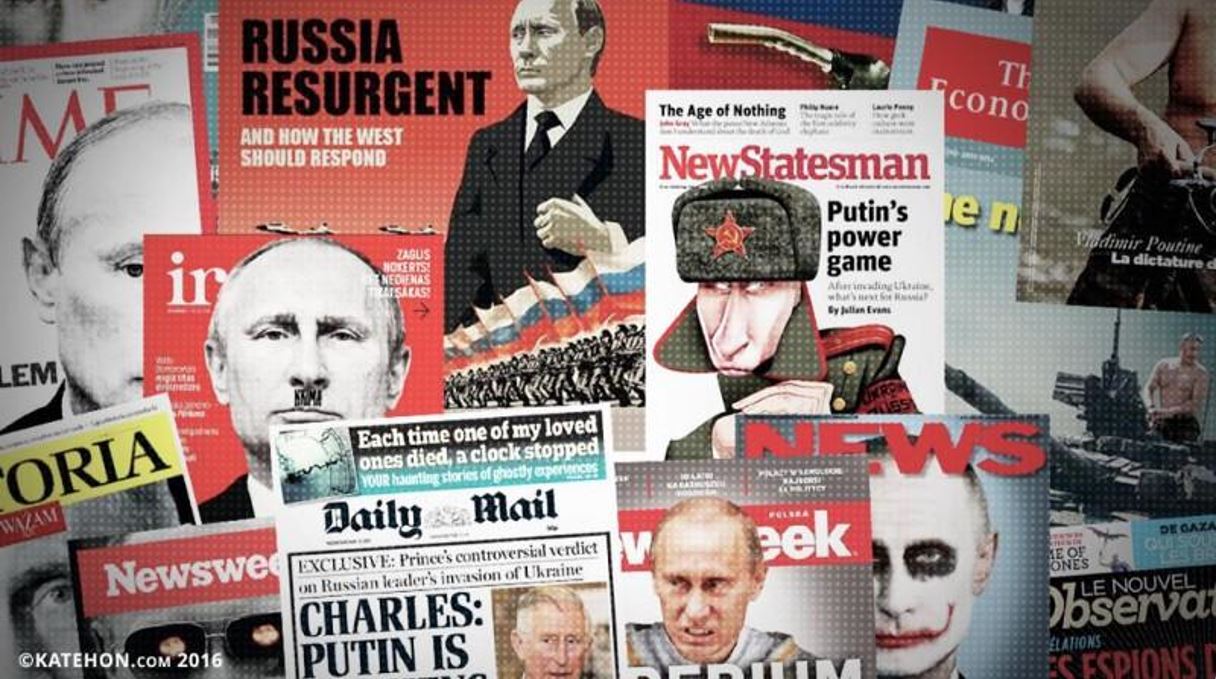 A sample of the Russophobia circulated in Western media.

Americans over the past couple of years have developed an irrational fear of Russia, which has been incited by a media culture that has traded away honest journalism for meretricious sensationalism and selective outrage that is devoid of objectivity. American media culture, unfortunately, has little incentive to change business models moving into 2020, and the reason being is relatively clear. Since 2016, cable news outlets, for example, have experienced an increase in profit of more than 19%, while at the same time devoting between 19 and 32% of all their media coverage to sensationalized stories that instil fear towards Russia and under normal circumstances would amount to slander.

Unfortunately, McCarthyism didn’t dissipate after just one election cycle. It lingered around like a bad cold for decades to come. It took on new forms and iterations over time. The current form of Russophobia will be no different. It will take on new shapes and sizes in 2020, but it will nonetheless be a feature of the Russia-US relationship that will carry with us into the upcoming year.

Prediction #2: Expect Russia to be absent from the 2020 election

For months, pundits and politicians in the United States have warned and stated without evidence that "Russia will be back in 2020" to "interfere" and "undermine American democracy." The problem is — there is not much reason to believe these forecasts of doom and discord will come to fruition. Russia will likely be absent from the 2020 presidential election in the same way it was missing from the 2017 German elections, the 2018 US midterms, and the most recent UK general election. In each instance aforementioned, there was wild speculation that Russia would interfere to tip the ballot box in its favour in the same way it allegedly did so in 2016. And yet in each instance, Russian meddling was nowhere to be found.

Western media outlets raised false alarms for months and eventually took on the role of the boy who cried wolf. This history will likely repeat itself in 2020 because as mentioned earlier, the corporate media has a profit-driven incentive to sensationalize everything to do with Russia.

In fact, President Putin and his administration have virtually no incentive to interfere in 2020 given the hysteria and the backlash it has received for more than three years. As fun as sanctions are, Russia is not looking to acquire more; especially given that those sanctions are a counterpoise to the primary goal of President Putin’s foreign policy — economic growth and prosperity.

As Russia has stated time and time again, it is not interested in interfering with the affairs of other countries. This time around is no different. Russia has nothing to gain and everything to lose from a prolonged hysteria that frames it as the desperado of international relations. And even if the Kremlin wanted to play that role, who would it support? President Trump? The same guy who has levied more sanctions against Russia (often unwarranted). The same guy who has lobbied against the Nord Stream 2 pipeline, pulled out of the INF Treaty, permitted airstrikes that killed Russian nationals in Syria, provided lethal military aid to Ukraine, and sought regime change in countries like Venezuela — places where Russian energy companies have billion-dollar contracts? Or what about Joe Biden and the rest of the Democratic frontrunners? All of which have expressed a deep-seated aversion for Russia.

Therein lies the absurdity. Russian interference will be a constant topic of conversation on cable television in 2020, but Russia itself will be absent from the elections because it has nothing of value to gain. And just like in Aesop’s fable, the moral of the story will be that fearmongers (in this case, American media) will be rewarded with the circumstance that “even if they tell the truth, no one will believe them.”

Prediction #3: Expect Russia and the United States to extend the New START Treaty

Perhaps the BIGGEST and most crucial forecast for 2020 is the expectation that Russia and the United States will begin negotiations towards extending the New START Treaty — the only remaining nuclear arms reduction pact between the two countries — that is set to expire in 2021. Up until this point, Russia and US relations as it relates to nuclear arms control have been on a downward spiral. More accurately, the United States pulled out of the Intermediate Nuclear Forces (INF) Treaty just this past August, a move that was harshly criticized for potentially destabilizing global security. The INF is likely a relic of the past, but when it comes to the New START treaty, there are legitimate reasons to be optimistic that diplomacy and dialogue will prevail in this upcoming year. 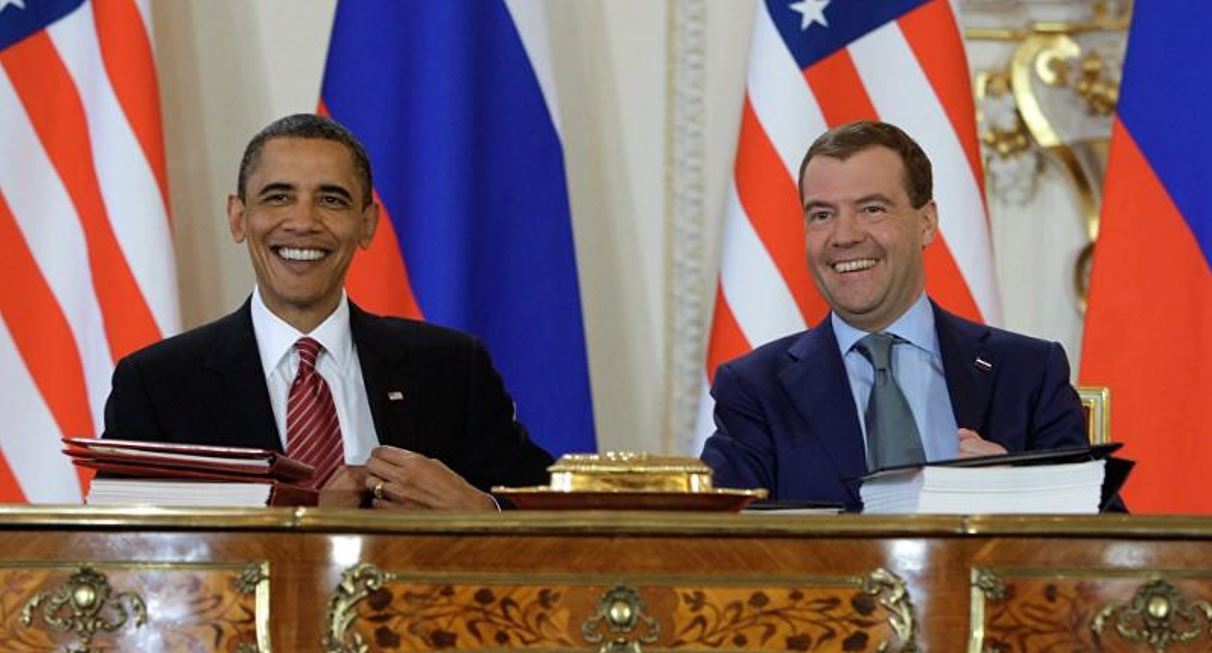 President Obama and President Medvedev at the signing of the New START in April 2010.

For example, earlier this month, President Putin offered to extend the New START treaty without any preconditions immediately. This demonstrates a serious willingness, at least on Russia's part, to preserve the Soviet-era compromise that limits the number of deployed nuclear forces and provides an important verification system that holds both parties in check.

And although in the past, President Trump has erroneously called the treaty a “bad deal” for the United States, the Trump administration should have ample incentive to get itself a much-needed foreign policy win going into the 2020 elections. In fact, New START, by all accounts, should be an easy win. It should require less negotiation and diplomatic resources because it involves extending an existing deal as opposed to working off a blank slate.

More than that, it’s a great deal for the US that President Trump can advertise on the campaign trail in front of his constituents. The US has 155 more deployed strategic launchers than Russia under the current deal, and the treaty has actually forced Russia to make reductions to the number of warheads it loads on some of its missiles. Even Trump’s Democratic opponents, like Bernie Sanders and Elizabeth Warren, recognize these and other benefits and are in favour of extending the New START Treaty.

Trump will visit Moscow in May of this upcoming year for Russia’s annual Victory Day celebrations. This will signify the first full summit between Putin and Trump, which will likely result in both sides pledging certain deliverables. Look for the United States and Russia to extend the New START Treaty for a few more years, and possibly even launch a broader multilateral discussion on the future of strategic stability.

FOLLOW THE LATEST DEVELOPMENTS
Project
Russia and the US: Problems in Bilateral Relations, Regional and Global Challenges
USA, Russia, Forecasts, 2020, INF Treaty, Russophobia, Elections
Reader's choice
HideShow
Twelve Steps Toward Greater Security in Ukraine and the Euro-Atlantic Region
A Crisis Management Mechanism in the Middle East Is Needed More Than Ever
A Plea to Save the Last Nuclear Arms Treaty
The SWIFT System: A Focus on the U.S.–Russia Financial Confrontation
The Countdown for New START