What Will Be the Impact of the Pandemic on the EU and Russia?

In the near future, Russia and the EU are unlikely to build a security partnership. The COVID-19 pandemic did not give Russia and the EU an impulse to start rapprochement, but the goal of finding common grounds remains on the agenda.

The COVID-19 pandemic has aggravated the difficulties that have existed in the relationship between the US and the EU/European NATO members since the beginning of the Donald Trump's presidency. The Europeans disagree with the US on a number of issues.

Due to the difficult economic situation in EU countries, the increase in military spending that has taken place over the past 5 years, is unlikely to resume. Thus, many European states may not be able to live up to the demands of the Trump Administration. There are disagreements on some issues related to arms control, such as the Europeans being against the breaking of the Open Skies Treaty and EU calls for renewal of START-3.

Against this background, EU interest in strategic autonomy is growing, with France, led by president Macron, being a strong supporter of the idea. Meanwhile other EU member states have taken a pro-American position on security issues. Thus, there is no unity within the EU on the idea of autonomy and the future security model.

In the short and medium term, Russia will be focused on the implementation of constitutional reform, and give priority to internal problems. The pandemic deepens the economic crisis that Russia is experiencing. In this regard, it is likely that the resources allocated for defence and the implementation of foreign policy will be reduced. 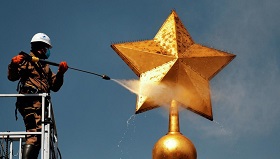 Russia is looking for a way out of the difficult economic situation and trying to secure a worthy place in the world. Amid the pandemic and a changing world order, Russia is focusing on the idea of a Greater Eurasia Partnership. According to Russian Minister of Foreign Affairs S. Lavrov, the implementation of this project will not only strengthen positive economic interconnections and increase the competitiveness of all participants, it will also become a solid foundation for building a space of peace and stability from Lisbon to Jakarta. This project is open to the participation of EU countries. S. Lavrov emphasises that they benefit from taking part in this process. By joining a joint effort, they would be able to secure a distinguished place in the new fairer and more democratic multipolar world.

In the near future, Russia and the EU are unlikely to build a security partnership. The COVID-19 pandemic did not give Russia and the EU an impulse to start rapprochement, but the goal of finding common grounds remains on the agenda.

Tags
Russia, European Union, USA, COVID-19, International security
Reader's choice
HideShow
Expert Opinions on Russia’s Basic Nuclear Deterrence Principles
Shrinking Cyber-Universe
Will There Be an End to the Korean War?
The War in Libya: Is the Defeat of Khalifa Haftar Complete
Waiting for the Intra-Afghan Dialogue to Begin