Reflecting on Greater Eurasia and Its Role in the World

Visiting Professor at the Higher School of Economics

While Russia generally has good bilateral relations with its Asian neighbors, some of Russia’s ideas for future developments are based on fantasy. The most unreal idea is that of Greater Eurasia. While the exact nature of the idea varies depending on who is describing it — with emphasis on security and anti-Westernism a variable — its most enthusiastic exponent (apart from President Vladimir Putin) is a leadership group within the Valdai Discussion Club. This organization will hold a conference in Shanghai on 25–6 April, with the title of “Russia and China: Contemporary Development Challenges.”

While Russia generally has good bilateral relations with its Asian neighbors, some of Russia’s ideas for future developments are based on fantasy. The most unreal idea is that of Greater Eurasia. While the exact nature of the idea varies depending on who is describing it — with emphasis on security and anti-Westernism a variable — its most enthusiastic exponent (apart from President Vladimir Putin) is a leadership group within the Valdai Discussion Club. This organization will hold a conference in Shanghai on 25–6 April, with the title of “Russia and China: Contemporary Development Challenges.” 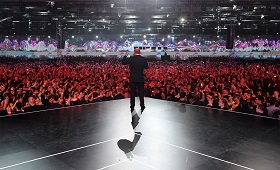 One of the conference sessions concerns ‘Greater Eurasia’, which is described as “Russia's most important geostrategic project.” One of the speakers in this session is Sergey Luzyanin, Director of the Institute of Far Eastern Studies of the Russian Academy of Sciences. In his recent article, Luzyanin explains that “the idea to create a Greater Eurasian Partnership was initially formulated on December 3, 2015, when the President of Russia in his Address to Federal Assembly proposed to initiate consultations on the formation of an economic partnership between the Eurasian Economic Union member states (EAEU), ASEAN and the Shanghai Cooperation Organization (SCO). Throughout 2016, the concept was repeatedly recited at various multilateral venues, having in effect become the flagship of the Russian initiative to develop the Eurasian integration.”

Luzyanin writes that “the ultimate goal is the approval of the EAEC (EAEU) as the central unifying structure in the regional Eurasian integration network”. “The bilateral Russia-China relations and their strategic stability provide a decisive influence on the successful confluence of the Eurasian Economic Union (EAEU) with the ‘Belt and Road’, and the future formation of the Greater Eurasian Partnership. For Russia, the priority site in Eurasia is the EAEU.”

Luzyanin writes that “strengthening security and economic cooperation in the Eurasian center is the key task of SCO, which expanded from six to eight permanent member format in 2017. The entry of India and Pakistan means qualitative evolution of the Organization, its regional status being shifted to the global structure level. Any potential tensions within the Organization among individual members were informally stabilized by the Russian-Chinese ‘axis’ both before and after the SCO expansion. Russia and China together with India, Pakistan and the Central Asian states are ready to offer a qualitatively new set of high technology, investment, banking, transport and other services in the areas of trade and economic cooperation”. 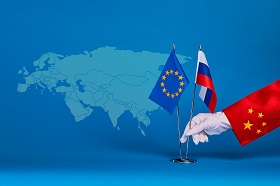 Let’s look at some of these claims in more detail.

Firstly, there is little sign that China considers the EAEU as a serious partner. Instead, it prefers to deal with EAEU members on an individual basis. For example, the official Chinese documentation for the May 2017 Belt and Road Forum hardly mentioned the EAEU, even though there were many mentions of other multilateral organizations. Indeed, there also few mentions of Russia.

In contrast, individual Central Asian countries are mentioned quite a lot — particularly Kazakhstan — and about China’s trade and investment relations with them. There is reference to “dovetailing” the SREB part of Belt and Road to Kazakhstan’s Nurly Zhol (Bright Road) and to cooperation agreements with Tajikistan, Kyrgyzstan and Uzbekistan.

Perhaps the only saving grace for Russia is that in his speech at the Opening Ceremony on 14 May, Xi Jinping said that “we have enhanced coordination with the policy initiatives of relevant countries, such as the Eurasian Economic Union of Russia, the Master Plan on ASEAN Connectivity, the Bright Road initiative of Kazakhstan.” Kazakhstan gets a special mention despite being a part of the EAEU.

Secondly, the idea that tensions within the SCO caused by the admission of Pakistan and India have been “informally stabilized by the Russia–China ‘axis’” is ludicrous. In fact, India is deeply suspicious of Pakistan, and to a lesser degree of China. In particularly, the China Pakistan Economic Corridor raises Indian hackles.

Ernesto Gallo, Giovanni Biava:
One Belt, One Road, and Seven (Not So) Giants…

P. Stobdan, of the officially financed Indian IDSA, wrote that “India joining the SCO has largely a symbolic meaning.” He adds that “there is lack of clarity about what it means for India in terms of any specific function and benefits.”

China agreed to let India (and Pakistan) join the SCO because China itself now largely sees the SCO in symbolic terms. China, for a number of years, tried to get Russia to agree on a greater economic focus within the SCO. But Russia refused, and instead continued to push its idea of — in the words of Luzyanin — the EAEU as the “central unifying structure in the regional Eurasian integration network.” China seems to now have moved on. The “Belt and Road”, in its view, is such a success that it does not need the SCO except as a regional discussion group.

Thirdly, ASEAN members fail to reach common ground on anything, which makes the organization unreliable in serious matters.

A positive feature of Luzyanin’s commentary is that he does not emphasize the security aspects of the Greater Eurasia idea. This is in contrast to those, including Sergei Karaganov, who envisage a grouping with China as “a leading provider of financial and technological resources, and Russia, leading in diplomacy and security building.” It seems that no one outside of Russia takes such suggestions seriously.

In some ways it does not matter to the rest of the world (including Asian countries) if Russia has unrealistic dreams about Greater Eurasia and its place in it. It is Russia who will suffer from them. However, the world will be better-off if Russian policy makers have a more realistic view of the world around them than is often apparent in their expressed views and policy implementation.

One Belt, One Road, and Seven (Not So) Giants…

Greater Eurasia: Perceptions from Russia, the European Union, and China

Can Russia and the European Union cooperate within the new reality? What are the new mechanisms for EU-Russia cooperation? EAEU and SREB. Perceptions from China

EAEU Development Prospects up to 2025

Tags
Greater Eurasia, EAEU, OBOR, China, SCO, India, Pakistan
Reader's choice
HideShow
What’s the Purpose of India’s Military Base in Mauritius?
Will Geneva Be Any Different Than Helsinki?
To Stay or Not to Stay? Seven Concerns Russia Has about the OSCE
Ryanair Incident: Five Sanctions Risks for the Republic of Belarus
Modern World Order: Structural Realities and Great Power Rivalries