In an interview for the Interfax news agency, Igor Ivanov, President of the Russian International Affairs Council and former Minister of Foreign Affairs of the Russian Federation (from 1998 to 2004) shared his thoughts on the U.S. presidential election’s results, pointing out the areas Russia’s future dialogue with the new administration should be dedicated to.

In an interview for the Interfax news agency, Igor Ivanov, President of the Russian International Affairs Council and former Minister of Foreign Affairs of the Russian Federation (from 1998 to 2004) shared his thoughts on the U.S. presidential election’s results, pointing out the areas Russia’s future dialogue with the new administration should be dedicated to.

What are your thoughts about the results of the presidential election?

First of all, I would like to congratulate Mr. Trump. It was an extremely difficult, tense and exhausting election campaign. The President-elect, in his own words, worked very hard to win, which makes the price of this victory yet much higher.

Many people in Russia had their bets on Trump winning. Why?

I think there are two factors here. On the one hand, for whatever reason, our media consistently portrayed Mr. Trump as a “friend” of Russia, a person with whom it will be easier to do business. On the other hand, there is a strong feeling inside Russia that Hillary Clinton, and the Democratic Party as a whole, is an irreconcilable enemy of Russia. Without a doubt, all of this would have had an effect on public opinion in Russia. 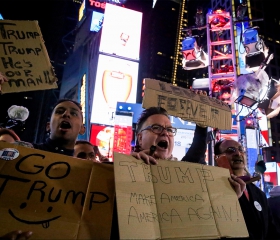 How do you think the election results could affect U.S. foreign policy?

Unfortunately, the election campaign looked more like a mud-slinging contest than anything else. Niether of the candidates offered a comprehensive plan of action with regard to foreign policy. But a clearly defined foreign policy programme was precisely what the global community wanted to hear. Let’s hope that the fervour of the election will calm down and the new administration will form its foreign policy priorities.

Russia was perhaps one of the main topics during the presidential debates. And it was usually discussed in a negative light. How could this affect Russia–U.S. relations moving forward?

It is true that the topic of Russia was blown out of all proportions during the debates, and with no good reason. Unfortunately, Russia also got involved in the mud-slinging. I would really like Washington and Moscow to put emotions aside and start a constructive dialogue on the problems that actually do affect both countries’ national interests. And we all know what these problems are: the war on terrorism and other forms of extremism; stepping up the strategy against the proliferation of weapons of mass destruction; restoring governability in international relations; resolving regional issues, etc. These vital for international security issues can only be tackled with Russia and the United States cooperating with each other.

Who should take the first step towards rebuilding relations? Moscow or Washington?

Whoever takes the initiative will be playing a very significant role in the history of our planet.