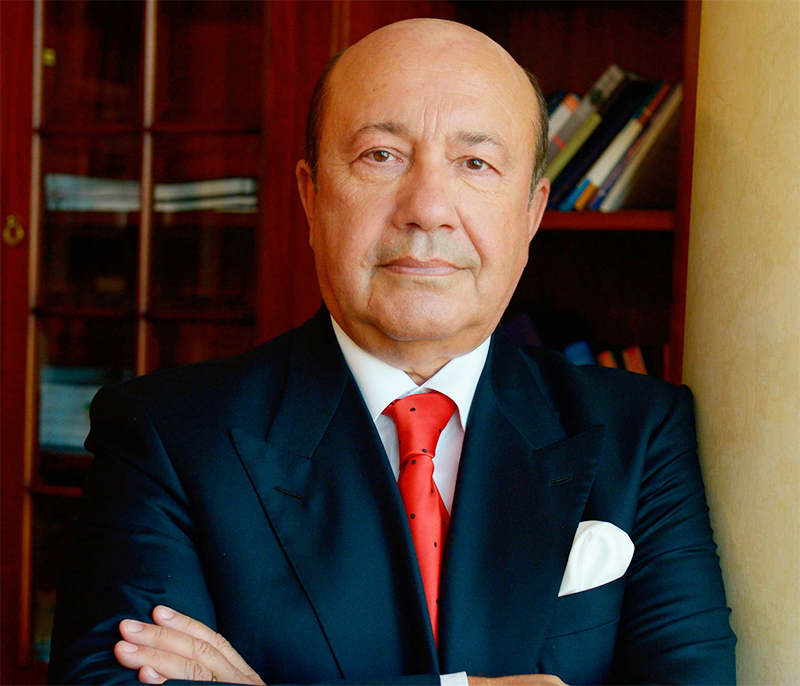 Conducted academic research at the Institute of World Economy and International Relations of the USSR Academy of Sciences. Worked in the European department of the USSR MFA, and was later posted in Spain (in the roles of first secretary, then counselor, then counselor-envoy).

From 1991 to 1993, Soviet Ambassador and then Russian Federation Ambassador to Spain.

Author of books and articles on the history of international relations and Russian foreign policy.

Recipient of state awards from Russia and foreign countries.

Dialogue, diplomacy and negotiations are the only acceptable route to resolving the conflict in a way that can stand the test of time

The latest developments on the Ukrainian case will undoubtedly have far-reaching ramifications—for the Russian-Ukrainian relations and, more broadly, for security in Europe and globally

The day of February 16, 2022 will come to be a remarkable moment for the history of contemporary international relations

Russia-NATO: On the History of the Current Crisis
Igor Ivanov
0
6056

Are there any forces that might actually be interested in a full-blown rather than a propaganda war in Ukraine?

In memory of Colin Powell

Lack of dialogue between Russia and NATO is fraught with risks that are too high for all the parties. These problems can surely be covered up and left to fester beneath the surface. For how long…

We are all facing a stark choice: either unite against new challenges or become hostage to the various extremists and adventurers

It is unlikely that we will see any breakthroughs at the upcoming Putin-Biden summit—but despite all the difficulties, there are still signs for optimism

We need to prepare ourselves for long and difficult negotiations

No matter what anyone says, Russia is an inseparable part of Europe, just as Europe cannot be considered “complete” without Russia

Why Is Europe Hostile Towards Russia?
Igor Ivanov
0
8474

Russia and U.S. Must Not Squander Chances For Cooperation
Igor Ivanov
0
4349

Variables and constants of Russia–U.S. relations

Choice without a Choice
Igor Ivanov
0
4422

As the John Kenneth Galbraith once said, “Politics is not the art of the possible. It consists in choosing between the disastrous and the unpalatable”

Experts agree that a positive shift in U.S.-Russia relations could jump-start the process of advancing a healthier global atmosphere

Russia and the U.S.: Time to Look for Compromises
Igor Ivanov
0
5123

For the first time in living memory, humanity is confronting a common threat that it must defeat collectively. It is time to start planning for when the eventual victory comes

A Plea to Save the Last Nuclear Arms Treaty
Igor Ivanov, Madeleine Albright
0
7401

Russia and Europe are parts of a great, dynamically developing Eurasian space. There are many other actors here. Everyone has their own interests and plans. It is up to us to decide whether Russia…

Russia has already demonstrated effective crisis management skills. Now it has the opportunity to show that it is also an experienced design engineer

The Belt and Road Initiative: Towards a New World Order
Igor Ivanov
0
11291

Donald Trump’s presidency should serve as a shock for the international community, forcing it to arise from the sweet slumber of recent decades

Why Should We Be Grateful to Donald Trump?
Igor Ivanov
0
12176

We can say with full confidence that Russia and China, whose combined political, economic and military potential assure their influence in the world, will form key centres of this world order

Speech at the Opening of the 5th International Conference “Russia and China: Cooperation in a New…
Igor Ivanov
0
3183

The greatest challenge of our times is a deficit of solidarity between nation states, including those of them, which are entrusted by the United Nations Charter with a special responsibility to…

In Paris, 100 years after the guns across Europe fell silent, leaders can begin taking important steps to ensure a new and devastating war will not happen today

After Ditching the INF Treaty, the U.S. Risks Further Isolation

The best way to knock the “Russian card” out of the hands of political profiteers is to implement a well-balanced, long-term and consistent strategy of Russia’s relations with a specific state or…

The “Russian Card” in the International Game
Igor Ivanov
0
12631

New Technologies and New Challenges of Global Politics: A View from Russia

Reaffirming that a nuclear war cannot be won and must never be fought, the United States and Russia could agree to specific steps at Helsinki to reduce nuclear risks

A personal meeting between Vladimir Putin and Donald Trump is the only thing capable of breaking the vicious cycle in Russia–U.S. relations and launching them towards a state that is acceptable for…

After the vote, Moscow will try to thaw relations with Europe and explore new routes in Asia. Successe abroad is key to improving the situation at home.

In the Euro-Atlantic region today, the risks of a fateful error leading to nuclear conflict are compounded by heightened tensions between NATO and Russia – and little communication between military…

Cyberspace will increasingly resemble a huge and ever-growing stream of "turbid water" where everyone, including terrorists, can catch their "fish", avoiding any responsibility…

Moscow and Brussels are to keep pace moving forward

Russia and Europe: From Romanticism to Pragmatism
Igor Ivanov
0
16311

How to build relations with the United States? Russia is not the only country asking itself this question

What strategic trajectories can Europe and Russia choose from and how do these trajectories relate to each other?

The ministers even starting to talk about mutual trust

Is the All-Time Low in Russia–UK Relations behind?
Igor Ivanov
0
18665

The way out of the current crisis in Russia–U.S. relations is not feasible in the short-term perspective.

One Year after the U.S. Presidential Elections
Igor Ivanov
0
9575

The event that some politicians tried to prevent and which others, on the contrary, tried to hasten, has arrived: U.S. President Donald Trump has signed a law that expands the sanctions package…

It is a win-win situation for both sides, and no one has lost

What Does the Future Hold? Reflections Regarding the Hamburg Meeting
Igor Ivanov
0
20919

Igor Ivanov’s speech at Center for Strategic and International Studies

Igor Ivanov: Russia-U.S. Cooperation: If Not Today, It Will Come Tomorrow
Igor Ivanov
0
5596

Europe, the US, and Russia are confronting a range of significant issues today. The practical near-term steps that we have identified here are the right place to begin. We need to start now.

The U.S.-based Nuclear Threat Initiative (NTI) and the Moscow-based Center for Energy and Security Studies (CENESS) launched a new joint report on the future of U.S.-Russian nuclear cooperation

It is usually easier to achieve an agreement with experienced professionals

Igor Ivanov’s address to the second meeting of European Union and Russian experts in Berlin, April 6, 2016

We Need Cooperation, Not Confrontation

A Diagnosis from Munich
Igor Ivanov
0
7843

How Can We Ensure National Security in the 21st Century?
Igor Ivanov
0
6881
Is a Collective Security System Possible in the Middle East?
Igor Ivanov
0
1761
Remarks at the meeting of the UniCredit International Advisory Board
Igor Ivanov
0
20915
Russia and Europe: New Rules of the Game
Igor Ivanov
0
13361
Speech at the Greater Europe Task Force Meeting, London
Igor Ivanov
0
3832

Russia and EU are in separate boats now, but they are sailing in the same direction
Igor Ivanov
0
16862

Speech at the 20th Annual International Conference of the Baltic Forum “The US, the EU and Russia – the New Reality”, 12 September 2015, Riga, Latvia

We must formulate and act on new proposals now, before Europe is split for another generation

Instead of a new Cold War, someday we could face a real, large-scale military conflict

Russia, Turkey and the Vision of Greater Europe
Igor Ivanov
0
3856

Can Bombs Ever Be a Substitute for Diplomacy?
Igor Ivanov
0
2666
The Risk of a New Cold War
Igor Ivanov, Malcolm Rifkind
0
2919

Any crisis is a test for all concerned

What comes after Geneva?

Ukraine is sick now. And it is not a minor cold, but a dangerous fever

We Need to Build Greater Europe

Only cooperation between Moscow and Washington can solve the Middle East's most vexing problems.

On Syria and Iran, U.S. and Russia Can Work Together
Igor Ivanov, Madeleine Albright
0
2814

We do not have any serious bilateral discussions of nuclear matters between Moscow and Washington. We should restore communication lines.
Nuclear Disarmament USA Russia START III Treaty
0
0

Ukraine is at crossroads of history
Ukraine
0
1677

Political will is not enough
Russia USA Perezagruzka
0
2884

What Diplomacy Does Russia Need in the 21st Century
0
2200

Madeleine Albright passed away. We express our deep condolences to her close ones, her colleagues, her friends.