In the Skies over Syria: Rivalry Instead of Coordinated Actions

Ambassador Extraordinary and Plenipotentiary of the Russian Federation, RIAC Vice-president

On June 19, 2017, the Ministry of Defence of the Russian Federation announced it was halting interaction with the United States as part of the memorandum of understanding to minimize the risk of in-flight incidents between aircraft operating in Syrian airspace. The move came in reaction to the downing of a Syrian Air Force Sukhoi Su-22 warplane by a U.S. Boeing F/A-18E Super Hornet. Russian International Affairs Council (RIAC) member and Ambassador Extraordinary and Plenipotentiary of the Russian Federation Aleksandr Aksenenok offers his appraisal of the current situation in the east and southeast of Syria in an interview with RIAC.

On June 19, 2017, the Ministry of Defence of the Russian Federation announced it was halting interaction with the United States as part of the memorandum of understanding to minimize the risk of in-flight incidents between aircraft operating in Syrian airspace. The move came in reaction to the downing of a Syrian Air Force Sukhoi Su-22 warplane by a U.S. Boeing F/A-18E Super Hornet. Russian International Affairs Council (RIAC) member and Ambassador Extraordinary and Plenipotentiary of the Russian Federation Aleksandr Aksenenok offers his appraisal of the current situation in the east and southeast of Syria in an interview with RIAC.

Do you believe the actions of the United States can be construed as a deliberate act of aggression?

When it comes to the Syrian conflict, which is very specific and multifaceted in every respect, nothing can be stated with absolute certainty. Many aspects are intertwined here, relating to diplomacy, the military, politics (both global and regional), media and propaganda. Very often one aspect contradicts and even eclipses another. As a result, an extremely vague picture emerges.

From a formal legal standpoint, the actions of the United States can indeed be construed as an act of aggression. And this would hold true in reality as well if it were not for the specifics of the political and military situation in Syria. External military intervention in the Syrian conflict has long been a reality, at least since 2012 when the U.S.-led anti-terrorist coalition was created. Unlike the Russian Armed Forces which are present in Syria at the request of the Syrian government, the coalition’s operations in the country have no formal international legal basis. The same can be said of the military presences of Turkey, the United Kingdom, France and other coalition members in the country.

At the same time, if we look at the situation from the standpoint of Realpolitik, then the involvement of a great number of external actors effectively turns Syria into a country with limited sovereignty. This is all the more so given the fact that vast territories in the east of the country are not controlled by the Syrian government. Despite this, Russia has maintained regular military and diplomatic contacts with the United States and the other western members of the coalition throughout the conflict. Close cooperation has been established with Turkey following the normalization of mutual relations. However, if [the actions of the United States] are to be described as aggressive, then the question arises as to why Russia’s response to the actions of the United States and its allies in Syria so often lacks understandable logic and consistency: at times we call them aggressors, at others we see them as partners or even potential allies in a global anti-terrorist coalition. 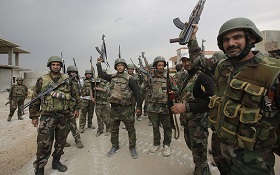 Kirill Semenov:
The Syrian Armed Forces Seven Years into the Conflict: From a Regular Army to Volunteer Corps

The answer to the question of how to assess the actions of the United States lies in the context of the specific situation that has developed in the east and southeast of Syria. It appears that the military operations being carried out by all the parties involved in those regions have entered a new and more dangerous phase.

The government forces have consolidated their control over the western parts of Syria, while the Islamic State is under attack from different sides. The focus of the hostilities has shifted to the area of Daraa in the south of the country, close to the border with Jordan and Iraqi. Who will take the territories that are currently being liberated from Islamic State? Who will capture such strategic and economically important areas such as Raqqa, Deir ez-Zor, Mayadin and Al-Bukamal? Will it be the Syrian Democratic Forces (SDF), which enjoy military support from the United States and whose core is comprised of Kurdish combat detachments? Or will it be the government troops and the pro-Iranian Shiite militia forces, which maintain contacts with Russia?

The incident involving the Syrian aircraft fits into the complex context of the rivalry that is currently observed in Syria, rather than coordinated actions. Both Russia and the United States have their theories as to what happened. There is, however, a serious threat to be found elsewhere. In the absence of multilateral agreements, it is quite possible that diverse and unexpected forces could resort to acts of provocation in order to set Russia and the United States against each other. This happened more than once in the past, especially as the two countries were nearing mutually acceptable compromises. It is equally possible that provocations will be staged by Islamic State terrorists, who are not only leaving their positions in Raqqa now under pressure from the SDF advancing from the south, but are also being drawn out of a number of important population centres in the north, thus clearing the way for a confrontation between the forces that have never managed to become allies in the fight against the common terrorist threat.

Russia has warned the U.S.-led coalition that it will now be viewing manned and unmanned coalition aircraft as possible targets. Is it possible that this statement will be backed up in practice?

Alexey Khlebnikov:
Will U.S. Attack on Syria Be a Game-Changer?

Such categorical statements certainly raise Russia’s status as a strong power whose interests are to be reckoned with, particularly in Syria. On the other hand, they burn bridges for Russia should it be forced to deliver on its warnings. In such a situation, failure to act would be perceived as a sign of weakness. Strong words do not bring benefits in the Syrian context. They may backfire catastrophically.

Apart from accusing Washington of violating Syria’s sovereignty and international law, Moscow has also announced that it is halting communications aimed at preventing possible friendly fire incidents between Russian and U.S. forces. Could this channel of communications be restored in the near future, and if it could, then on what conditions?

The experience of de-escalation in different conflicts suggests that in such cases communications need to be boosted along available military channels in order to prevent inadvertent incidents. Events will no doubt take this turn soon. An alternative would be a clash between Russia and the United States, which would have unpredictable grave consequences.

Rate this article
Share this article
FOLLOW THE LATEST DEVELOPMENTS
Project
Security System in the Middle East
Related materials
Will U.S. Attack on Syria Be a Game-Changer?

The chemical incident in Idlib brought to nothing all the last months' efforts, aimed to normalize the situation in Syria

The Syrian Armed Forces Seven Years into the Conflict: From a Regular Army to Volunteer Corps

Tags
Russia, Syria, Islamic State
Reader's choice
HideShow
Russia's “Wait and See” Policies and the Libyan Settlement
A Bumper Year for OFAC
The Trans-Caucasus in 2019 Is Not a Monolithic Region
Four Pieces of Advice to Emmanuel Macron about the INF Treaty
Sanctioning the Pipelines: Implications for Russia, the EU and the U.S.