The Syrian Armed Forces Seven Years into the Conflict: From a Regular Army to Volunteer Corps

Ever since civil war broke out in Syria, the Bashar al-Assad regime has carried out measures to adapt the armed units that were loyal to him to the conditions of the conflict within the country, a conflict for which they were wholly unprepared.

The article aims at providing insight into dynamics of structural changes of the military forces and armed units which support Damascus during the conflict. 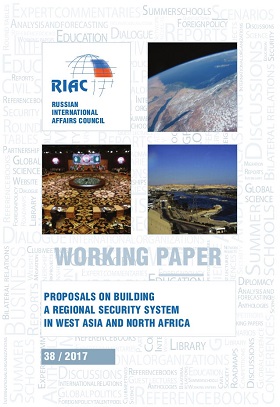 The most serious problems of the regime during the initial stages of the war were manning the SAA, the absence of mobile forces and light infantry capable of quickly plugging in holes in the event of a threat arising and carrying out military operations in urban conditions and in areas with difficult terrain.

Ever since civil war broke out in Syria, the Bashar al-Assad regime has carried out measures to adapt the armed units that were loyal to him to the conditions of the conflict within the country, a conflict for which they were wholly unprepared.

In particular, the Syrian Arab Army (SAA) was dominated exclusively by heavy armoured and mechanized infantry divisions. There was an overabundance of tanks and other armoured vehicles and a serious lack of light, mobile and well-trained units. They also had a cumbersome organizational structure and were unable to cope with the tasks given to them in the course of the civil war.

Mass desertion finally put paid to the combat effectiveness of these divisions, with the exception of the 4th Armoured Division, the 14th and 15th Special Forces Divisions and the Republican Guard. The combat-ready components of the remaining divisions, whose headquarters were also military sector headquarters, were segregated to make up one of four organic brigades. These brigades served as the basis for territorial or positional forces.

Most of these divisions and brigades, along with their designation, were combat-ready on paper only, or in news bulletins. In reality, they are far from the well-trained military groups they are purported to be and resembled the divisions and brigades of the Russian Army that fought in the First Chechen War far more closely. This situation continues to this day. The second fall of Palmyra in December 2016 clearly demonstrated this. The most serious problems of the regime during the initial stages of the war were manning the SAA, the absence of mobile forces and light infantry capable of quickly plugging in holes in the event of a threat arising on a given front, and carrying out military operations in urban conditions and in areas with difficult terrain.

It should be noted that brigades and battalions of the 4th Mechanized Infantry Division served as mobile armoured and mechanized infantry units (which were used throughout Syria) in the areas under the greatest threat, with reinforcement from units of other “heavy” divisions. The tank and mechanized infantry battalion tactical groups of these formations were often used in conjunction with units of the 14th and 15th Special Forces Divisions, thus providing armoured support to them. Lebanese Hezbollah detachments were subsequently used as an infantry component of the 4th Mechanized Infantry Division on a regular basis. One such example was during the fighting in Aleppo.

Nevertheless, all the combat-ready units of the SAA were clearly insufficient, both for carrying out offensive operations, and for defending so-called “Useful Syria”. It is unlikely that the SAA numbers more than about 70,000 – 80,000 troops at present.

Shabiha and the National Defence Forces

The regime has not been able to restore full combat-readiness to the SAA due to the fact that the majority of potential conscripts evade national service. Throughout 2012, the armed forces were able to fortify their infantry units through the formation of large numbers of irregular armed paramilitary structures of various origins by local party cells of the Arab Socialist Ba’ath Party, wealthy businessmen associated with the Bashar al-Assad regime, and even criminal networks. These groups have been given the collective name “Shabiha,” which has some 40,000 soldiers in its ranks – although this number is likely to have grown since the group’s inception. 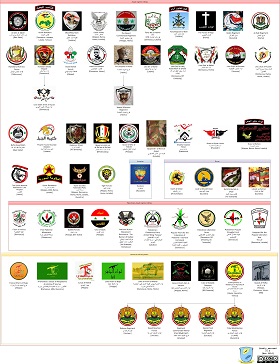 Shabiha saved the army’s dwindling numbers and in certain cases proved to be far more effective and resilient in battles within cities and in the defence of village settlements than the SAA.

Contrary to popular belief, not all Shabiha groups are Alawites. Some are made up of Sunnis. For example, in Aleppo the role of Shabihi was played by the Sunni gangster clan “Barry,” famous for its cruelty.

In 2013, the Syrian authorities established the “National Defence Forces” (NDF), which are subordinated to the “Popular Committees.” Iranian military advisers took part in making-up these formations.

Given the fact that even with the help of the NDF, the SAA was not in a position to reverse the course of the war, “Shiite jihadists” started to emerge in the country during this period. They have since become an integral part of the regime’s armed forces. The most famous of these groups are Lebanon’s Hezbollah and numerous Iraqi groups, such as Liwa al-Zulfiqar and Liwa Asadullah al-Ghalib, which emerged as the followers of the Shiite jihad “pioneers” in Syria from the Iraqi forces – Liwa Abu Fadl al-Abbas and a conglomerate of Iraqi Shiite groups associated with Asaib Ahl al-Haq.

Units that are directly subordinated to the Iranian command of Al-Quds also operate in Syria. These include, in particular, the Fatemiyoun Division recruited from Afghan Shiites (which number 18,000 in camps in Iran, with 3,000–5,000 of these serving in Syria on a rotational basis) and the Pakistani Zeynabiyun.

Many of these foreign Shiite groups start to form “sister structures” in Syria – structures that are either directly connected to these groups or financed using Shiite funds. This is what forms the so-called “Syrian Hezbollah,” which includes National Ideological Resistance forces (local branches of the Lebanese Hezbollah) as well as the Syrian Islamic Resistance Formation, partly made up of local Syrian factions of Iraqi Shiite groups. These forces consist of Syrian citizens – both Shiites and “Khomeini-ized” Sunnis and Alawites. For example, the Iraqi Kataib Sayyid al-Shuhada set up its local branch with Syrians from Liwa al-Sayyida Ruqayya. Meanwhile, Liwa Imam Zayn al-Abidin, which is active in the besieged city of Deir ez-Zor, is one of many branches of the Lebanese Hezbollah in Syria. The majority of these factions have never been a part of the NDF and enjoy the same degree of independence they have always had.

All the combat-ready units of the SAA were clearly insufficient, both for carrying out offensive operations, and for defending so-called “Useful Syria”.

Other groups have, on the contrary, even become a part of the SAA. For example, the 4th Mechanized Infantry Division includes a Shiite regiment of Liwa Sayf al-Mahdi, the local (that is, the Syrian) Hezbollah. The total number of militants with connections to Iran can be estimated at 130,000, of which 30,000 are foreign Shiite fighters and 100,000 are Syrian Shiite groups and divisions of the NDF.

The Tiger Forces appeared in autumn 2013, deploying a division of the same name. The fact that such forces appeared in the first place is a reflection of the general decline of the regular units of the SAA, as well as its decentralization and the chaotic nature of its organization.

Shabiha saved the army’s dwindling numbers and in certain cases proved to be far more effective and resilient in battles within cities and in the defence of village settlements than the SAA.

Initially called upon to be another “elite division” of the army, these forces found serious sponsors associated with Air Force intelligence who essentially followed their own agendas. As a result, they do not so much strengthen the 14th and 15th Special Forces Divisions as they do the exact opposite – weakening them by taking their most experienced fighters. 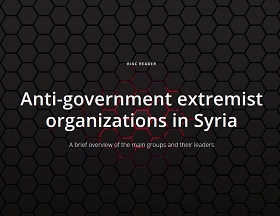 The fact that such forces appeared in the first place is a reflection of the general decline of the regular units of the SAA, as well as its decentralization and the chaotic nature of its organization.

Russia Leaves Its Mark in the Form of Volunteer Assault Corps

Finally, the 4th Volunteer Assault Corps was set up in Lattakia Province with the help of Russian military advisers. The Coastal Shield Brigade that was formed in Lattakia from local Alawite volunteer soldiers with the support of the Republican Guard served as an example.

The 4th Corps differs from the militia and territorial NDFs in that serving in the corps is not an alternative to serving in the SAA. The corps was supposed to be made up of veterans who had already served in the army, or of people who had for one reason or another had been exempted from their national service. In reality, however, fighters are recruited, as is often the case, by enticing them away from other competing structures – in other words, from the Army and NDF. Upon joining the Corps, soldiers continued to receive their regular salaries, plus additional wages, which suggests that there is serious funding behind the corps.

The formation of the 4th Corps was followed by that of a closely related structure, namely, the 5th Volunteer Assault Corps, this time a national, rather than a regional (Lattakian) grouping. The corps will also include “hidden reserves.” In particular, amnesty insurgents and deserters, as well as other people avoiding military service will serve in its brigades. At the same time, there is a serious material incentive for joining the corps, as pre-war salaries and military awards have been preserved.

While the 4th Corps was deployed exclusively in Lattakia and was primarily experimental in nature, the 5th Legion is spread across the entire country. The conditions for serving in the 5th Legion are slightly different too. It is likely the 5th Legion will work closely at military facilities with the units from which it has been formed (the 5th Armoured Division and the 15th Special Forces Division). This gives the Russian command significant independence in terms of carrying out military operations without the need to involve pro-Iranian forces and change the course of an operation to suit them. This raises a concern for Tehran. According to some sources, Iran is insisting on a more active role in the creation of the 5th Legion.

What is more, strengthening the Republican Guard may well become the new trend in the development of the armed forces. After all, it is the Republican Guard that will eventually absorb the most combat-effective parts of the SAA. The new tactical formation being set up in Aleppo – the 30th Division of the Republican Guard – to unite all the units and divisions of the Syrian Arab Army that are active in the city, could serve as a model here.