The Russian International Affairs Council invited Ethiopia’s Ambassador to Russia, His Excellency Alemayehu Tegenu Aargau, to talk about the current developments taking place in his home country, outlining the prospects of bilateral relations between Moscow and Addis-Ababa.

The Russian International Affairs Council invited Ethiopia’s ambassador to Russia, His Excellency Alemayehu Tegenu Aargau, to talk about the current developments taking place in his home country, outlining the prospects of bilateral relations between Moscow and Addis-Ababa. 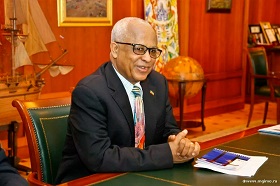 Prime Minister Abiy Ahmed coined the notion of “medemer” (multiplication/synergy), which is all about being considerate of collective interests rather than pursuing narrow self-interest. This concept rejects the assumption that politics should always be a “zero-sum” game and thus implies a change in social and political relations in the country. What has “medemer” help to change over these few years? What remains to be done?

Let me start from what “medemer” essentially is. It first appeared in the book of the Nobel Prize winner and Ethiopia’s Prime Minister Abiy Ahmed when he came to power in 2018, and in this book the Prime Minister advocated for fresh, Ethiopia-centric approach to the country’s politics. He cited the past half a century when previous administrations applied successful ideologies and theories from outside of Ethiopia—but these failed in our country, being poorly aligned to Ethiopian problems and realities. Abiy calls for reversing the trend of importing ideologies and embracing an ideology that emanates from Ethiopian social and political context and corresponds to the country’s historical and cultural values.

As you know, Ethiopia also imported some ideologies from outside, including socialism from the Soviet Union. That way of approaching the country’s politics and economy does not work. The solution has to come from the inside, and this is the main focus of “medemer”.

“Medemer” envisions many changes. The reform of the country is guided by this concept. We are also applying it to set the strategy for our home-grown economy, focusing on agriculture, manufacturing, mining, tourism and ICT. Our strategy is informed by the “medemer” concept. There are also capacity-building activities which are also guided by “medemer”.

So, you see, this applies to a wide range of situations. For example, if we take the Electoral Board, you’ll see it is now completely different from the past.

“Medemer” is rooted in three timeframes: the past, the present, and the future. The concept draws on the good things from the past, rejecting all the bad things. The good experience of the current situation adds on new ideas and values. We put these two together to arrive at the new ideas for the future generations. In this case, the attitudes of the community at large are changing. Of course, this will take time, but things are progressing well.

Does this concept provide for any final goal? A point at which you realize the “medemer” concept has served its purpose and should be replaced with something else?

There are many industrial parks operating in Ethiopia. They help create jobs, giving impetus to the development of agricultural regions of the country. What are the industries where Russia can assist in creating such industrial parks?

The core idea behind establishing industrial parks is to reduce the time of investment for investors. In this regard, everything is ready for them, which significantly eases the process of investing. For example, inside the industrial parks there is one-stop shopping, where the investors can get all the services they require. Their only input should be installing their machinery within the shortest possible time. Overall, this facilitates the investment and enables the investor to increase its productivity and become more profitable. We have built about 22 such industrial parks across the country, creating job opportunities for millions of Ethiopians and attracting many foreign investors.

As for the origins of the investments, the industrial park is open for all those wanting to invest in Ethiopia, no matter where they come from. In that sense, Russians are welcome to invest, to bring in their know-how and their machinery, and to work for the benefit of themselves and of the country. They will enjoy our country’s enabling conditions, our educated labour force, and our prosperous agroecological climate. We will welcome Russian investors with open arms.

There are different approaches investors can follow in Ethiopia. Some have even built their own industrial parks, which we encourage Russian investors to consider, as it may suit them best. They can learn from the successful experiences of previous investors in our country. If Russian investors would rather use the support of our industrial parks, they are welcome as well. Those investments would complement and consolidate the already established bilateral cooperation that we have with the Russian Federation in different sectors: agriculture, industry, education etc. The opportunity to invest is there, we invite and encourage them. 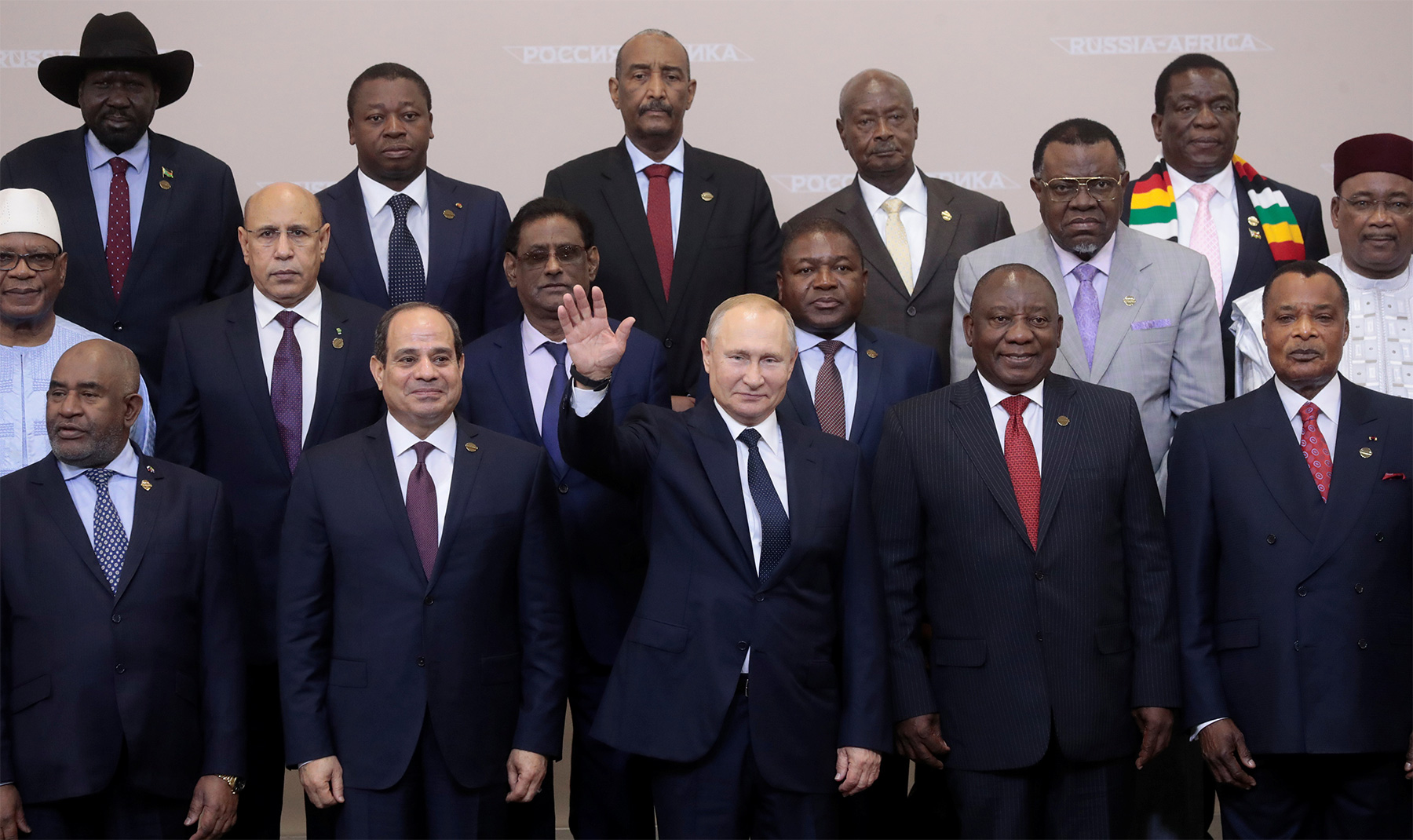 The situation around the Grand Ethiopian Renaissance Dam is widely discussed worldwide. At the same time, there is a gradual transition to clean energy. Why has Ethiopia refused to consider other possibilities to generate electricity, including nuclear power? Can this position change?

The Grand Ethiopian Renaissance Dam is a source of renewable energy, as it generates hydropower for the region. It is important to note that it was not conceived to create problems for the downstream countries. Further, its design intends to avoid any significant impact for those countries. The dam responds to internationally accepted principles of equitability, reasonability, win-win approach, and cooperation. Instead of harming our friends, we plan on sharing the resources that we have with them.

Ethiopia’s electricity grid is connected to Sudan, to which we supply around 200 MW, and to Djibouti, to which we supply 65 MW. In addition to that, we will soon finish the construction of a 2000 MW connection to Kenya. This shows that our electricity generation project is not just for Ethiopia: it benefits the regional electric supply. That is, the concept of Grand Ethiopian Renaissance is not only for our own benefit, but for the benefit of all of Africa. This damn has been discussed all over the world for the last ten years, and it has incorrectly been portrayed by some, namely Sudan, Egypt and some Arab countries. As I’ve mentioned, it does not significantly harm the downstream countries. On the contrary, it will benefit the whole region.

Furthermore, Ethiopia has not refused to consider other sources of electric generation. Currently, our electricity production program includes hydropower, solar power, wind power, geothermal power, as well as waste and nuclear power. We embrace all possible sources of power generation. We have even signed an agreement with Rosatom to develop nuclear energy for peaceful purposes, for generating electricity. This clearly displays what our strategy is about: clean energy. Despite that, our friends are creating narratives that make it seem like Ethiopia focuses only on the Grand Ethiopian Renaissance Dam, disregarding other energy sources.

How does today’s Ethiopia see its place in the world? Is Addis Ababa going to apply for a seat in the reformed UN Security Council?

Ethiopia is the land of origin, it is the place where the human being and coffee originated. Our geopolitical location is of great importance for the Horn of Africa, for Africa, and for the world. Besides, Ethiopia is a resilient nation that has challenged whoever came to our land and never allowed anyone to colonize our territory. We have contributed a lot to the fight against colonialism in other parts of Africa and in the promotion of Pan-Africanism, for which we fight. All for the benefit of Africa. Pan-Africanism is a motto, a concept that benefits Africa and the Africans. It works for Africa’s political, economic and social independence, and involves exercising democracy, equitable utilization of resources, and fighting external interventions.

We, Ethiopia, want to work on economic integration, on people-to-people relations. Thus far, we have started in electric interconnectivity, and we will continue working in this field. As I have already mentioned, Ethiopia is a country with great potential. It has a population of 120 million people, representing a big market for Africa and for the world. 70% of our population are youngsters, which indicates a fairly young working power potential. Our land yields very high-quality agriculture: coffee, oil seeds, flowers etc., and our country integrates mining sites of great importance for the rest of the world. In terms of connectivity, Ethiopian Airlines connect Africa to the rest of the world. Particularly, they fly three times a week from Addis Abeba to Moscow, and we have agreed to increase it to four days a week. They have transported a lot of goods from Africa to Russia and from Russia to Africa and have performed well during Covid-19.

What this data denotes is that our understanding of ourselves is not only working for Ethiopia, but also for Africa. We are committed to the region, to benefit the peoples of the continent. We have a strategy for all of it, for home growth, for integration, and we have already shared it with our neighbours, with whom we have good relationships. Ethiopia will continue fostering the integration in the continent.

Ivan Loshkarev:
Russia’s Policy in a Dynamic Africa: Searching for a Strategy

As for the UN Security Council, we encourage the reform of this institution. This is a particularly important issue, since if the UN Security Council is to continue as it is now, it will not benefit African countries. Ethiopia comprises 10% of the African population, which makes it acceptable for us to apply for a seat. If esteemed convenient, the demand must be presented before the Security Council by our country.

Prime Minister Abiy Ahmed took an active part in the proceedings of the First Russia–Africa Summit. What are Ethiopia’s expectations from the second Summit, which is to be held in 2022?

Ethiopia considers the 2019 Sochi Summit to have been of great significance. Our Prime Minister participated actively and met His Excellency President Putin, with whom he discussed bilateral issues. During the Summit, our Prime Minister invited the African leaders and the Russian government to host the Second Russia-Africa Summit 2022 in Addis Abeba. Ethiopia has the capacity to host such an event: we have a lot of suitable facilities, and we are the venue for the African Union Conference Center, headquarters of the African Union. Of course, the decision is to be made by the Russian government, but we are ready to host the Summit.

We expect the Second Russia-Africa Summit to discuss the outcome of the implementation of the 2019 Sochi Declaration and to give some direction on how to continue cooperation with African countries. The previous Summit opened a lot of opportunities and resulted in many Russian companies trying to find their place in Africa. For that reason, we must encourage them to participate in our investment opportunities in fields such as manufacturing, agriculture, mining, tourism, electricity, and military-technical cooperation. Therefore, Ethiopia supports the Summit and expects successful results from the Summit in the mentioned areas. We are ready to cooperate with the government of the Russian Federation.

While Russia’s Policy in Africa may very well have produced certain results, there is no discernible strategy behind it

After all, nothing contributes more to the achievement of mutual understanding than personal communication and awareness