In the 2016/2017 academic year, the number of foreign students studying in the United States surpassed one million for the first time ever, and stands at 1,044,000 (a 7 per cent increase from the previous year).

As of today, around 5% of all students in the United States come from abroad. Unsurprisingly, the majority of these students are from China and India, with Saudi Arabia coming in third, moving ahead of South Korea in the list of leading providers of students to the United States.

Foreign students bring in $38 billion dollars to the U.S. economy every year.

Despite the widespread belief that the Russian education system is in the midst of a crisis, foreigners also account for around 5 per cent of the country’s student population. The total number of foreign students studying in Russia as of the 2015/2016 academic year is 237,537. Most foreign students come from former Soviet countries, namely, Kazakhstan, Uzbekistan, Ukraine, Turkmenistan and Belarus. As for non-CIS countries, China is by far the biggest provider of foreign students to Russian universities, outstripping other East Asian, Middle Eastern and North African countries. Only 31 per cent of foreign students in Russia receive some kind of scholarship or state aid; the remaining 69 per cent are full fee-payers.

Statistics suggest that there is still a demand for Russian education in a number of fields (healthcare and medicine, economics and management, and the humanities) and that it has great export potential. 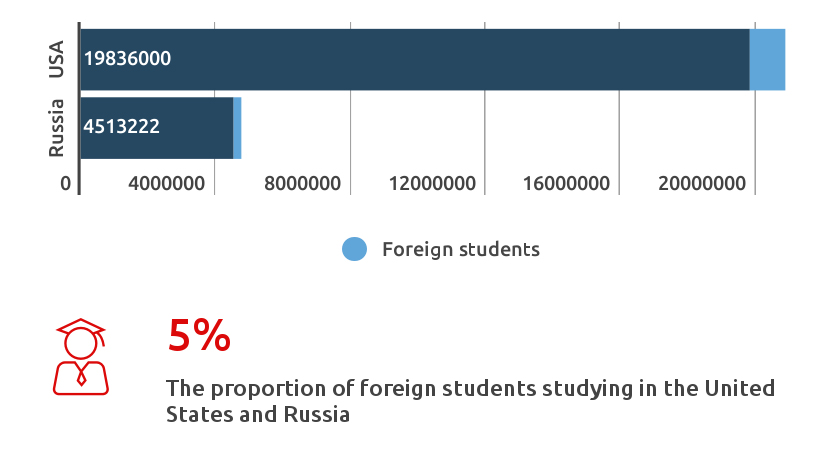 Rate this article
Share this article
FOLLOW THE LATEST DEVELOPMENTS
Reader's choice
HideShow
Coronavirus: A New Bug or Feature of World Politics?
Five Reasons Why It’s Time to #RecognizeСrimea
Why the Justice Department Dropped Charges Over “Russian Interference”
The Thucydides’ Trap: the Avoidable Destiny Between the US and China
Addressing Unresolved Challenges in U.S.-Russia Relations