As the current Spanish government has no stable majority in parliament, it has but rely on the Catalan and Basque parties to pursue its agenda. Today, the two autonomies enjoy a higher leverage in their negotiations with Madrid. This has seemingly intensified talks on the long-standing crisis of Spain’s autonomies. However, while the Basque Country seems to be satisfied with a gradual growth of its competencies, Catalonia has never put aside its willingness to hold a new referendum. The article compares the recent concessions Madrid made to the two autonomies and explains them.

P. Sanchez’s excessive flexibility in negotiations with Catalonia and the Basque Country may lead to a higher popularity of the right-wing VOX party. Those among voters, who are dissatisfied with the policy of offering concessions to nationalists, may switch to the forces that safeguard the Spanish constitutional order. Another problem for the PSOE-Podemos government is the socio-economic recovery of Spain from COVID-19.

Little progress in these two directions is likely to result in the loss of public support. The influence of Catalonia and the Basque Country will not see a decline in the coming years. It is therefore essential for Madrid to make new concessions similar to those made to the Basque Country. But they should be gradual to provoke less publicity.

The November 2019 general parliamentary elections in Spain resulted in none of the parties getting an absolute majority needed to form a government. Following two months of negotiations, a left-wing coalition between the PSOE (Spanish Socialist Worker’s Party) and Unidas Podemos (United We Can) was formed in January 2020. Having received the necessary parliamentary support, Pedro Sanchez, the leader of the socialists, assumed the post of the Spanish Prime Minister.

Catalan and Basque parties are now vital for the Spanish government

Since this is the first coalition government in the history of modern Spain that does not rely on a stable parliamentary majority, the role of regional parties has significantly increased. The PSOE-Podemos coalition only has 155 mandates, falling short of the majority (176) by 21 votes. In such a situation, success of any initiative put forward by the left-wing government depends on the support of other parliamentary parties—in particular, the nationalist movements of Catalonia and the Basque Country. The Republican Left of Catalonia (Esquerra Republicana de Catalunya, the ERC) and “Together for Catalonia” account for 13 and 8 seats, whereas the Basque Nationalist Party (BNP) and the EH-Bildu are each represented by 6 and 5 MPs.

Support of the four regional parties facilitated a number of crucial events in the Spanish political process. These include Pedro Sanchez, the PSOE leader, taking the office of Prime Minister in January 2020, a repeated extension of the state of emergency in the country in spring 2020, the adoption of the state budget for 2021 as well as passing the bill on the distribution of money from the EU recovery fund into law.

In this regard, both Catalonia and the Basque Country are now presented with more opportunities to promote their interests in broadening autonomous powers in exchange for their support of the governmental projects. At times of the bipartisan system, when the party to win general elections could independently form a majority government, regional forces had weaker bargaining positions. However, the value of their votes in the Congress of Deputies today has increased drastically. Amid such conditions, P. Sanchez has no other way but intensify interaction with the two autonomies on the issues of interest to them. He is driven by the desire to sustain support of the regional forces, ensuring the viability of his government.

Different aims: Catalonia is seeking referendum while the Basque Country is keen to broaden its autonomy 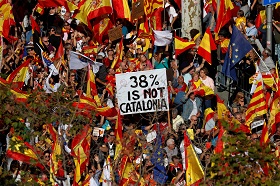 The coronavirus pandemic, which broke out in 2020, did not allow to launch another stage of negotiations between the Spanish government and the political leadership of Catalonia and the Basque Country. Notably, each autonomy has its own strategy and aims to pursue in their negotiations with Madrid.

The negotiations agenda of the new Catalan government, formed by the ERC and “Together for Catalonia” following the regional elections on February 14, 2021, includes: 1) amnesty for all the prisoners detained after the illegal referendum on October 1, 2017; 2) agreement with the government on holding another, this time official, referendum on the status of the autonomy; 3) revision of the current structure of financial inflows in favor of increasing investments from Madrid in the budget of the autonomy.

At the same time, the Basque government, headed by the BNP, has a different set of objectives: 1) implementation of all the remaining provisions enshrined in the Statute of Autonomy of the region, namely the transfer of some 30 competencies in self-governance to the regional authorities; 2) resuming talks on a new Statute of Autonomy; 3) formation of a broad negotiating platform involving the largest Spanish and Basque political forces.

In 2021, negotiations on these issues were intensified between Madrid and the regions. Each autonomy has managed to achieve certain results in pursuing their interests.

Catalonia: two tactical victories with no prospects for a referendum

Both Catalonia and the Basque Country managed to get a number of significant concessions in the course of June to October 2021. By doing it, P. Sanchez has shown the importance of the two autonomies in maintaining stability in the PSOE-Podemos coalition government.

Catalonia succeeded in achieving two important outcomes. The first victory was a judicial one. On June 23, 2021, amnesty was granted to all 12 prisoners sentenced to terms from 9 to 13 years on the charges related to the illegal referendum on the status of the autonomy that was held on October 1, 2017. This step sparked a severe backlash in the Kingdom, with demonstrations held in many regions. The majority of Spaniards (61%) expressed disagreement with such a move. However, it manifests that P. Sanchez is ready to make controversial compromises to maintain his political allies, despite possible long-term losses of the electorate support.

The second success of Catalonia was in the political domain. Due to a flexibility of the central government, the first talks in a year and a half that took place between Prime Minister Pedro Sanchez and Pere Aragones, the head of the Catalan government, became possible. While the sides only exchanged views on topical bilateral issues at their first face-to-face meeting on June 27, 2021, the parties could hold a substantive discussion of a plan to normalize interaction during the second round on September 15.

In the meantime, it was the Catalan side that set the agenda. This emphasizes the increasing role of the autonomy in bilateral relations, while indicating that Madrid is keen to garner support among the Catalan deputies. This is the why the central government is ready to offer some concessions.

Following the talks, the Prime Minister stated that the sides managed to agree on 44 out of 45 points of the document presented by P. Aragones. However, the only stumbling block remaining is a new referendum in Catalonia. On this issue, P. Sanchez is not going to make any concessions.

The Basque Country: higher flexibility and new competencies for the autonomy

Madrid has also stepped up negotiations with the Basque Country. However, it should be added here that the region has managed to achieve more tangible results in terms of expanding its autonomous powers in judicial and financial matters.

First, as the agreement signed in April 2021 suggests, three penitentiary centers with 1,378 prisoners were handed over to the Basque Government from October 1, namely the Department for Equality, Justice and Social Policy.

Second, the talks on July 28 between Pedro Sanchez, Spanish Prime Minister, and Inigo Urkullo, head of the Basque government, within the framework of the Joint Economic Commission resulted in new tax competencies handed over to the Basque Country. Local authorities are now in charge of collecting taxes from e-commerce, financial transactions and digital services. This may lead to an inflow of additional 220 ml euros to the Basque budget.

In response to such steps of the Spanish government, I. Urkullo made an eleventh-hour decision to attend the Conference of regional leaders on July 29, 2021. This event is of political importance as it unites the heads of all Spain’s 17 autonomies. At the same time, the Catalan Pere Aragones did not participate in the meeting. Had both Catalonia and the Basque Country been absent, this would have come as a real blow to P. Sanchez. Therefore, it was of utmost importance for the Prime Minister to persuade at least the Basque leader to attend the meeting. Urkullo’s presence partly contributed to the image of Sanchez as a politician who can reach agreement with the regions.

In Catalonia, the coalition government is dominated by the ERC, which is more moderate and ready to move away from harsh rhetoric in favor of discussing common problems with Madrid. At the same time, its partner, “Together for Catalonia” that lost the February 2021 regional elections to ERC by only a narrow margin, stands for more straightforward actions.

Such a configuration within the coalition restricts Catalonia’s flexibility. The main goal of the radical wing is a new referendum. The ERC’s moderate approach is counterbalanced by “Together for Catalonia”. It does not support excessive rapprochement with Madrid or any deviation from that idea.

At the same time, the situation is different in the Basque Country. The moderate BNP enjoys leading positions in the government coalition while the EH-Bildu has a much lower weight in strategy setting. It allows the autonomy to be flexible, interacting with Madrid in a more successful manner.

Moreover, the talks between Catalonia and Madrid are still held in a narrow format of face-to-face meetings between the Prime Minister of Spain and the head of the autonomy. At the same time, the Basque Country has already resumed dialogue within the Joint Economic Commission. This is a more inclusive format that enables the sides to cover a wider range of topics.

Currently, the Basque Country’s give-and-take strategy results in smaller but more meaningful concessions, bringing about a broadening of its autonomous powers in exchange for political support of the central government. Meanwhile, Catalonia’s attempts to achieve more significant results, which may affect the image of P. Sanchez, bump up against Madrid’s reluctance to cross the red line. The Prime Minister is ready to make some tactical concessions to the autonomies in order to garner political support for his initiatives. Despite certain criticism from the right wing, such steps confirm the effectiveness of the PSOE-Podemos coalition, demonstrating the viability of the incumbent government to the electorate.

The future of the negotiations between the center and the autonomies heavily depends on the 2023 Spanish general elections. Right-wing parties like the People’s Party, VOX and “Citizens” are not inclined to broad negotiations with Catalan and Basque nationalists. If these parties form the next government just in two years, the entire process of normalizing relations with the regions may be put on hold.

P. Sanchez’s excessive flexibility in negotiations with Catalonia and the Basque Country may lead to a higher popularity of the right-wing VOX party. Those among voters, who are dissatisfied with the policy of offering concessions to nationalists, may switch to the forces that safeguard the Spanish constitutional order. Another problem for the PSOE-Podemos government is the socio-economic recovery of Spain from COVID-19.

Little progress in these two directions is likely to result in the loss of public support. The influence of Catalonia and the Basque Country will not see a decline in the coming years. It is therefore essential for Madrid to make new concessions similar to those made to the Basque Country. But they should be gradual to provoke less publicity.