Not only will US voters in 2016 risk having to choose between two political dynasties – a Clinton VS a Bush. They will also likely see again many well-known decision-makers who have already worked with the Clintons and Bush over the last decades. Millions of US citizens, however, are highly disaffected with this state of affairs and might go for a jolly. In this sense, eccentric Donald Trump is the man. But who are the main candidates and what do they propose? In particular, what are their ideas (and related teams) on foreign affairs?

Is Hillary Clinton the ‘woman for all seasons’, the ‘Highlander’ of American politics? After eight years as ‘first lady’ (1992-2000), eight in the Senate (2000-2008), and four as Secretary of State (2009-2013), Hillary is back and seems bound to win the Democratic nomination almost without opposition. Will that really happen? Mrs Clinton is often perceived as ‘too left-wing’ on the right, and too ‘right-wing’ on the left, as the recent exploits (in the polls) of her Vermont opponent, Bernie Sanders, demonstrate. In addition, potential scandals are always behind the corner: there is still an open controversy on Hillary’s use of her private email, which has been handed to the Department of Justice. Doubts also exist on the transparency of some activities and donations of the Clinton Foundation. Clinton’s campaign, despite some new faces, is in the hands of the experienced, John Podesta, former Chief of Staff of Clinton and Obama, and of course in the ‘deep pockets’ of the usual big donors (among whom, Buffett’s name stands out; can we really be sure the enigmatic ‘wizard of Omaha’ will keep supporting her?). There are new faces; for example, in the foreign policy team Hillary relies on Jake Sullivan, 38 years old, a former aide of both Obama and herself. But how influential can he be? 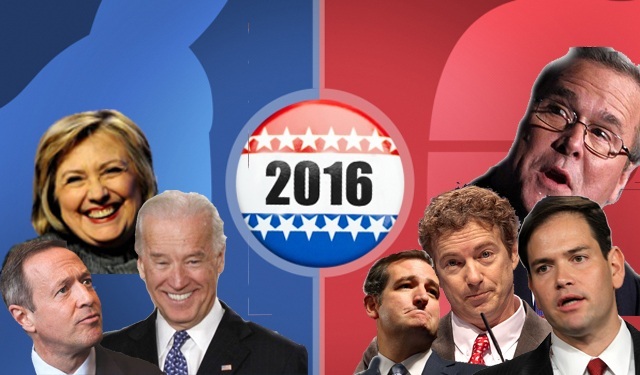 Even leaving aside doubts on the novelty of Hillary’s team and ideas, further doubts are aroused by her record in politics, and especially on foreign affairs. She was Secretary of State during the Arab Spring, when the USA committed tremendous mistakes; countries such as Libya, Egypt, and Syria were not ready for democratic transitions, as what followed to the unrest has demonstrated. How far can Hillary be held responsible for those developments? How would she act in relation to Russia, China, and other emerging powers, which have recently been at odds with some US policies?

In the Republican camp, the dynast under scrutiny is Jeb ‘Back to the Future’ Bush. Is he the ‘right’ Bush? He is supposed to be more moderate and diplomatic than his brother, which after all would not be much difficult. Yet his team strongly draws on his father’s and brother’s. 19 out of his 21 foreign policy advisers were already in their administrations (see http://www.washingtonpost.com/news/the-fix/wp/2015/02/18/jeb-bushs-foreign-policy-team-is-eerily-familiar-in-1-venn-diagram/). Some names are not really re-assuring; one is Paul Wolfowitz, perhaps the most hawkish ideologue of the Iraq war. Paula Dobriansky, who worked closely with George W. Bush, has a questionable sympathy for ‘coloured revolutions’. Michael Hayden was CIA Director under the same president. Are these guys up for a new age of robust ‘democracy promotion’ and neo conservatism?

Other interesting Republican candidates are Marco Rubio and Ted Cruz, both young, from Southern states, and of Latino origins. The latter has recently rallied crowds in Washington against the Iran deal, and on the occasion met and ‘befriended’ the most discussed of his Republican opponents, Donald Trump.

Donald Trump is of course a one man show. His early exploit in polls should not come as a surprise. Trump reaches to America’s deep guts, its will to fight back, to be great again after international disasters (Iraq, above all), financial crises, and relative economic decline vis-à-vis China and other emerging powers. Yet Trump is not just a populist. By playing at the forefront, he raises many difficult issues and tests the public opinion. He might pave the way for other candidates, or for himself, or maybe a combination of their forces. This does not mean that Cruz will take over from him, as some speculates (see http://www.bbc.co.uk/news/world-us-canada-34202856). However, his role gives him the possibility to become the arbiter of the election. Only Trump can openly talk about bombing ISIS or adopting protectionist policies, especially towards China. Only Trump can evoke the ghost of the USA becoming Number 2 in the world, after China, and abandoning the Middle East. The way the other candidates react will decide the elections. ‘Institutional’ candidates like Jeb Bush cannot be that outspoken. Trump’s exploits, cast a light on how American politics is prisoner of a tiny elite of powerful families and their influential donors. The average US citizen has enough of them and is even ready to vote for an outsider billionaire who better interprets everyday gut feelings.

The overall impression is that the USA is fighting back. After years of isolation, retreat, and blunders (notably, the Arab Spring), there is a renewed intention to be protagonist. Is this an effect of the Iran deal? Has that significant achievement injected new self-confidence? Time will tell if a new spirit (and which type thereof) has caught USA political dynasties and the voters at large, and not only Mr Trump’s verbal performances.