Suddenly, sickeningly, the consequences of climate change have hit gentle, populated South-Eastern Australia. All up and down the usually well-watered Great Dividing Range, from Western Victoria around to the Queensland tablelands behind Brisbane, the Australian bush is on fire. An area now the size of Portugal, or Czech Republic, or Austria, has burnt out in fierce fast moving fire infernoes. Our koala population is now virtually extinct.

Suddenly, sickeningly, the consequences of climate change have hit gentle, populated South-Eastern Australia. All up and down the usually well-watered Great Dividing Range, from Western Victoria around to the Queensland tablelands behind Brisbane, the Australian bush is on fire. An area now the size of Portugal, or Czech Republic, or Austria, has burnt out in fierce fast moving fire infernoes. Our koala population is now virtually extinct.

But it is not just the bush, the nature reserves, the national parks, that have sickeningly been burnt out. It is the small rural communities, the places people have retired to from our overcrowded cities, people wanting to make:

“ ... A home among the gumtrees, with lots of plum trees,

A sheep or two, a kangaroo,

A clothesline out the back

Verandah out the front

And an old rocking chair.

You can see me in the kitchen

Cooking up a roast

Or Vegemite on toast

Just you and me, a cup of tea

And later on, we'll settle down

And go out on the porch

And watch the possums play.”

Thanks to #JohnWilliamson for his much loved folk song “Home Among the Gum Trees”, can be heard on Youtube.

These are the sorts of small-acreage rural communities, small farms and orchards and vineyards and villages, that have taken the worst hits this past week. These places, and the little coastal resorts, full of thousands of ordinary families enjoying traditional family summer holidays in cottages at the seaside. The terror of the fires in familiar safe places like Lakes Entrance, Batemans Bay, Shoalhaven, Bermagui, Bega, Mallacoota. 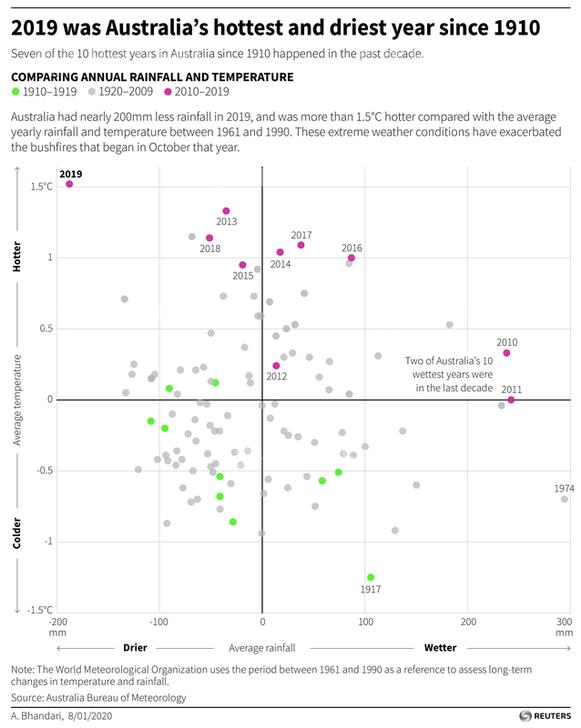 Words cannot describe this awfulness. People standing in water on smoke-filled beaches under a black sky as their houses and caravans burn to the ground nearby, the fires leaping from treetops to treetops and hence to porch pergolas and into houses, within seconds. By now, well over 1600 loved houses — homes and family holiday retreats — have burned up and down the coast and adjacent ranges and valleys. Already 26 people are known to have died in these fires, trying to defend their property or neighbours. It is simply terrible.

Meanwhile, last night, New Years Eve, the Sydney Big Money and foreign visitors celebrated the day with a shameless massive fireworks display around Sydney Harbour. We were told it was too late to cancel, too many tourist dollars were at stake, it had to go ahead for economic reasons.

But actually, it was the Sydney moneyed elite saying “That’s fine. It can wait” to the rest of the country: “we will continue to have fun, as we always do”.

It is not just the Murray-Darling River Basin regional communities that such elites are destroying with their greedy mass irrigation schemes. Now the little people, the “quiet Australians”, living or spending traditional summer holidays in villages up and down the coast just a few hours drive from Sydney, have been cruelly kicked in the guts too. These places won’t recover easily, or maybe at all.

Australian PM Morrison has talked for months emptily on TV set piece ads about the Australian spirit of courage and resilience. He knows nothing of either, he is no more than a mouthpiece for big money and coal. Only today — weeks after the emergency began — did he reluctantly approve the use of national defence assets to help fire victims. He won’t yet face a press conference. He is discredited in the eyes of the public, and he knows it.

The fires of climate change are upon us. Our beautiful bush will never be the same again. Don’t say we were not warned.

And we are only halfway through the summer fire season. There are undoubtedly more big fires to come before the Autumn rains.

Postscript: in the week since I wrote this essay, the Prime Minister has been busy re-inventing his past positions. Having starved the firefighting community of resources over the past year, even refusing in September to meet retired fire chiefs who were urging sharply increased government spending on firefighting trucks and aircraft, he now has abruptly pledged an extra $2bln federal money to rebuild after the bushfires. Foreign partners — US, Canada, New Zealand — have sent experienced firefighting crews to help. Small Pacific neighbours Fiji and Vanuatu have offered disaster relief aid.

Real policy changes on climate change may at last be forced on Mr Morrison and his minerals and energy industry backers by the sheer weight of public outrage. Hopefully this might become a turning point in Australian climate change policy: but the forces of reaction remain strong.