Sergei Kislyak on Russia-U.S. Relations: It takes Two to Tango

On November 16, 2017, the Russian International Affairs Council (RIAC) held a meeting on “Russia–China Relations in the Context of the 19th Congress of the Communist Party of China.” The event was attended by Ambassador Extraordinary and Plenipotentiary to Russia Li Hui, President of the Russian International Affairs Council Igor Ivanov and a number of RIAC members. Sergei Kislyak, Member of the Council of the Federation, former Ambassador Extraordinary and Plenipotentiary of the Russian Federation to the United States (2009–2017) and RIAC member, takes stock of 2017 and shares his take on U.S.–Russia relations.

On November 16, 2017, the Russian International Affairs Council (RIAC) held a meeting on “Russia–China Relations in the Context of the 19th Congress of the Communist Party of China.” The event was attended by Ambassador Extraordinary and Plenipotentiary to Russia Li Hui, President of the Russian International Affairs Council Igor Ivanov and a number of RIAC members. Sergei Kislyak, Member of the Council of the Federation, former Ambassador Extraordinary and Plenipotentiary of the Russian Federation to the United States (2009–2017) and RIAC member, takes stock of 2017 and shares his take on U.S.–Russia relations. 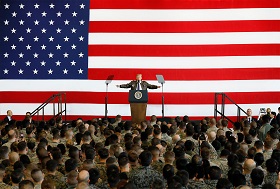 Igor Ivanov:
One Year after the U.S. Presidential Elections

2017 was a year of intense work. I don’t think there was a particular event or event that radically changed the tasks facing our country. These tasks are developing constantly, and they are not getting any easier. I think the key thing is that Russia has proven to itself that it is able and willing, when necessary, to firmly defend its fundamental interests while at the same time respecting other countries. I think that the successful operation carried out by the Russian Aerospace Forces in support of the efforts to combat Islamic State in Syria is the most vivid example of how Russia operates in modern conditions. Russia acts decisively, effectively and correctly, and respects international law. In international affairs, Russia has demonstrated that it can defend its interests, as well as the interests of international stability in the fight against terrorism – which is a great menace to Russia and many other countries. Throughout year, we have demonstrated that, despite all the difficulties and the malicious moves carried out against our country, including the sanctions, we are able to maintain a rational approach to international relations and protect our interests. And we have not shut the door to restoring normal relations with the United States and other countries. I think this approach will create new opportunities for our work in international affairs.

Having attended the RIAC event in honour of this major event in Chinese political life, it is hard to overestimate the quality of the relations that we have developed with our Chinese friends, and not only this year. The Chinese Ambassador has continually stressed the special nature of Russia–China relations, which are based on strategic cooperation. Russia–China relations are an important factor in international affairs. These relations are developed through serious work on the basis of mutual respect between the countries, respect for international law, and the recognition of their responsibilities as permanent members of the UN Security Council in matters pertaining to international security and stability. This is a crucial area that has, in my opinion, gained greater depth and stability in 2017, and I hope that they will not be undone.

What steps could be taken to help find a way out the current impasse in U.S.–Russia relations? 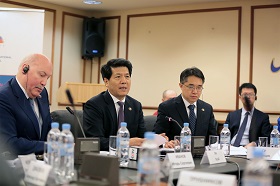 Despite all the twists and turns in our relations with the United States, we have always kept the door open for normalcy to be restored in the relationship. It has to be said, however, that we are not the ones destroying U.S.–Russia relations – this is the handiwork of our American friends. At the present moment, this could to a large extent be put down to political infighting inside the United States, where relations between Russia and the United States have become a bargaining chip, if not an instrument in the domestic political struggle. It would seem that this period of domestic squabbling will not end any time soon. This does not mean that we should stand with our hand outstretched, but we should always be open for cooperation. Despite all the difficulties, we should work together in those areas where the interests of the two states coincide. However, we should be prepared for this difficult period to continue. I would not be particularly concerned about the situation in Russia, because we are a self-sufficient state; we are quite capable of developing without positive dynamics and without a real partnership with the United States – although this would, of course, be the best option for the development of relations between the two countries. But, as the Americans like to say, “It takes two to tango.” I think relations will be restored in due course.

Do you subscribe to the opinion that we have cyclical relations?

No, I would not say that U.S.–Russia relations are cyclical, but we do experience complicated periods from time to time. Strictly speaking, U.S.–Russia relations have never been simple, but the degree of their complexity varies depending on the situation. Today, everything is exacerbated by the major domestic political crisis unfolding in the United States. But this is the reality, and whether we like it or not, the United States lives in its own political shell. And that’s perfectly fine. Meanwhile, we will continue to live as a normal healthy state, working with our friends – China, for example. We have many friends. I look at the general political situation now and I am reminded of the situation of a few years ago, when Russia was being threatened with isolation. Who is more isolated at international forums now – Russian leaders or U.S. leaders? It is a big question. I have the utmost confidence in the capabilities of the Russian leadership, and the capabilities of our entire country. We endure difficulties with a sense of calm. As a nation, we have gone through much harder times. I think all the plans we have for building domestic economy will be put into practice. Ultimately, the most important thing is to develop our country and improve the quality of life of its citizens, ensuring their security and, where possible, the security of our friends.

Rate this article
Share this article
FOLLOW THE LATEST DEVELOPMENTS
Project
Russia and the US: Problems in Bilateral Relations, Regional and Global Challenges
Related materials
One Year after the U.S. Presidential Elections

The way out of the current crisis in Russia–U.S. relations is not feasible in the short-term perspective.

On November 16, 2017, RIAC hosted a Club Meeting «Russia-China Relations in the Context of the Results of the 19th National Congress of the Communist Party of China». Li Hui, Ambassador Extraordinary and Plenipotentiary of China to Russia, made a keynote speech within the framework of the event.

Tags
Russia, USA, China
Reader's choice
HideShow
Searching for a New World
Twelve Steps Toward Greater Security in Ukraine and the Euro-Atlantic Region
Russia–India Relations: Successes and Prospects
A Plea to Save the Last Nuclear Arms Treaty
The SWIFT System: A Focus on the U.S.–Russia Financial Confrontation