Not Just for Christmas

After a year of escalation, the ‘Christmas truce’ offers the possibility for a political breakthrough in the Korean peninsula. The extent of engagement between the Democratic People’s Republic of Korea, the Republic of Korea and the United States is both long-delayed. But in the earnest desire for peace, the parties must not be lured into an agreement which compromises non-proliferation. Russia must assist in steering this process. As a nuclear-weapons state and permanent member of the United Nations Security Council, its core interests and role as a guarantor of the international system compels it to address the risks of proliferation. This threaten will not lessen throughout the negotiation process, or even necessarily after the achievement of a political settlement.

There are two options on the table: ‘denuclearization’, and ‘dual freeze’. The former is ideal, but unlikely to be realised due to its questionable sincerity. The second will require significant commitments that may be intolerable to both parties. Regardless, North Korea must return to the fold of the Treaty on Nuclear Non-Proliferation and accept the supervision of the International Atomic Energy Agency prior to any agreement. Inspection and verification is integral to the ‘dual freeze’ proposal and conducive to reducing regional tensions and facilitating negotiations. The sanctions regime must also be maintained, and gaps in its enforcement addressed, in order to manage proliferation risks. If a final political settlement allows North Korea to maintain its nuclear capabilities, then the regime must remain in place for the foreseeable future to monitor and interdict proliferation streams.

It was the most miraculous Christmas truce since the First World War. After a year in which the prospect of conflict on the Korean peninsula never appeared greater, the Democratic People’s Republic of Korea offered an unexpected olive branch to the Republic of Korea. Supreme Leader Kim Jong-un hinted at rapprochement in his New Year address; eight days later, his envoy met with interlocutors from South Korean President Moon Jae-in in the demilitarized zone for the first face-to-face meetings between North and South since 2015. The parallels to 1914 were cemented when, a month later, both sides fielded a joint-team at the PyeongChang Winter Olympics (playing ice hockey, rather than football). But the biggest breakthrough came in early March with the announcement of a potential meeting between US President Donald Trump and Mr Kim, an unprecedented summit between the leaders of belligerent states. 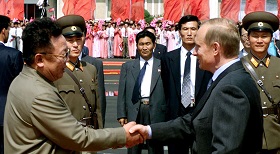 Much scepticism remains about the realisation of a political settlement; there have been previous ‘false dawns’ before in 2012, 2005 and 1994. But far greater is the risk that the relatively untested presidents of South Korea and the United States, eager for an easy victory to burgeon their prestige, might plunge into a weak agreement. The mere willingness of President Trump to consent a summit — a mark of recognition that North Korea has been craving for decades — already suggests an absence of caution. It is crucial that other parties, such as Russia, remain involved in the process — for there can be no peace on the Korean peninsula without resolving the issue of non-proliferation.

There are special reasons for Russia to be concerned by the Korean crisis. Its stake in global governance rests primarily on two assets: its permanent seat on the United Nations Security Council, and its status as a nuclear power. A nuclear North Korea threatens to diminish both. First, the Kim regime has been openly defiant of the UN for years. A series of ever-more-stringent sanctions has not prevented it from developing its nuclear weapons and ballistic missile programmes. It is estimated to already possess 10-20 warheads and will probably have an operative delivery system by the end of the decade. Its success has damaged the credibility of the Security Council and its ability to uphold international law.

The nuclear weapon states have been likened to a club — and like any club, any expansion in membership results in a dilution in prestige. Of course, the Russian arsenal vastly exceeds that of North Korea in quality and quantity. But the mere fact of possession relatively reduces Russia’s own unique status. That North Korea was able to bypass the non-proliferation architecture — of which Russia is a joint-guarantor — and present its achievement as a fait accompli is all the more serious. True, North Korea is far from the first: India, Israel, Pakistan and South Africa have all, at one point, muscled their way into the nuclear club. But whereas those states treated their weapons with the gravity which they deserved (or later abolished them), North Korea has made nuclear weapons central to its national identity and casually threatened their use against its neighbours. 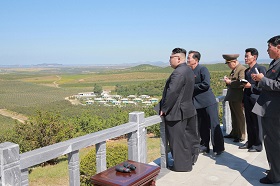 Andrey Kortunov:
Pyongyang is Starts and Wins. What Can the Losers Do?

North Korea’s disregard for international rules and growing nuclear stockpile are a lethal combination. Having obtained the nuclear trump card, it might seem unlikely for North Korea to pass out the deck. But the regime is desperate for hard cash. It has proved more than willing to exploit revenue from illicit arms trafficking, including ballistic missile technology. Moreover, it has displayed a cavalier attitude to weapons of mass destruction. Only last year, it was alleged to have assassinated Mr Kim’s brother by deploying VX nerve gas in a busy airport terminal in Malaysia. The use of such a potent and prohibited agent was not necessary for the killing; it was either an act of impunity or indifference to international opinion. Nuclear technology is no more sacred; the International Atomic Energy Agency has previously noted the similarities between North Korea’s Yongbyon facility and a probable nuclear reactor built in Syria prior to 2007. More recently, the UNSC’s Panel of Experts reported this month on clandestine “arms shipments and cooperation” between both countries, including “the transfer of items with utility in ballistic missile and chemical weapons programmes.” Given North Korea’s long history of rule-breaking and opaque exports, the possibility of proliferation is too strong to ignore.

The ideal solution to this risk would be total unilateral denuclearisation. The North itself has appeared to put this option on the table by passing it on to the United States via South Korean National Security Adviser Chung Eui-yong. But the sincerity of this proposal is doubtful, not least because no such possibility has been aired in North Korea’s state media. Of the eight non-Soviet states which have ever possessed independent nuclear weapons, only one (South Africa) has ever voluntarily relinquished them. It is unlikely that, having suffered so much yet progressed so significantly in its ambitions, the Kim regime is prepared to surrender its ultimate deterrent without external pressure.

The second is the ‘dual freeze’ proposal advanced by China and Russia for a proportionate de-escalation of nuclear and missile testing by the North and defence exercises by the South. Yet while this might offer a space for dialogue, it is not yet a platform for peace and non-proliferation. For one thing, there is as yet no means of verifying the compliance of both parties; North Korea must simply be taken at its word that it is not still developing its weapons programmes. For another, de-escalation in the long-term involves demands that are simply unacceptable to the other party. For the North, that is nuclear disarmament; for the South, the withdrawal of US forces from the peninsula, Japan or even the entire Asia-Pacific region. While these seemingly irreconcilable positions are under discussion, the risk of proliferation remains active. 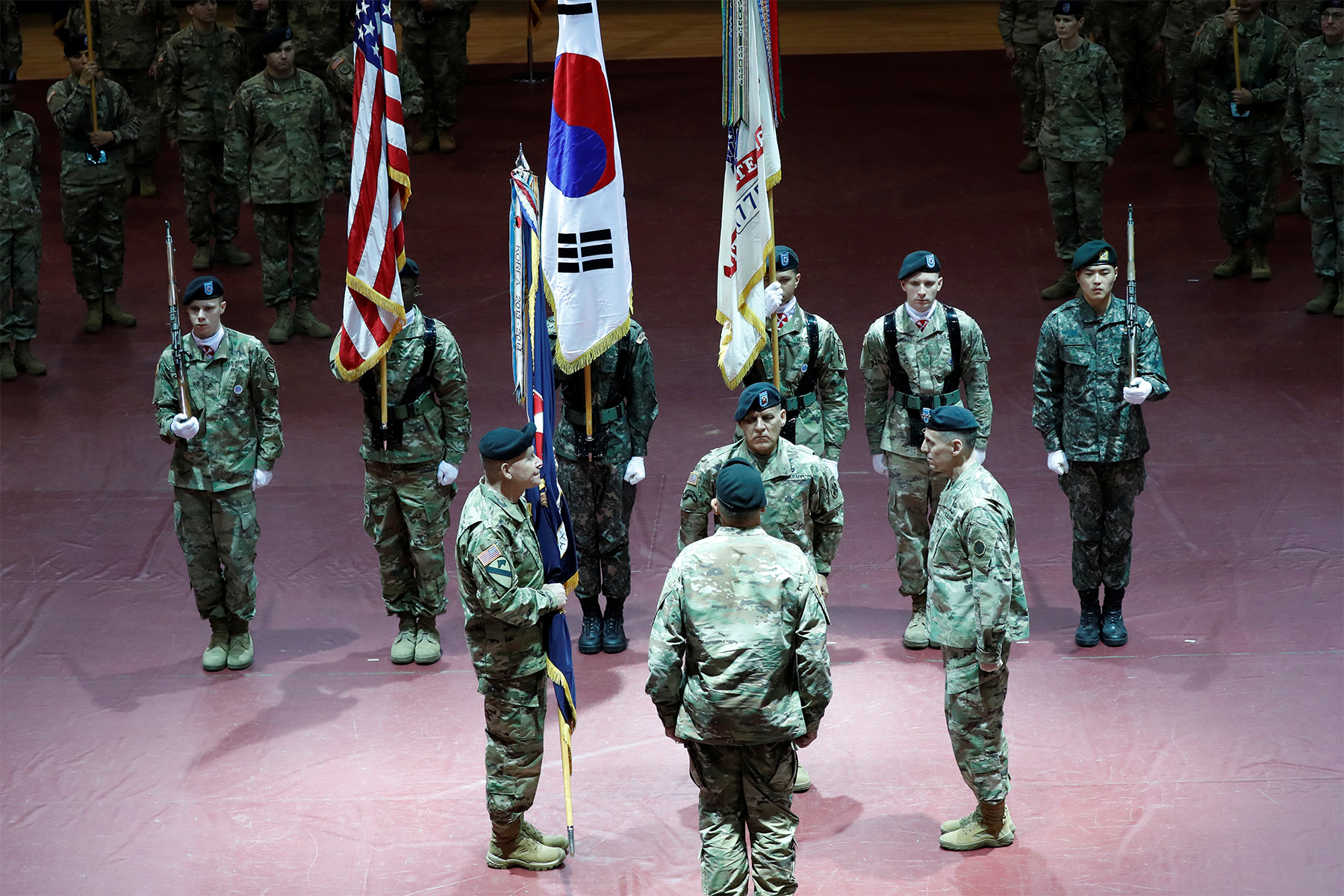 As such, the proliferation question must not be left as an appendix to an eventual political settlement, but actively addressed even as negotiations remain ongoing. First, North Korea should return to the Treaty on Nuclear Non-Proliferation and the supervision of the IAEA. It has been over a decade since inspectors last visited the country; the ambiguity of its capabilities has increased regional tensions almost as much as its highly-visible testing. A resumption of NPT compliance would demonstrate the credibility of North Korea’s ‘denuclearization’ offer, enable the verification and monitoring of its programme and bolster the political process. Such transparency is essential to the success of the ‘dual freeze’ proposal.

Second, as well as maintaining the sanctions regime until progress has been made on the nuclear-weapons dimension, the Security Council must close the gaps in enforcement. That North Korea has been able survive despite being subject to evolving sanctions since 2006 is partially attributable to the failures of implementation. Markets for arms transfers remain open to the North in Asia, Africa and Latin America; the interdiction of illicit cargo remains weak in practice. This regime will continue to be significant even if peace prevails. If a final settlement allows North Korea to retain its nuclear capabilities, then it is imperative that the international community continues to monitor and interdict proliferation streams. Otherwise, the Korean peninsula might become the nexus for global nuclear proliferation.

In hindsight, the truce of 1914 was not the beginning of the end, but the end of the beginning. Likewise, the truce of 2018 is only the first stage in a prolonged, multi-part process. Peace and non-proliferation are symbiotic and mutually strengthen each other, but the risk remains that parties will opt for the former at the expense of the latter. For the sake of its own interests as well as international security, Russia must assist in this process. Successful management of the Korean crisis would vindicate its demands to be treated seriously by the United States as a global partner. It would burnish its credentials as a mediator, galvanising other conflict-resolution processes in Syria and Ukraine. Conversely, if North Korea maintains its nuclear capability and ability to proliferate abroad without oversight or restriction, Russia’s chief assets — its UN seat and nuclear stockpile — will become badges of redundancy rather than responsibility.

Rate this article
Share this article
FOLLOW THE LATEST DEVELOPMENTS
Related materials
Pyongyang is Starts and Wins. What Can the Losers Do?

The Dialogue with the North Korean Leadership Now Has to be Conducted from a Position of Weakness, Rather than one of Strength

Korea after the Olympics: Temporary Truce or Permanent Peace?

Tags
DPRK, North Korea, Republic of Korea, South Korea, Korean crisis, Korean Peninsula, Non-proliferation
Reader's choice
HideShow
India Is Irreplaceable Balancing Force in Global Systemic Transition
Closing Loopholes: Outlining the U.S. and EU Sanctions Policy Onward
Slim Chance for US to be Successful in Summit of Americas
Lessons of Ukraine and the Death of Leadership: Only History Exists
Towards Dual-Tripolarity: An Indian Grand Strategy for the Age of Complexity