Ukraine between West and East

Since the end of the Cold War and disintegration of the Soviet Union, the almost two-year-long Ukraine crisis has grown into a key event affecting global security and international relations. In fact, the situation has been analyzed at length both by Russian and Western experts, although much of the work has been deplorably biased and lopsided. To this end, the analysis offered by RIAC in its 2015 paper “The Ukrainian Challenge for Russia” definitely stands out because of its sense of balance and impartiality.

Since the end of the Cold War and disintegration of the Soviet Union, the almost two-year-long Ukraine crisis has grown into a key event affecting global security and international relations. In fact, the situation has been analyzed at length both by Russian and Western experts, although much of the work has been deplorably biased and lopsided.

To this end, the analysis offered by RIAC in its 2015 paper “The Ukrainian Challenge for Russia” definitely stands out because of its sense of balance and impartiality. The authors chose to take on only the rational components of policies employed by the involved parties, shedding emotions and preconceptions.

“The Ukrainian Challenge for Russia” is a most profound work covering various aspects of the Ukraine conundrum, including providing forecasts.

However, let me focus on several issues touched upon in the paper for more detailed examination. Among other things, one issue relates to the most likely scenario of a frozen conflict that could bring Russia an assortment of benefits and risks, as well as another connected to the challenges emerging for Ukraine in addition to those mentioned in RIAC’s paper.

The freezing of the East Ukraine conflict will very likely prevent Kiev’s accession to or at least in the near future.

The convoluted situation in East Ukraine and Russia sanctions notwithstanding, certain benefits for Moscow seem to be possible. The freezing of the East Ukraine conflict will very likely prevent Kiev’s accession to NATO or European Union at least in the near future, because neither organization will admit states that have unsettled territorial disputes or, moreover, are engaged in armed confrontations. Besides, having lost the strategically significant Crimea, Ukraine has lost some of its attractiveness for the West, while Russia has bolstered its stance in the Black Sea and improved its capacity for force projection in the East Mediterranean. As for the third-party countries, now they will face many more problems related to deployment in the northern and central waters of the Black Sea. 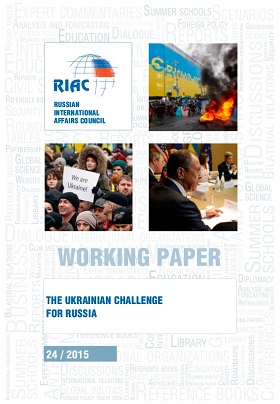 The West appears set to continue its economic and political pressure on Russia over Ukraine, avoiding direct military confrontation.

Events in Crimea and East Ukraine have demonstrated Russia’s determination to defend its interests in the post-Soviet space, as well as its formidable military potential and capabilities for swift redeployment and combined warfare. After the obvious underestimation of Russia’s capabilities, the West is unlikely to take pro-active military action to bring Crimea and/or East Ukraine back under Kiev’s control. What is more, Washington is in the middle of its Pivot to Asia, regarding Eastern and Southeastern Asia as the main theater for military-political confrontation and economic cooperation in the decades to come.

The West appears set to continue its economic and political pressure on Russia over Ukraine, avoiding direct military confrontation.

Along with the risks mentioned in the RIAC’s report, the ongoing conflict appears to spell some more bad news for Ukraine, namely socio-economic and ethno-territorial difficulties. According to the IMF, the Ukrainians are in dire straits, with a per capita income in 2015 at USD 2,108 against USD 4,435 in 2013. Kiev will have to find a way out sooner to stimulate its national economy during times of war, which appears to be quite a burdensome affair. Any further deterioration could cause a social implosion and a loss of legitimacy for the government, of course to Moscow’s benefit.

The conflict in eastern Ukraine is fraught with territorial problems in Ukraine's western territories. The hypothetical loss of several eastern lands may incite separatism among the 180,000-190,000 Romanians residing as a close community in Chernovtsy Region (20 percent of its population) and about 150,000 Hungarians in Zakarpattia Region. Their separatist sentiments may find support in Hungary and Romania, especially as these territories once belonged to these two countries. In other words, on the one hand, Kiev is hardly able to restore control over the regions ruled by pro-Russian forces, and on the other, the abandonment of Luhansk and Donetsk regions may give rise to separatism in western Ukraine, placing the country stranded between Russia and the West.

Besides, the financially emaciated European Union will be hardly enthusiastic about taking aboard the economically damaged and heavily populated Ukraine. 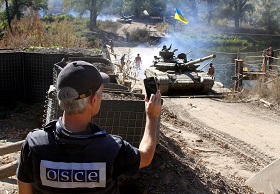 At the same time, the freeze in the Ukraine conflict may cause Russia considerable political and economic damage, given that some harm is already being done. Combined with an inefficient Russian economy, Western sanctions have already caused an

negative growth in 2015. Notably, Russia's economy had plunged into stagnation some time before the sanctions despite high energy prices in 2013. Additional harm has come from the sizeable oil price drop, in fact by more than half, over the past 18 months. As a result, budget revenues are trickling and the economy is stagnating for the second year in a row, demonstrating a 0.6 percent growth rate in 2014 and an up to 4 percent drop in 2015.

At that, the energy prices will not soar due to the worldwide diversification of sources through the shale revolution and alternative exploitation, as well as advances in energy savings. Furthermore, the market remains resilient to events in the Middle East in contrast to previous periods.

Russian involvement in the Syria conflict may generate a response from the oil producing Sunni monarchies, primarily from Saudi Arabia.

Also weakening Russia vis-à-vis the West is its technology dependence, what seems especially important, in oil production. With much equipment and systems coming from the West, Russia may find it increasingly difficult to build up output and develop new hard-to-reach deposits. For the same reasons, production may even go down.

The West may find the situation appropriate for taking a wait-and-see approach with no concessions made to Russia on Ukraine.

There are several more factors potentially detrimental for revenues and consequently for Russia's ability to maintain the status quo in Ukraine in the medium and long term. Russian involvement in the Syria conflict may generate a response from the oil producing Sunni monarchies, primarily from Saudi Arabia. Riyadh and its allies are expected to increase oil supply in order to reach two main goals. Number one is the replenishment of their own budgets by selling more oil at relatively low prices (global supply exceeds demand, exacerbating competition among providers), and number two is political and economic pressure on Russia to cut short its engagement in Syria. Production costs in Saudi Arabia are markedly lower than in Russia, hence lower prices will hit Moscow harder. Besides, the Saudis may use dumping to take over traditional Russian markets. Recently, there have already been Saudi oil deliveries to Poland, a country that normally receives Russian hydrocarbons. Russia can be hardly ousted from Poland but the trend seems disquieting during a time when the Europeans are willing to diversify their energy supplies. 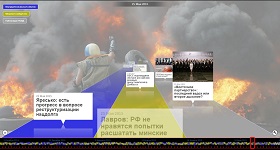 A lengthy freeze of the Ukraine conflict may prove unwelcome as it will incur numerous troubles both for Moscow and Kiev.

In this emerging environment, the West might regard the freezing of the conflict in the current state as the most effective method of political struggle in the medium and long perspective, because the confrontation delivers Russia significant economic damage and holds back its development along many tracks. Meanwhile, the losses sustained by the West as well as its political risks are somewhat negligible. Hence, the West may find the situation appropriate for taking a wait-and-see approach with no concessions made to Russia on Ukraine.

As a result, Russia may be forced to virtually maintain the welfare of three million residents of the devastated Luhansk and Donetsk regions. According to Stratfor, in 2015 Moscow will spend at least USD 5 billion (less than three percent of its GDP) to support de facto states, invest in Crimea and shore up pro-Russian entities in Luhansk and Donetsk regions. These expenditures will definitely rise and exert considerable pressure on Russia’s budget as it is suffering from a contracting GDP. At the same time, the confrontation with the West and the Syrian mission should bring Russia a major rise in military spending, inevitably at the expense of other needs. In the aggregate, the above factors will badly affect Russia’s budget, government and public. Consequently, the question arises over how dutifully Russian society will perceive an overall decrease in living standards, inflation and a likely increase in unemployment. In other words, the problem seems to be how long Moscow will be able to preserve the status quo on Ukraine without making concessions to the West. On the other hand, the public may perceive such concessions as a defeat with detrimental consequences for the authorities.

In a nutshell, a lengthy freeze of the Ukraine conflict may prove unwelcome as it will incur numerous troubles both for Moscow and Kiev. Hence, a unilateral solution seems improbable, which should drive the interested parties to a negotiated agreement.

Rate this article
Share this article
FOLLOW THE LATEST DEVELOPMENTS
Project
Russia and EU: Partnership Opportunities and Building of a Think Tank Network
Tags
Ukraine, USA, European Union, Russia, West
Reader's choice
HideShow
The Ukrainian Crisis and Strategic Stability
How Russia's Policy in the Middle East and North Africa is Changing After February 24
A Friendship Higher Than Alliance
BRICS — How Will the Organisation Get a ‘Second Wind’?
The Soft Power of India and Russia