On February 14, the leaders of Russia, Turkey and Iran will meet in Sochi to discuss Syria and hold separate bilateral meetings. Recently, new developments have emerged that could prove dangerous if each state pursues its own hidden agenda. The three states depend on the Astana format for settling the Syrian issue.

On February 14, the leaders of Russia, Turkey and Iran will meet in Sochi to discuss Syria and hold separate bilateral meetings. Recently, new developments have emerged that could prove dangerous if each state pursues its own hidden agenda. The three states depend on the Astana format for settling the Syrian issue.

By 2019, the Syrian government had regained control over most of its territory with help from its allies. Now, in addition to questions of the regime's survival, the clashing interests of Syria's supporters have taken on new prominence. In addition to Russia and Turkey's differences over Syria, the situation has been complicated by growing discord between Russia and Iran, even though both support the Assad government. They are trying to avoid sizing each other up, but they are also aware of the threat of mounting risks. Russia and Turkey have sought to involve Europe in the Syrian settlement process at the institutional level by establishing the Istanbul Four group of Russia, Turkey, France and Germany. Iran, despite being excluded, accepted the idea of its Astana partners quite calmly, mostly because it is assured of its standing in Syria and does not want the Gulf monarchies to strengthen their positions through investment in Syria’s post-war reconstruction.

The EU does not have a coordinated strategy for Syria, the region as a whole or the migration problem. Many Europeans propose moving the Syria issue back to Geneva, arguing that the establishment of the Astana platform is preventing progress at the main negotiations in Geneva. The Astana process participants and the Russian Foreign Ministry have said repeatedly that the Astana platform is designed to complement the Geneva talks, deal with technical aspects and implement the agreements, if any, on the ground. For Europe the problem is compounded not only by a general mistrust of its large eastern neighbors, but also internal divisions and US policy.

Russia has been doing its best to get European countries involved in the Syrian settlement process and post-war reconstruction, while also advocating the return of Syria to the Arab League so that the Arab countries, primarily the Gulf monarchies, will invest in post-war Syria. If more Arab countries join the process, added to the fact that such Saudi allies as Bahrain and the UAE have already restored diplomatic ties with Damascus, it would help counterbalance Iran’s role in Syria. There is a good chance of this because Iran needs to deal with its own problems, including those created by US sanctions.

Politicians in Tehran have noticed that Russia is distancing itself from its Iranian partners. After Israel bombed pro-Iranian forces in Syria despite the presence of Russian-made S-300 and S-400 air defense missile systems, Iranians wondered if these raids had been coordinated with the Russian military. However, it has also been suggested that Iran is tipped off about planned raids and therefore able to move its most valuable assets out of the targeted area. For its part, Russia openly speaks about the importance of protecting Israel’s security. Moreover, Arab media have reported unconfirmed clashes between the pro-Russian 5th Assault Corps and the pro-Iranian 4th Mechanized Division of the Syrian Arab Army (SAA) commanded by Maher al-Assad, the brother of the Syrian president. 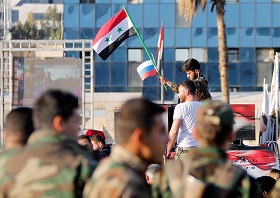 Andrey Kortunov:
Russia: the Power Broker in the Middle East?

Russian-Turkish relations appear to be less of a source of danger for the Syrian settlement process, because the countries are openly discussing their differences and ways to overcome them. It is becoming increasingly more difficult for Moscow to retain its position as an honest, if not completely independent, broker. Ankara may want to put distance between itself and its Astana partners, but the Astana process is nevertheless important for it because of tensions between Ankara and Washington and the unpredictability of the Trump administration.

The United States has announced its decision to pull out of Syria, but it still has troops there, mostly east of the Euphrates and on the border with Jordan near the Rukban refugee camp. Washington’s intention to withdraw from Syria suits Russia. Moscow does not need to accelerate the withdrawal of US troops as this may open up space for the Islamic State's resurgence. Rather, the US withdrawal should be gradual, considering that the US administration’s actions depend on regional conditions. The influence and lobbying activities of regional players, including the Kurds, in Washington are complicating and slowing the withdrawal of US troops. The same goes for European countries such as France, which has boots on the ground in Syria. It is obvious that US allies will eventually follow in the US wake due to their weakness on the ground.

The Americans have not set any deadline, but the decision to pull out has already been made. The situation will become even more complicated if the US cedes its responsibilities in Syria to its NATO ally, Turkey. What Ankara really wants from Washington is not withdrawal but a change of US policy, that is, US military support for the pro-Turkey opposition in Syria. However, this appears impossible now because of US-Turkish tensions and the US military’s unwillingness to be complicit in the harsh suppression of the Kurds, their former allies. Turkey claims that it is not against the Kurds per se but seeks only to fight terrorists and the predominantly Kurdish People’s Protection Units (YPG). The YPG, which Ankara in fact regards as a terrorist organization, is the core of the Syrian Democratic Forces (SDF) created by the US. Turkey is threatening to launch a military operation against them in northeast Syria to create (actually, to expand) a buffer zone on the Turkish border. Control of Qamishli, a large city that houses Syrian government agencies, is not part of the discussion, because Turkey is unlikely to seize it. The centerpiece is Manbij, which Turkey wants to win back from the SDF. But disparate forces are deployed in the city now, including a Russian military police unit. Ultimately, Ankara will need the go-ahead from both Washington and Moscow to send its troops and aircraft to Manbij.

Yulia Sveshnikova:
Iran’s Presence in Syria: Is It There for the Long Haul?

The Russian view on the issue of Syrian territory east of the Euphrates is rooted in respect for Syria’s sovereignty. Moscow believes that the Americans must pull out of the Syrian regions where they were deployed in violation of international law and transfer all the military logistics stations and armaments, including those delivered for the Kurdish forces, to the Syrian government. In this context, contacts between Syrian security officials, including Ali Mamlouk, and the local Arab tribal leaders will create the basis for these tribes’ reintegration into Syria. Damascus is negotiating with the Arab tribes to gain control over Raqqa and even Manbij. If the Syrian government assumes control of Manbij, this will conclude the active stage of the confrontation and mark a turning point in the Syrian campaign. But this will only be possible if the government and the Kurds, which have up to 50,000 troops, come to an agreement and settle the problem of Idlib.

It is believed that Turkey is willing to stop its operations in northeast Syria if the Syrian government and its allies do the same in Idlib. Ankara has faced problems carrying out its plans in Idlib, which has hindered the implementation of the agreement reached by the Russian and Turkish presidents in Sochi in September 2018, to create a buffer zone between the government forces and the opposition in Idlib and resume traffic along the highways from Aleppo to Latakia and from Damascus to Aleppo. Currently, the stronger group controlling most of Idlib Province, including its capital, is Hay’at Tahrir al-Sham (HTS, formerly Jabhat al-Nusra which is banned in Russia), which is on the UN list of terrorist organizations. Over the past two months, HTS has routed the majority of pro-Turkey groups and has become the key player in the province, which regional forces, including Turkey, have to take into account.

Turkey has about a dozen reinforced observation outposts in Idlib, which may mean that Turkey has come to an agreement with all groups on the ground, not just opposition forces such as the National Front for Liberation (NFL), which used to be Turkey's key ally but has been seriously weakened recently.

Two processes are underway there.

First, HTS leaders, including Abu Mohammad al-Julani, one of the most slippery actors of the Syrian war, claim that HTS is being deradicalized. Al-Julani is trying to win Turkey’s favor by demonstrating his group’s military capability and pragmatic policy. However, it is becoming increasingly difficult for him to portray his troops as part of the moderate opposition. At the same time, his actions are splitting HTS and weakening its structure. A case in point is Horas ad-Deen, a group of radical zealots who had split from HTS but later rejoined it.

Second, failure to implement the Sochi agreement is increasing the legitimacy of the ongoing military operation against terrorists in Idlib. Supported by Russia and Iran, the Syrian government forces feel free to conduct this operation in the province that is essentially controlled by terrorists. On the other hand, Russia and Turkey can fight foreign terrorist fighters and radical groups in Idlib, while also coordinating a special approach to the opposition groups which Russian diplomats sometimes describe as “healthy forces.” This calls for a very delicate approach. Russia, Turkey and Iran depend on each other in this sense, and not only because the devil is in the detail. The Astana partners know very well that, as the Arabs says, haste is the devil.

Iran’s Presence in Syria: Is It There for the Long Haul?

Russia: the Power Broker in the Middle East?

Russia and its partners can arguably win the war, but they cannot win the peace in Syria

The European Decalogue and the Middle Eastern Duodecim

The Middle East is in a much more complicated and difficult situation now than Europe was back in 1975, and it appears that replicating the Helsinki Decalogue in the region would be unproductive