Russia and Turkey: More Than a Rapprochement?

On August 9, 2016 a high level meeting between Presidents of Russia and Turkey took place in St. Petersburg. This crucially important summit was the first foreign visit made by Erdogan after the failed coup attempt in Turkey on July, 15.

On August 9, 2016 a high level meeting between Presidents of Russia and Turkey took place in St. Petersburg. This crucially important summit was the first foreign visit made by Erdogan after the failed coup attempt in Turkey on July, 15.

Historically speaking bilateral relations between Turkey and Russia have been shaped according to their respective relations, positive or negative, with the West. Today the situation is no different and the St. Petersburg summit was held against the background of both Ankara and Moscow having turbulent relations with Brussels and Washington. The Kremlin’s foreign policy goes against Western interests in Ukraine and the Black Sea. The result is ongoing conflict in Eastern Ukraine and economic sanctions against Russia. Turkey, on the other hand, is close to being isolated from international affairs. Turkey has historically been NATO’s ally. Still, Washington is supporting the Democratic Union Party (PYD) in Syria, which is considered in Ankara as a branch of the Kurdish Workers’ Party (PKK), which regularly organizes terrorist attacks in Turkey. The coup attempt, which put Turkey’s relations with its Western partners into further trouble, made the meeting between Putin and Erdogan more significant.

Adventurous and unsuccessful neo-Ottomanism is likely to be replaced by a neo-Kemalist foreign policy that focuses on national interests and respects the territorial integrity of Turkey’s neighbors.

There is no surprise that beside other issues the parties concentrated on discussing Syria. In geopolitical terms, Syria is a top priority for Turkey, just as Ukraine is of central interest to Russia. Russian decision, in late September 2015, to intervene in Syria had caused huge problems between Ankara and Moscow. After Russian SU-24 had been shot down by Turkish Air Forces, bilateral relations further deteriorated. By sending troops to Syria, Moscow was trying to find a common ground with the West by diverting attention away from Ukraine, where the interests are conflicting, to the Middle East, where parties are united by the ISIS threat. However, this policy did not produce expected results. EU sanctions against Russia have not been lifted and a massive confrontation in Ukraine is still possible. On the other hand, during this period Turkey has again developed strong relations with the West and considered revising its security policy regarding the Black Sea. Possible steps could involve a change in Convention of Montreux (1936), which establishes passage regime in Turkish Straits, was considered. This move could have severely undermined Russian interests in the region. Moreover, under previous minister Davutoglu there was a reinvented honey moon between Turkey and EU regarding migrant readmission and visa free deals. However, this policy did not produce desired results either. Under such conditions and after 7 months of crisis, Turkey and Russia have finally started rapprochement with Erdogan’s apology stemming from objective geopolitical necessities. 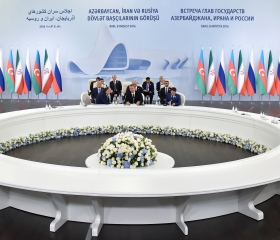 REUTERS/Alexander Nemenov
Viktor Katona:
The Birth of the “Caspian Three”?


Syria is a top priority for Turkey, just as Ukraine is of central interest to Russia.

The meeting has geopolitical significance since it exposed Putin’s eagerness to woo Ankara in its problematic status in formal Western alliance and Erdogan’s willingness to reconsider the place of Turkey in international system. At the moment Turkish foreign policy is at a crossroads and after the meeting one could argue that Turkey will be more courageous to follow a more independent policy. Amidst the deterioration of its relations with the European Union, the country will reinvigorate its involvement in Eurasian affairs. Ankara is expected to turn to China and Russia in an attempt to establish closer economic and political ties. Moreover, adventurous and unsuccessful neo-Ottomanism is likely to be replaced by a neo-Kemalist foreign policy that focuses on national interests and respects the territorial integrity of Turkey’s neighbors.

After two presidents met it is clear that Ankara and Moscow have similar posture on Black Sea security and underline the importance of status quo. More importantly, they are trying to find common ground to solve the Syrian crisis together. However, it remains to be seen if such policy leads to success due to very different policy choices so far. The key question is whether Moscow will stop its support of the Syrian Kurds in return for Ankara giving up its attempts to overthrow Bashar al-Assad administration. Declaration on unprecedented partnership in defense industry was one of the important points of the summit. The parties also agreed to form a joint military and intelligence mechanism to coordinate their activities in the Middle East, including Syria. With this mechanism, joint operations against ISIS could be started. In this case Turkey would be able to make cross-border interventions against PYD forces in North Syria to prevent completion of Kurdish corridor, envisaged under the US project of the Greater Middle East. This corridor would have open access to the Mediterranean Sea, is needed to keep the Kurdish state alive.

Brussels seemed to benefit from the deteriorating Turkish-Russian relations cautiously trying to force both Ankara and Moscow to accept its own rules of the energy game.

Another important topic of the meeting was energy cooperation. Akkuyu Nuclear power plant could be invigorated though financial problems are still there. Russian-Turkish gas relations are expected to progress as well, with revival of Turkish Stream project. In fact, within the general energy triangle between the EU, Turkey and Russia, Brussels seemed to benefit from the deteriorating Turkish-Russian relations cautiously trying to force both Ankara and Moscow to accept its own rules of the energy game. Brussels wants Turkey to be only a transit country (which goes against Ankara’s declared plans to be a regional energy hub) and to push it towards full liberalization of its natural gas market. As for Russia, the decision to put the Turkish Stream gas pipeline on hold increased the importance of Nord Stream – 2 as the only new natural gas transit route circumventing Ukraine. However, Nord Stream – 2 was also seen as an acceleratory tool to further liberalize Russian gas market harmonizing it with EU energy regulation. 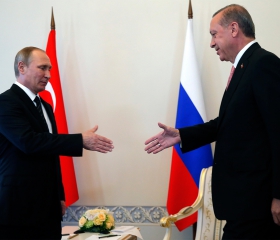 After presidential meeting, Turkish Stream is more prospective than before with two lines to be built for transportation of 31.5 bcm/a capacity. The 14 bcm of gas that are currently imported from Russia through Trans-Balkan line, could be diverted to Turkish Stream with the construction of first line. The second line could be used to export Russian gas to Southeast Europe. Nevertheless, due to the fact that Gazprom is conducting talks with European Commission (EC) to construct Nord Stream – 2, one could assert that the pipe game is far from over. Taking financial difficulties into account, Gazprom might also intent to use Turkish Stream as a leverage in its negotiations with the EC. Now competition between Nord Stream–2, Turkish Stream and even South Stream projects is reemerging and if the Nord Stream – 2 fails, the likelihood of the Turkish Stream becoming a reality will increase. Actually, Poland's objections to a joint venture for the Nord Stream – 2 project expressed through its anti-monopoly watchdog, has increased the likelihood of Turkish Stream.

Surprise of the summit was the preparation for establishing a trilateral cooperation mechanism between Azerbaijan, Russia and Turkey. This has potential to be transformed into a new institutional regime in Caucasus. If succeeds, it will have important geopolitical ramifications for the region. Karabakh problem could be solved in favor of Baku and also a new energy alliance between the three might be found. Such a move would have potential to undermine EU supply diversification plans by putting future of Southern Gas Corridor into question.

Due to the fact that Gazprom is conducting talks with European Commission (EC) to construct Nord Stream – 2, one could assert that the pipe game is far from over.

To sum up, it seems that after both suffering from the plane crisis Russia and Turkey finally agreed to look forward in their bilateral relations. With the St. Petersburg meeting Russia-Turkey relations, having based on economic cooperation for decades, are about to be upgraded to politically strategic level for the first time. This new era of ‘more than a rapprochement’ seems to work in the short term. Nevertheless, taking in consideration different interests of Turkey and Russia in some international issues and Turkey’s current membership in NATO, it is too early to talk about a full-scale strategic partnership between the two. Time will show whether Ankara and Moscow are really interested in and more importantly capable of forming such a political partnership that could become a real game changer in international system. In that sense, Syria will be the first test to observe the likelihood and future of the partnership.