The President of the Russian Federation’s recent visit to China was one of the most successful Russia–China top-level meetings in terms of practical content. The visit was also notable for the unusually high level of thinly disguised anti-American rhetoric on both sides and the adoption of an important joint political statement that may make a difference to Moscow and Beijing’s dialogue with the United States on strategic matters.

The President of the Russian Federation’s recent visit to China was one of the most successful Russia–China top-level meetings in terms of practical content. The visit was also notable for the unusually high level of thinly disguised anti-American rhetoric on both sides and the adoption of an important joint political statement that may make a difference to Moscow and Beijing’s dialogue with the United States on strategic matters.

In addition, the text of the joint Russia–China statement made as a result of Putin’s visit sets down the intention of the two sides to pursue a completely new integration initiative – the Comprehensive Eurasian Partnership – which would, in addition to the EAEU and China, include ASEAN countries. The initiative is still sketchy, but if it gets off the ground, the consequences could be immense.

The joint Russia–China statement on strengthening global strategic stability opens with a reference to the “dangerous trend” arising from the desire of “certain states and military-political alliances to achieve complete military and military-political superiority” in order to use force and the threat of force to further their interests. The declaration then goes on to accuse “certain countries and alliances” of evading a dialogue on making cuts to the types of weapons that “they consider to be instrumental in ensuring military superiority”.

Russia and China expressly state that they are concerned about the deployment of the United States Ballistic Missile Defence system in Eastern Europe and Northeast Asia “under false pretences”. The two countries then set forth their new vision of strategic stability which will likely provide the basis for future talks with the United States on strategic issues. Russia and China refuse to see strategic stability as a strictly military category confined to nuclear weapons.

Now strategic stability also includes non-interference in internal affairs and renunciation of coercive measures outside the UN Charter in the political sphere; ensuring a balance of the entire range of weapons at the minimum level necessary and a refusal to expand military alliances that could potentially threaten other countries.

The declaration is key to future world politics. It means that Russia and China have worked out a coordinated position in response to any announced or future U.S. with regard to nuclear weapons. Both countries apparently see nuclear weapons as one of the foundations of their security and intend to parry any U.S. anti-nuclear initiatives by demanding that nuclear issues be discussed comprehensively, taking conventional weapons and the non-military aspects of security into account.

Similarly, a common position has been confirmed at the top level for another key topic on the world agenda, namely, information security. The parties did not just confirm and specify their views on the issue, but agreed to set up a permanent mechanism of consultations in this area. On the Russian side, it will be headed by the presidential adviser on information technologies, while the Chinese side will be represented by the head of the Office of the Steering Group of the Central Committee of the Communist Party of China on Information and Network Security. 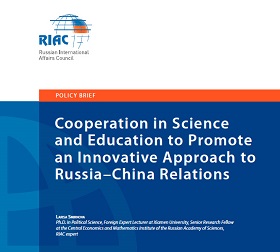 Larisa Smirnova:
Cooperation in Science and Education to
Promote an Innovative Approach to Russia–
China Relations

Russia and China have worked out a coordinated position in response to any announced or future U.S. with regard to nuclear weapons.

As for economics, a number of important agreements that had been in preparation for a long time have been finalized. Most important is the agreement whereby the Chinese side will provide $12 billion to finance the Yamal-LNG project. The agreement to create a Russia–China joint venture for building a wide-bodied aircraft is also important. It gives Russia a measure of confidence in remaining part of this extremely important and massive Chinese project, which in turn may be critical for Russian civil aviation. After many years of negotiations, the Russia–China project to create a heavy transport helicopter has moved into the practical implementation stage. The project has a long history (the first talks began after the 2008 Sichuan earthquake, when Russian Mi-26 helicopters played an important role in the rescue operation). For a long time there was a sense that the project would never reach the practical stage because of differences between the sides, but now there are signs that it will get off the ground. The agreement on cooperation in the production of liquid-fuel rocket engines for carrier rockets and the supply of Chinese avionics is important for the space industry.

Considerable progress has been made in the preparation of major joint projects for the future. One example is the memorandum of understanding between Gazprom and China National Petroleum Corporation (CNPC) on the participation of the Russian company in gas storage and power generation in China, which will probably make it possible to move forward on signing an agreement on gas supplies via the western route. Preparation of an agreement between Rosneft and Sinopec on building a petrochemical complex in the Far East has entered the final stages. Rosneft has signed an agreement with Beijing Gas Group on the main principles of the Chinese purchase of a 20 per cent stake in Verkhnechonskneftegaz. Finally, progress has been made on important aspects of localizing production and financing the large high-speed Moscow–Kazan railway project in the future.


One problem that remains in relations between the two countries is the low quality of “managing the expectations” of the two governments, as well as those of the general public, with regard to bilateral relations.

Thus, the results of President Putin’s visit give grounds for noting substantial progress in cooperation. Better results could hardly have been expected in many areas considering the state of bureaucracy in both countries and the practice of doing business at the start of the Ukraine crisis.

One problem that remains in relations between the two countries is the low quality of “managing the expectations” of the two governments, as well as those of the general public, with regard to bilateral relations.

The problem is particularly catastrophic in Russia considering the well-known propensity of the Russian state propaganda to create a ballyhoo around political plans as soon as they begin to assume barely discernible shape. Fostering exaggerated and patently unrealistic expectations in a bid to derive temporary political mileage inevitably ends up in disappointment and discredits the project. In recent years, this approach has ruined the reputation of countless important reforms and economic and technological programmes which, strictly speaking, could be seen as a total or partial success.

In Russia, the propaganda campaign surrounding the “pivot to the East” in 2014 generated unwarranted hopes for progress in bilateral relations. Predictably, they were followed by equally unwarranted “disenchantment” in 2015, when absurd rumours began to circulate that “China has practically joined sanctions against Russia” and that no progress in Russia–China cooperation was being made.

Russia and China – No Negative Competition
Should be in Sight


There is a need to develop a legal framework and create financial institutions to service bilateral trade with due account of the experience of economic links between China and Iran.

The reality, however, is more prosaic. For objective reasons, such as geography and the structure of the economy, Russia–China cooperation hinges on a limited number of very large projects in energy, infrastructure and industry. Each project involves years of negotiations and approvals. Speeding up this process inevitably undermines the quality of the agreement for the country seeking to accelerate it (i.e. Russia). That would be unreasonable considering the long-term character of the deals under discussion and the relatively mild nature of the crisis of the Russian economy.

China of course, far from “joining the sanctions,” is known to have offered help to Russia at the peak of the crisis. The assistance was declined, apparently due to Moscow’s reluctance to weaken its negotiating position.

As for business relations, both Russian and Chinese companies depend almost totally on the U.S.-controlled financial and information infrastructure in their international activities. To be sure, the introduction of sanctions against Russia was not a stimulating factor. Problems attracting Chinese investments were predictable. There is a need to develop a legal framework and create financial institutions to service bilateral trade with due account of the experience of economic links between China and Iran (whose mutual trade exceeded $50 million before oil prices plummeted). The trade mechanisms between China and Iran are designed to function in the context of the economic war with the West.

Rate this article
Share this article
FOLLOW THE LATEST DEVELOPMENTS
Project
Russia and China: Partnership in the Context of Security Challenges and Development in the Asia Pacific
Tags
Russia, China, USA, International security, ASEAN, EEU
Reader's choice
HideShow
The Nuclear Triad: Alternatives from the Days Gone By and Possible Futures
Washington Likely to Ask EU Allies to Share More Burden on Aid to Kiev after Midterm Race
American Attempts to Preserve Hegemony Will Only Make the Transition to a New World Order Harder for Washington
USA Versus USA: Why American Business Also Loses from Sanctions
New Hope: Openings of APEC-2022 Summit