Waiting for the Intra-Afghan Dialogue to Begin

The issue of Afghanistan has become a real headache for Donald Trump. When he came to office, he vowed to put an end to the Afghan adventure of his predecessors, without harming the pro-American regime in Kabul. But before any real progress could be made in this direction, the United States first had to engage in difficult negotiations with the Taliban, which began in the autumn of 2018 and clearly raised the ire of the central government in the Afghan capital.

A number of consultative entities have been set up in recent years both inside and outside the region that have, among other things, set out the common positions of all the participants in the intra-Afghan dialogue. In this regard, alongside the launch of this dialogue, it may be worthwhile to hold an international conference where all interested parties from outside the region could come together to reaffirm their stances on the problem of intra-Afghan reconciliation. Such an event may go a long way to preventing future negotiations from getting bogged down in low-priority, fleeting issues that take attention away from real, long-term problems.

The COVID-19 pandemic has led to rapidly growing uncertainty at the global and regional levels. The United States has been hit particularly hard, and in the most unexpected of ways, and is now facing a serious internal crisis with a number of unknowns. Moving forward, this may lead political elites to question many of the postulates of Washington’s domestic and foreign policies, which had until recently seemed unshakable and immune to erosion. 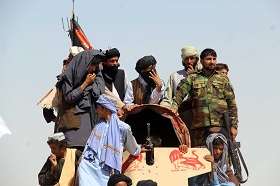 And now Trump, trying to get ahead of events and ride his luck into the November elections, has announced that a plan for social change is in the works. Speaking recently to graduates of the West Point Military Academy, the President unexpectedly announced that the U.S. military would “no longer rebuild other countries” and “solve other people’s conflicts,” which is noteworthy because the country’s leaders typically use this occasion to publicly formulate the main postulates of the United States’ foreign and military policies. Let us recall, for example, the South Asian concept (the so-called AfPac) put forward by Barack Obama during a speech at West Point in 2008. The primary objective of AfPac was to withdraw U.S. troops from Afghanistan in a phased and painless manner (to the extent that this was possible) while at the same time partially shifting the focus of U.S. policy in the region to resolving the longstanding conflict between the central authorities in Kabul and the Taliban movement. However, Washington was unable to achieve any real progress in either of these areas during Obama’s presidency (the George W. Bush administration was equally unsuccessful here).

The issue of Afghanistan has become a real headache for Donald Trump. When he came to office, he vowed to put an end to the Afghan adventure of his predecessors, without harming the pro-American regime in Kabul. But before any real progress could be made in this direction, the United States first had to engage in difficult negotiations with the Taliban, which began in the autumn of 2018 and clearly raised the ire of the central government in the Afghan capital. The Taliban had initially insisted on the unconditional withdrawal of U.S. contingents from the country and wanted nothing to do with the government of Afghanistan, expecting, and not without good reason, that it would simply capitulate in the face armed and aggressive opponents. In the end, after 18 months of shuttle diplomacy on the part of Special Representative for Afghanistan Reconciliation Zalmay Khalilzad, the parties finally came to an agreement in February 2020 and signed a joint document stating that, in exchange for the withdrawal of troops, the Taliban would launch a dialogue with Kabul on the division of power and cut all ties with the terrorist structures of al-Qaeda.

Both sides claimed that they had got the better end of the deal. Washington balanced the agreement by promising that it had not abandoned its military and political obligations to Kabul. For their part, the Taliban consolidated their military and political status as one of the sides in the Afghan conflict, speaking on behalf of the unrecognized Islamic Emirate of Afghanistan (although the reaction to the agreement on the part of the Taliban movement’s military commanders was somewhat mixed). All this notwithstanding, the Taliban, as before, were content to sit back and wait for the coalition government in Kabul to quickly collapse. And these were not empty hopes, as the internal strife within the ruling elite threatened to give the Taliban exactly what they wanted. The contradictions led to yet another large-scale political crisis following the hotly contested presidential elections in 2019. Just like the last election in 2014, opposition leader Abdullah Abdullah did not recognize the legitimacy of the results that saw Ashraf Ghani retain his position as the country’s president and set about organizing his own parallel government. The dispute remained unresolved until March 2020, when Washington threatened to suspend its rather generous financial assistance. 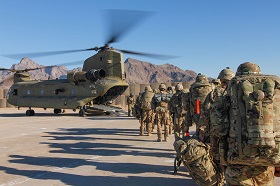 Ruslan Mamedov:
Escape from Responsibility: the U.S. Is Looking for a Way Out of Afghanistan

Under the new agreement, several ministerial posts were handed over to Abdullah’s supporters, while Abdullah himself was named Chairman of the Supreme National Reconciliation Council, making him the second-highest ranking official in the country. The Council’s mandate includes holding negotiations with the Taliban movement, although any agreements made as a result of these talks will have to be approved by the President. In this regard, it is entirely possible that Abdullah’s status may become politically vulnerable due to the unpredictability and numerous pitfalls of the upcoming intra-Afghan negotiations. The fact that Abdullah’s appointment was met without any real enthusiasm by the Taliban could also be an important factor here, although they did confirm that they were willing to negotiate, nonetheless. At the same time, the Taliban did not want the negotiations to take place on neutral territory and successfully lobbied for them to be held in Doha, where the previous agreements with the United States had been hammered out, and where the organization maintains its political office.

While Trump did not explicitly mention Afghanistan at West Point, he did not have to. Everybody understood what he was talking about. All the more so because the President had discussed his intention to pull troops out the country before the elections in November. Only time will tell whether or not he will actually do it. The thing is, if we do not see any real steps made in the intra-Afghan process, then the Americans will find it increasingly difficult to put on a happy face. This is what makes the joint call of the special representatives of Russia, China, Iran and Pakistan for foreign troops in Afghanistan to “withdraw in an orderly and responsible manner to ensure a smooth transition” published on May 18, 2020, particularly relevant. Both the government of Afghanistan and U.S. officials have made it clear that they are ready to open the intra-Afghan dialogue, which could take place very soon. In fact, discussions are already underway in Kabul regarding the rules of the meeting and the creation of its working and administrative bodies. Meanwhile, several external actors who have a vested interest in Afghanistan’s future have gone to great lengths to show the world that they should be the ones to host the negotiations.

In the midst of all this, almost no one is talking about what the main substantive content of the negotiations should actually be. To begin with, the talks should not revolve around the division of power (that is, what powers each side will be vested with and what state and other structures they will control). Instead, they should focus on the very political, ideological and economic basis of the future power structure in Afghanistan. 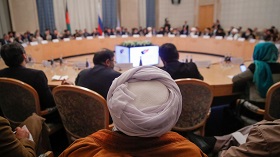 Right now, Kabul and the Taliban have diametrically opposite views on this issue. For example, the central government calls for a republican form of government based on the principles of moderate Islam and respect for the fundamental documents of modern international law. Meanwhile, the Taliban continues to promote the concept of building a fundamentalist Islamic emirate, something that it reiterated following the recent negotiations with the United States. And it does this despite the fact that the overwhelming majority of external actors (both inside and outside the region) have unequivocally stated that the Taliban’s claims to sole rule in Afghanistan are unacceptable. Given all this, it would seem that the only way for the parties to come to an agreement on the future state structure of the country is if concessions are made on both sides.

The international and regional community could, and indeed should, play a big role in this process. We are talking primarily here about countries in the immediate vicinity of, or in close proximity to, Afghanistan, as well as about the European Union. All these countries have been keeping a close eye on events in Afghanistan over the years, and during this time, they have developed a number of common approaches to how they see the future of the country, with unconditional respect for its sovereignty and territorial integrity. The consultations between the members of the tripartite group consisting of the United States, Russia and China set up to more or less coincide with the launch of U.S.–Taliban negotiations proved instrumental in moving the process forward. Russia then pushed for the mechanism to be expanded to the 3-plus format to include Iran and Pakistan, but Washington’s desire to isolate Tehran from the Afghan problem as much as possible meant that the proposal did not have its intended effect.

At the same time, a number of structures have been set up in recent years both inside and outside the region that have, among other things, set out the common positions of all the participants in the intra-Afghan dialogue. In this regard, alongside the launch of this dialogue, it may be worthwhile to hold an international conference where all interested parties from outside the region could come together to reaffirm their stances on the problem of intra-Afghan reconciliation. Such an event may go a long way in preventing the future negotiations from getting bogged down in low-priority, fleeting issues that will take attention away from real, long-term problems.

Rate this article
Share this article
FOLLOW THE LATEST DEVELOPMENTS
Project
Political and economic dynamics in the countries of Central Asia
Related materials
The Inter-Afghan Talks: Transforming the Taliban

Escape from Responsibility: the U.S. Is Looking for a Way Out of Afghanistan

Challenges to Eurasian Security in the Coming Decade

Tags
Afghanistan, Taliban, USA, COVID-19, Russia, Iran, Pakistan, China
Reader's choice
HideShow
Central African Republic: to See the Light at the End of the Tunnel
Results of 2021: Sanctions Policy
Platform Modernisation: What the US Treasury Sanctions Review Is All About
Political Extremists, Gangs First Ones to Gain from Kazakh Turmoil
Ukrainian Crisis: Political Economy of Confrontation