Russia's Forbearance in the Turkish Crisis Should Be Applauded — And Reciprocated

Associate Professor of Sociology & Social Policy, the University of Sydney

As ‪‎Russia‬'s response to this week's Turkish crisis shows, force need not be met by force in an ever-escalating spiral. Instead of seeking revenge, Russia's response to the crisis has been ... to "seriously reconsider" its relationship with ‪Turkey‬. No missile attacks, no retaliatory air strikes, no expulsion of Turkish diplomats. Just a serious reconsideration. It should be a lesson to all sides that punishment is rarely the solution to international problems. The problems of Syria are very complicated and it is not at all clear that military action will solve them.

It is time for the West to end to its economic sanctions on Russia.

As Russia's response to this week's Turkish crisis shows, force need not be met by force in an ever-escalating spiral. Whether or not a Russian jet strayed into Turkish airspace on November 24, 2015 it was irresponsible bordering on insane for the Turkish military to shoot it down. The ensuing cold-blooded murder of its pilot while parachuting to the ground was an outright war crime. In situations like this, calls for revenge can ring loud and clear.

Instead of seeking revenge, Russia's response to the crisis has been ... to "seriously reconsider" its relationship with Turkey.

No missile attacks, no retaliatory air strikes, no expulsion of Turkish diplomats. Just a serious reconsideration. And given the gravity of the situation, some reconsideration is certainly in order.

Russia should be applauded for showing restraint when a show of force might have been much more popular with patriotic opinion at home. A show of force might also have been a smart geopolitical move. Many Western experts feared that a Russian retaliation against Turkey might put American and European leaders in a quandary and even lead to the unraveling of NATO if the Western powers did not give Turkey their full support. 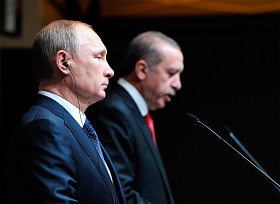 EPA / MIKHAIL KLIMENTYEV
Ilshat Saetov:
From Downed Plane to the Greater Middle East:
Theories of What Happened in Turkey

Some American pundits' calls for unconditional support bring to mind Germany's famous "blank check" to Austria-Hungary in 1914. After the assassination of Austrian Archduke Franz Ferdinand and his wife in Sarajevo on June 28, 1914, Germany assured Austria-Hungary of its full support in whatever action Austria-Hungary might take in response. The result was the First World War.

We do not know what assurances President Obama may or may not have given to President Erdogan of Turkey on Tuesday, but the Turkish government has neither apologized nor taken steps to minimize the consequences of Tuesday's missile attack. Given the pace of events, the decision to fire on the Russian plane must have been made by officers on the spot, but the Turkish government has stood by its military's actions. Turkey has so far been inflexible and intransigent.

Russia by contrast has acted in a mature and responsible manner. It has reaffirmed its commitment to the war in Syria and announced that it will deploy additional anti-aircraft missiles to the country but has refrained from taking any lethal action. In a region awash in air strikes, arms shipments, and mass terrorism, any forbearance is welcome.

It should be a lesson to all sides that punishment is rarely the solution to international problems. The problems of Syria are very complicated and it is not at all clear that military action will solve them. France's desire to punish Islamic State for the November 13 Paris attacks is understandable, but can air strikes really bring terrorists to justice? All sides in the Syrian civil war – including Russia and the United States – should be more cautious in resorting to violence to achieve their objectives. 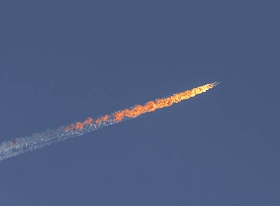 Anadolu Agency / Fatih Akta
Kerim Has:
Post Mortem by the Turkish Side: Relations
between Moscow and Ankara Worsen

But Russia's forbearance in responding to Turkey's attack is an example to be followed. It should remind the United States and other Western powers that provocation does not have to be followed by punishment. When Russia annexed Crimea in March, 2014 the Western powers responded by punishing Russia with economic sanctions, sparking a currency crisis and much hardship for ordinary Russian people. Whatever the merits of Russia's actions in Crimea, sanctions have done nothing to reverse them.

Sanctions are much easier to impose than to remove, but unlike human fatalities they are ultimately reversible. Just a few days before Tuesday's Turkish attack, Western leaders meeting in (of all places) Ankara reaffirmed their commitment to economic sanctions on Russia. In light of the attack – and Russia's response – the United States and its NATO allies should reconsider this decision. Western economic sanctions on Russia should be discontinued. They never should have been imposed in the first place.

As Russia has worked to deescalate the emerging Turkish crisis, the United States should work to deescalate the long-standing Ukraine crisis. Largely unacknowledged in the west, the Ukraine crisis drags on and is once again becoming acute. Crimea has been without power since Ukrainian guerillas blew up electricity pylons on November 20 and 22. Coal, gas, and air embargoes are in place or coming soon. Preoccupied by ISIS and a host of other crises, the United States and its allies have hardly noticed. But the conflicts in Ukraine would be much easier to solve than the conflicts in Syria. All it would take is the political will to solve them. 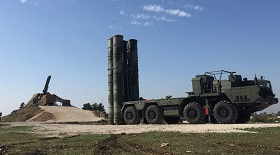 Sputnik / Dmitriy Vinogradov
Yuri Barmin:
Following the Downing of its Su-24 Russia
Changes the Rules of the Game in Syria

Most Americans are never going to agree with Russia's actions in Syria and Ukraine, and most Russians are never going to agree with America's actions in Syria and Ukraine. But a good first step toward peace in these and all conflicts is to refrain from fighting. Russia has refrained from fighting with Turkey and thereby saved the NATO alliance from a potentially devastating existential crisis. The United States and its allies should reciprocate by canceling their economic sanctions on Russia.

Russia and the West may never be allies or even partners, but they can and should live in peace. Countries are not children. Punishing them does not change their future behaviour. Russia's leaders have shown in the Turkish crisis that they are adult enough to understand this. Western leaders should grow up and learn from this Russian example. Peace is more important than retribution. Peace should be restored in Ukraine – and by extension between Russia and the West – before Ukraine too goes the way of Syria.