Missouri vs. China: Toward a New Crusade?

COVID-19 is becoming a key element in the US-China relations. The United States directly calls China the cause of the novel coronavirus pandemic. A month ago, such accusations seemed like void political rhetoric. Today they are acquiring a qualitatively different meaning. They have formed a deep and irreversible funnel, which draws into itself an ever wider range of problems and processes. The speed of the confrontation is accelerating, and it will be extremely difficult to soften its inertia.

COVID-19 is becoming a key element in the US-China relations. The United States directly calls China the cause of the novel coronavirus pandemic. A month ago, such accusations seemed like void political rhetoric. Today they are acquiring a qualitatively different meaning. They have formed a deep and irreversible funnel, which draws into itself an ever wider range of problems and processes. The speed of the confrontation is accelerating, and it will be extremely difficult to soften its inertia.

The key driver of the confrontation is the election campaign in the United States. The question of punishing China for COVID-19 will be one of its key factors. Republicans have already tried to seize the initiative. Texas Republican Senator Ted Cruz introduced the first related sanctions bill against China (“Ending Medical Censorship and Cover Ups in China Act of 2020.”). Ratifying a bill into law is a complex and often lengthy process. If it becomes law, the document will oblige the US president to identify a circle of people who prevented or censored the dissemination of information, and also punished Chinese citizens for disseminating information, including epidemiological information. The US president will be required to update this list at least once a year. Blocking sanctions should be introduced against the persons involved in the list, that is, citizens and organisations from the United States will be prohibited from engaging in any economic transactions with them. Simply put, these individuals will be on the “black list” of the US Treasury (SDN-List). Visa restrictions will also be imposed against them.

Andrey Kortunov:
The Battle of “Coronavirus Narratives”: Three Lines of Defence Against China

Anti-Chinese topics are becoming more pronounced at the level of election rhetoric. Judging by one of the recent documents prepared for the Republicans by the consulting company O’Donnell and Associates, the party’s key line may be harsh criticism of China, a call for sanctions, as well as criticism of the Democrats for an excessively mild approach to China. Nikki Haley, a member of the Republican Party, who until 2018 was the US Permanent Representative to the United Nations, launched a campaign to collect signatures which used extremely harsh slogans against China. The petition calls on Congress to take tough measures to counter the “communist government” of the PRC. US President Donald Trump, who has criticised both China and the World Health Organisation, has offered verbal support to his fellow party members.

Apparently, the Democrats will have no choice but to maintain a hard line. They will criticise Republicans for their unpreparedness for the pandemic, as well as for undermining efforts to increase access to healthcare for US citizens. Perhaps the epidemic in America would have been milder if the unprotected sections of the population had had greater access to health services. But when engaging in anti-Chinese rhetoric, it makes no sense to counteract the pressure of the Republicans. Therefore, the attack on the PRC will most likely be bipartisan in nature.

It is interesting that the accusations against China immediately acquired colourful ideological undertones. Practically all accusatory speeches or documents emphasize that China is a communist state.

A dispute concerning a particular problem has immediately been reduced to an “Us vs. Them” identity conflict. “We” are an honest, democratic and open society that has fallen victim to ‘their’ policies of manipulation and deception, derived from communism and an authoritarian regime. Cold war clichés are quickly retrieved from archives. The truth is that now China has taken the place of the USSR.

In a detailed and formalised form, claims against China have been collected in a recent lawsuit in Missouri. The lawsuit was filed with the Missouri Eastern District Court. The plaintiff is Missouri Attorney General Eric Schmitt. There are several defendants. First, China as such. Second, the Communist Party of the PRC, a number of ministries and departments, the governments of Hubei and Wuhan, the Chinese Academy of Sciences and the Institute of Virology in Wuhan. The essence of the lawsuit is that as a result of a number of deliberate actions or omissions of the defendants, the COVID-19 virus entered the state of Missouri (the same wording can be substituted into the lawsuit of any other state if desired) and thereby led to the death and illness of large numbers of people and economic losses worth many billions of dollars. The key claims of the plaintiff include the following: 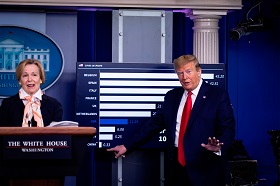 Almost all claims are based on open data from the American press and television — The New York Times, The Wall Street Journal, Fox News, CNN. The lawsuit has practically no direct evidence of doctors, experts and other specialists, statistics, or they are transmitted through articles in the media, which in themselves can be biased. In other cases, claims are accompanied by the wording “on information and belief”. It implies that the opinion expressed is based on secondary sources that the plaintiff believes are true (but are not necessarily such) and is used to insure against counter-accusations of perjury. In other words, the actual basis of the claim is very blurred — these are the personal beliefs of the plaintiff, based on data obtained from secondary sources or the information that he considers correct.

The lawsuit of the state of Missouri is a kind of quintessential reflection of US claims against the PRC. Most likely, similar claims will be filed by other states and have already been submitted by individual citizens and organisations. The big question is what kind of evidence they will be able to collect in addition to publications in the media and secondary sources.

The legal future of lawsuits against China appears to be vague. However, it is clear that a set of claims against the PRC will be actively promoted by politicians, officials and the media. And they, unlike courts, do not need hard evidence. Opinions and newspaper publications are quite enough.

The danger of this development is the aggravation of a wider range of US-Chinese contradictions that have accumulated over recent years. COVID-19 can unexpectedly quickly and nonlinearly accelerate their concentration. The prospect of a new Cold War and yet another “crusade” loom on the horizon.

Rate this article
Share this article
FOLLOW THE LATEST DEVELOPMENTS
Related materials
The Thucydides’ Trap: the Avoidable Destiny Between the US and China

As the Western philosopher George Santayana said, “those who cannot remember the past are condemned to repeat it.”

It’s not an ideological war, but rather a soft power battle

The Battle of “Coronavirus Narratives”: Three Lines of Defence Against China

The West, particularly the United States, is crying out for an alternative to the Chinese coronavirus narrative. And now more so than ever, as the outlines of a post-corona bipolar world are coming into sight

Tags
USA, China, Coronavirus, Sanctions
Reader's choice
HideShow
Expert Opinions on Russia’s Basic Nuclear Deterrence Principles
President Joe Biden and Russia
Shrinking Cyber-Universe
Will There Be an End to the Korean War?
The War in Libya: Is the Defeat of Khalifa Haftar Complete