Graduate Student at the Russian State University for the Humanities, RIAC Expert

Volodymyr Zelensky’s victory was hardly a surprise for anyone in Ukraine. Polls conducted in the last few weeks showed that Ukrainian people were more interested in the new president they elected last Sunday than in the incumbent. Even though many people were certain that the founder and leader of Studio Kvartal 95 would win, what should be expected of a president with no political experience is still a mystery.

Most likely, the new president’s policy will soon look very much like the current one. In addition, he will have to perform a balancing act between various groups in Ukrainian society, attempt to keep his promises and sit down at the negotiating table with all the external actors that are to some degree or other involved in the war in Eastern Ukraine.

Russia should be cautious in this situation, aiming for negotiations with Ukraine’s new leader and his team in order to establish relations with its neighbor – relations that have been lost over five years.

Volodymyr Zelensky’s victory was hardly a surprise for anyone in Ukraine. Polls conducted in the last few weeks showed that Ukrainians were more interested in the new president they elected last Sunday than in the incumbent. Even though many people were certain the founder and leader of Studio Kvartal 95 would win, what should be expected of a president with no political experience is still a mystery. 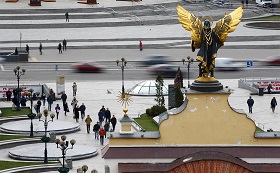 Igor Ivanov:
Helping Ukraine to Help Ourselves
Today, Ukraine’s foreign policy is just as important as the domestic policy tasks that the political elites and president-elect face. Let us consider the foreign policy issues that Zelensky faces today and outline a few trends and scenarios for the development of the situation.

The Conflict in the Donbass

Zelensky has emphasized his commitment to continuing work in the Normandy Four and complying with the Minsk agreements. However, he did not rule out the possibility of “resetting the format.” Additionally, the president-elect declared his readiness to conduct talks with Russia on the return of prisoners and the cessation of military hostilities in Donbass. In this connection, his campaign statement that it is quite normal that Stepan Bandera is a hero and an idol for some Ukrainians is somewhat unexpected. On the whole, the statements he made during his campaign and now as the president-elect allow us to conclude that Ukraine’s new leader does not yet have a clear idea of how Ukrainian society could be consolidated: the differences in people’s perceptions of history and their ideas of the country’s future are too great. Therefore, it would stand to reason to suppose that Zelensky would engage in a balancing act between the interests of Ukrainian people from different regions until he finds an idea that would be understandable and interesting for all. One could also suppose that, for a while, Zelensky will operate in a very similar manner to the current president, and his policy will be a continuation of sorts of his predecessor’s policy simply because elections to the Verkhovna Rada will only be held this autumn (unless, of course, the decision is made to call an early election). It will not be easy to revise international contacts and arrangements over a few days.

The new President’s balancing act will be a complicated one: today, part of the Ukrainian population perceives any talks with Russia as a capitulation. Moreover, there is still a certain group of people who believe that the pro-Western and nationalist policy is entirely wrong. Here again, the question arises as to what idea the new president will be able to offer to the public to garner the respect and approval of the majority. It would be a mistake to think that Zelensky already has the support of almost all the Ukrainian people. To be sure, he did receive over 70 percent of the votes, but we should remember here that some voters (actually rather significant amount) were voting against Poroshenko rather than so for Zelensky. Ekaterina Chimiris, Olga Pylova:
New European Mythology for Ukraine
We suspect that it is time for Ukraine to start building its identity without ties to external factors — pro-European leanings or confrontation with Russia. In the near future, Ukraine’s foreign policy will depend on the ideas that the president-elect decides to introduce into society. In this situation, the experience of Germany might be useful: a country that had been split for centuries and had no statehood became one of the region’s most successful states, largely due to its national solidarity. Germany succeeded because it placed an emphasis on civil, rather than national identity and stressed the common goal of building a democracy and a prosperous economy. As for short-term forecasts of the president’s activity, it should be noted that Zelensky will have to keep some of his biggest promises in the near future so as not to lose his electoral support. It is also important to keep in mind that, during his campaign, Zelensky made every effort to emphasize that he does not know the answers to many questions and would only look for them. This relieves him of the necessity to end the war in the east, get Crimea back, etc., overnight. Most likely, in regard to foreign policy, the new president will engage in talks with all the parties relevant to or having an influence on the situation in Ukraine, and particularly in Donbass. Maybe this will not produce immediate results, but it will boost his reputation in society. We should not expect a military escalation in the near future; however, we cannot rule out provocations by those members of the Poroshenko team who still remain in power and who certainly will want to dent the authority of the new president. In this situation, Russia should probably abstain from any abrupt moves in regard to Ukraine’s new leader. Certainly, the media has run news on the people that Zelensky will put on his team, what they are known for and what they did before becoming members of the government. Today, however, Moscow should understand that with a new president coming into power in a neighboring country that is no longer overly friendly, there might appear a chance to renew relations or at least keep them neutral. In that connection, if the Russian government is planning to adhere to the official rhetoric and hopes to restore relations, the Kremlin must engage in talks at all levels and aim to establish contacts. It is no secret that the restoration of Russia–Ukraine ties would benefit the economies of the two countries and serve as a reason for the West to release at least some of the pressure on Russia, however small that might be.

Assessing the prospects and context of Ukraine’s EU drive

Helping Ukraine to Help Ourselves

Tags
Ukraine, Volodymyr Zelensky, Russia, European Union, Elections
Reader's choice
HideShow
South Korean Arms for Canada and Poland: NATO’s Reserve Arsenal for Ukraine?
The Distributed World
Does Syria’s Road Back to the Arab Family Go Through the UAE?
Karabakh in Crisis: Toward a New Road of Life
Asia, Eurasia and the European Crisis: Results of 2022