The year 2016 is important for understanding the changes in the international arena that started two years before. It was in 2016 that we began to see the new reality – the more or less clear contours of the future – take shape. Let’s analyze the contours of this new reality.

The year 2016 is important for understanding the changes in the international arena that started two years before. It was in 2016 that we began to see the new reality – the more or less clear contours of the future – take shape.

Nothing was so clear in 2014, which was marked by the abrupt transformation of Russia’s relations with the outside world. This was also true of 2015, as too little time passed since key players made extremely consequential decisions whose long-term effects were still vague. However, in 2016 the opportunities and limits of world politics became more discernable. The past year etched a new groove in history that is not very deep but still noticeable. At the same time it ultimately demonstrated the weakness of the foundations that seemed immutable, by sheer force of inertia, just a couple of years ago. Let’s analyze the contours of this new reality.

The era of security is a thing of the past for Europe and the West as a whole. The twenty years since the end of the Cold War provided a very favorable environment for the citizens of Western states: the absence of a serious external threat, technical, economic and moral dominance, and a high level of personal security and quality of life. The weakness of the threats it faced afforded the West an unprecedented level of freedom of movement and social mobility. The year 2016 witnessed the end of this era. Acts of terror, migrant problems, crises in peripheral states and other difficulties existed before as well, but the past year showed that these events are a stable trend rather than the confluence of accidents. From now on security will be a key issue on the Western agenda. It is also important that Russia and the collective West find themselves on opposite sides of the barricades in terms of resolving security problems, although both face common challenges that can only be confronted together. The past year seems to have finally established a status quо in Ukraine. The Minsk agreements cannot be carried out in a sequence that suits all sides. A momentous deal on this issue is hardly possible in the near future because the issue is too complicated. The sides will have to make a package of deals but have neither the time nor enough self-restraint for this. In Syria, Russia and the United States found themselves on the brink of open conflict and a new round in the war of sanctions. In this sense 2016 also cleared the air. The West has to take Russia into account in the Middle East, but will not become its strategic ally or even a partner in the foreseeable future. The West will maintain ties with Russia wherever it cannot do without them. It will make episodic attempts to isolate Moscow in other areas. The past year was marked by the unprecedented politicization of the Olympic and Paralympic Games.

Nevertheless, the year 2016 made the prospects of Russia’s diplomatic isolation appear even more hopeless, and highlighted the advantages that Russia has used in the past on a much smaller scale. Yes, Russia’s economic model and its role in the international division of labor give rise to many questions, and these are strategic issues. That said, Russia remains a player on practically all global issues, though it holds minority stakes in some areas. This means that it is simply impossible to reduce relations with Russia just to the Ukrainian issue, isolating it from all other problems. Moreover, the attempts to isolate Russia and subject it to more sanctions are inevitably making Russia essentially the main driver behind new international structures from which the West is either absent or exists as a marginal player, although the ideology of these structures is not anti-Western. Here China is Russia’s main partner. In the US view, China’s growth and rapprochement with Russia, which is far from a full-fledged military alliance, represent a challenge. US diplomacy may drive itself into a policy of double deterrence toward Moscow and Beijing. This risk became obvious in 2016 when problems emerged over disputed islands in the South China Sea.

Serious changes are taking place inside the collective West. The past year released the energy of social protest that had been accumulating for a long time in response to moderate election platforms and routine rhetoric from the entrenched establishment. Brexit and Donald Trump’s victory in the US presidential election became symbols of these changes. The referendum in Great Britain as such is not a serious threat to the European Union but the enormous collection of problems will compel the EU to revise its strategies and mechanisms. It is quite possible that the revision will be made in favor of the Brussels bureaucracy, leading to growing resistance on the part of member-countries. 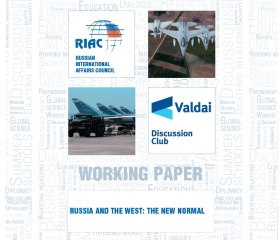 Ivan Timofeev:
Russia and the West: the New Normal

Trump’s victory in the US election will inevitably lead to a critical revision of Washington’s post-Cold War political legacy. Needless to say, his actions in the world arena will hardly correspond with his heated campaign rhetoric, but his future approach to China, European and Asian allies and prospects for dialogue with Russia are matters of serious debate. Trump’s victory opened a small window of opportunity for Russian-US relations, which would not have existed under Hillary Clinton. In this sense, 2016 has evoked hopes of improving ties with the United States and minimizing the fallout from their rupture. However, in all probability, relations are unlikely to improve dramatically in the next year.

The trends of the past few years continued to prevail in the Middle East in 2016. The first of them is the consolidation of the role of regional powers, primarily Iran and Turkey. The second trend is the ability of the Syrian army to achieve considerable success in the Russian-backed struggle against the radicals. Aleppo’s liberation demonstrated the resolve of Damascus and Moscow to achieve major strategic goals. The third trend is the difficulty of reaching political compromise on Syria. The prospects of a political settlement are vaguer than ever. The fourth trend is the spread of instability in the region and difficulties in resolving conflicts outside of Syria. It is telling that the world media barely report on the conflict in Yemen or complications in liberating Iraq’s Mosul from ISIS. In this chaotic environment Russia managed to deescalate tensions with Turkey in 2016. The assassination of the Russian ambassador in Ankara demonstrated vulnerability to terrorists but did not provoke a new round of tensions between Russia and Turkey.

No doubt, 2016 will be remembered for events in cyber space. US officials, including President Barack Obama, have made absurd claims that Russian hackers interfered in the US election on orders from President Vladimir Putin. The threats of reciprocal measures against Russia seem equally ridiculous, especially considering the absence of any evidence. But such scandals show that cyber space is becoming a major variable in the Russian-US security dilemma and an increasingly destabilizing factor.

The bottom line is that 2016 was characterized by a state of stable deterrence in which many powers, including Russia, already view one another as a strategic challenge or something close to it. For the time being stability is guaranteed by the reluctance of most states to spend too much on foreign policy, but this does not remove security risks that could lead to serious conflicts.