Depending on How You Slice It. Barack Obama’s visit to Japan

EPA/KIMIMASA…
EPA/KIMIMASA MAYAMA/Vostock Photo
US Presdent Barack Obama bids a farewell
to Japanese Prime Minister Shinzo Abe after
laying a wreath in front of a cenotaph in
Hiroshima. Japan, 27 May 2016
0
12380
Add Reader

Doctor of History, Head of the Department of Oriental Studies of the MGIMO University, RIAC expert

Obama’s visit to Hiroshima, his condemnation of war and nuclear weapons in general while refusing to apologize or meeting with hibakusha, opens this visit to a wide variety of interpretations, letting all “interested parties” see only what they want to see in it. Obama’s supporters in the United States will highlight the visit’s humanitarian and humane nature stemming from its anti-war and anti-nuclear message, while opponents will only see it as a new “round of apologies”.

The visit by US President Barack Obama to Hiroshima was unprecedented in many respects. Former President Jimmy Carter, out of office by then, visited the city in 1983, and US Ambassador to Japan John Roos was the first US official to visit he memorial to the victims of the A-bomb in 2010. Secretary of State John Kerry laid flowers at the monument to the victims at the same memorial in April 2016.

As to Barack Obama himself, in a May 2009 speech in Prague he expressed his desire to visit the sites of the nuclear bombings in the following manner: “The memories of Hiroshima and Nagasaki are etched in the minds of the world, and I would be honored to have the opportunity to visit those cities at some point during my presidency.”

Japan had been waiting for the US leader’s visit with a lot of anticipation. According to Japanese TV network NHK, 70% of the Japanese wanted Obama to come to Hiroshima, with only 2% of those polled against. It would be fair to assume that the Japanese were primarily expecting the US President to apologize for this barbaric and unprecedentedly cruel attack. Yet US Government representatives dashed those hopes from the very beginning. Deputy National Security Advisor Ben Rhodes said Obama would not “revisit the decision to use the atomic bomb.” White House Press Secretary Josh Ernest also said: “The President will pay a historic visit to Hiroshima, together with Prime Minister Abe to underline his commitment to a peaceful and safe world, free of nuclear weapons.”

The US administration wanted this visit to demonstrate Barack Obama’s commitment to a nuclear-free world for which he won the Nobel Prize in 2009.

Above all, the US administration wanted this visit to demonstrate Barack Obama’s commitment to a nuclear-free world for which he won the Nobel Prize in 2009. The revival of the international agenda of nuclear disarmament, which had fallen into a deep crisis by the early 2000s, has led to certain positive results, among which Obama’s supporters like to point out the New START treaty signed with Russia in 2010 and the 2016 nuclear deal with Iran. G7 foreign ministers called for an end to nuclear testing in April 2016.

Under those circumstances, one of the goals of Obama’s Hiroshima mission was to try and refocus international attention on the issues of nuclear disarmament. By acknowledging the abstract evil of nuclear weapons in general, without specific reference to what the Americans did in the summer of 1945, Obama was trying to solidify his propaganda-built image of a principled supporter of a nuclear-free world. Shaping up such an image would have considerable importance both to the departing US President, who is willing to go down in history as a “peace-keeper”, and to his Democratic Party as it gears up for the presidential election.

However, Obama’s critics were quick to point out that the world had not become a safer place during his presidency. The US–Russia disarmament talks have all but stalled as political relations between the two nations cooled, and the 2015 conference on nuclear non-proliferation was not even able to adopt a final document. Besides, the United States have proved powerless to stop North Korea’s missile and nuclear program that conducted several tests this year alone.

The Republicans are among Obama’s fiercest critics, as they leave no stone unturned in their search for reasons to “kick” him again and again for any of his failures in the international arena. This includes the nuclear realm. The Republicans question the success of the nuclear deal with Iran, claiming that it has been overblown, and presidential candidate Donald Trump, who thinks Obama’s idea of a nuclear-free world is a fantasy, has publicly called on Japan and South Korea to get nuclear weapons of their own to protect their security.

In this regard, the biggest problem Obama faces in an obvious contradiction between his abstract condemnation of nuclear weapons (directed to the present and the future) and what amounts to a justification of its use in the past. Case in point: his reluctance to give a clear moral and ethical assessment of President Truman’s 1945 decision to drop atomic bombs on Japan. It’s there that he, according to The New York Times, faces a “delicate rhetorical challenge”. 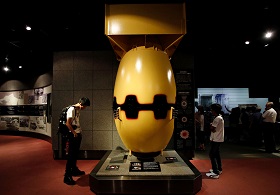 Japan itself is facing a difficult historical choice in light of Obama’s Hiroshima visit. After WWII, Tokyo has faced a “nuclear dilemma”: on the one hand, they have been paying lip service to nuclear disarmament and proclaimed the “three non-nuclear principles” of not possessing, not producing and not permitting the introduction of nuclear weapons, and on the other, they have relied on US nuclear guarantees for their national security. Besides, a public debate has been raging on and off inside Japan on the expedience and legality of a “nuclear option”, i.e. acquiring its own nuclear arsenal. This debate reached its peak in the 1960s, after Communist China conducted successful atomic bomb tests. The public and political discourse on the “nuclear option” has received a new impetus in recent years as territorial disputes with China in the East China Sea escalated and Japan became increasingly doubtful of the dependability of the US nuclear shield with regard to minuscule islands. Those doubts have persisted even despite official US assurances of the American intentions to defend the Senkaku Islands with all available means.

In any case, whether it’s the US nuclear shield or their own, the official Tokyo believes there is no alternative to nuclear weapons. Hence an opinion being expressed in Japan that had Obama apologized for the atomic bombing during his visit to Hiroshima, the Japanese government would have been put in a bind. That’s why “Obama’s silence” in this regard serves the interests not only of the Americans but of the Japanese too.

Whether it’s the US nuclear shield or their own, the official Tokyo believes there is no alternative to nuclear weapons.

Another important topic raised by Obama’s visit to Hiroshima is Japan’s responsibility for its aggressive policy at the time of the war in the Pacific. Despite profuse apologies offered by Japanese officials, neighboring countries that fell victim to that policy have continued challenging Tokyo on its “insufficient” acknowledgment of responsibility for the aggression. In this regard, some observers view Obama’s visit as a way to put pressure on Japan to make it repent once again and thus take the edge out of Tokyo’s relations with the region’s key nations – China, South Korea and South-East Asian countries. According to Washington, normalization of political relations with those countries would help Japan raise its international profile in the region and strengthen its military and political alliance with the United States. This, in turn, would expand the regional capabilities of the United States itself, whose military policy towards East Asia has been increasingly shifting away from the “hub and spokes” concept to networked security systems in recent years. The signal being sent to Japan is that by visiting Hiroshima and being criticized by his own conservative constituents at home for “betraying the memory of war veterans”, Obama is greatly suffering domestically, inviting Japan to behave the same way for the sake of their union and to show more flexibility towards its East Asian neighbors. 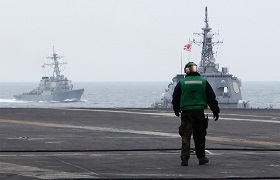 Yet Japan is having a hard time accepting this logic. If anything, the notion that there have been enough apologies for the past and that the subject of the war should best be left to historians is much more popular there. Prime Minister Shinzo Abe clearly stated the new approach in his address commemorating the 60th anniversary of the end of WWII on August 15, 2015: “We must not let our children, grandchildren, and even further generations to come, who have nothing to do with that war, be predestined to apologize.” Hiroshima Mayor Kazumi Matsui echoed this sentiment by saying: “We naturally have feelings to pursue responsibility. But it was 70 years ago, and the next generation has to overcome the past.”

Obama’s visit to Hiroshima, his condemnation of war and nuclear weapons in general while refusing to apologize or meeting with hibakusha, opens this visit to a wide variety of interpretations, letting all “interested parties” see only what they want to see in it. Obama’s supporters in the United States will highlight the visit’s humanitarian and humane nature stemming from its anti-war and anti-nuclear message, while opponents will only see it as a new “round of apologies” and will find a new reason to criticize the US President for not standing his ground and being “weak”. In Japan, nationalists will apparently focus on the fact that Obama came to Hiroshima at all, which, in their view, suggests that the President has “bowed” to the bombing’s victims and thus acknowledged, though non-verbally, the United States’ guilt before the people of Japan. Pacifists will see the visit as yet another confirmation of the rightfulness of Japan’s post-war policy of refusing to have armed forces and pursuing nuclear disarmament. Pragmatists will assess Obama’s visit in positive terms as a step towards the strengthening of strategic relations between Tokyo and Washington in the face of the Chinese and North Korean challenges. For East Asian capitals that are mostly critical of Japan, Obama’s tour of Hiroshima complete with an abstract condemnation of war and without a clear message about Japan’s responsibility for its past actions will only present a fresh reason to renew propaganda attacks on Tokyo for resurrecting nationalism and militarism.