The latest meeting of the Valdai Discussion Club (its 12th) took place in Sochi. As always, the participants talked about a wide range of issues in contemporary international life, arguing about recent – and not so recent – history, about Russia and the West, and about the state of world civilization as a whole and its development trends. Yet the central issue on the agenda was Syria, namely, the prospects for resolving the situation in the country and the role of Russia and the international community in its affairs. And recent events – Russian air strikes on Islamic terrorist positions, the unexpected visit of the Syrian leader Bashar al-Assad to Moscow and the sharp increase of diplomatic activity surrounding the Syrian crisis – made the meeting all the more relevant.

The latest meeting of the Valdai Discussion Club (its 12th) took place in Sochi. As always, the participants talked about a wide range of issues in contemporary international life, arguing about recent – and not so recent – history, about Russia and the West, and about the state of world civilization as a whole and its development trends. Yet the central issue on the agenda was Syria, namely, the prospects for resolving the situation in the country and the role of Russia and the international community in its affairs. And recent events – Russian air strikes on Islamic terrorist positions, the unexpected visit of the Syrian leader Bashar al-Assad to Moscow and the sharp increase of diplomatic activity surrounding the Syrian crisis – made the meeting all the more relevant.

Speaking at the Valdai Discussion Club, President of the Russian Federation Vladimir Putin elaborated on his vision of settling the Syrian crisis. And this vision appears to reflect Russia’s overall approach to creating a new world order. It has to be said that against the backdrop of the numerous declarative, ambiguous and at times contradictory statements that our Western partners have made with regard to Syria, Vladimir Putin’s words were to-the-point, logical and consistent. There is no reticence in Russia’s position, no omissions or gaps; you can argue with it, not agree with it, add to it or even amend it. But the one thing you cannot do is ignore it. Let us try and summarize the main points of “Putin’s Plan” as he presented it at the Valdai Club.

1. First of all, the Russian President underscored the need to preserve Syrian statehood, to fully restore the country’s sovereignty and territorial integrity. This is the indispensable basis for all subsequent steps. It is no secret that a number of proposals have been circulating of late on how to divide Syria up – according to religious, ethnic or political persuasions. It does not take a genius to work out that this will lead to the creation of several mini-states on Syrian territory, all of which will be burdened with their own set of political and economic problems. These states will be in confrontation with each other, becoming easy targets for manipulation from the outside. Dividing Syria up is not a solution to the crisis. On the contrary, it will take the crisis to an even more dangerous level.

2. In his speech, Vladimir Putin also noted that the immediate task should not be to divide Syria up at the behest of some outside force, but rather to create conditions under which the Syrian people can decide their own future. This is Russia’s central position, and it is based on the belief that a construction forced upon the country from the outside will never be stable or lasting, no matter who imposed it – neighbouring states or global superpowers.

3. Does this mean, then, that the international community should simply withdraw from the situation in Syria? Of course not. The four-and-a-half-year civil war has long since ceased to be a purely internal matter of the Syrian people. It has, in one way or another, drawn neighbouring states, other Middle Eastern countries and the global community into the bloody affair. And the newest actor in the conflict, the Islamic State, poses a direct threat, not only to Syria, but to the whole world. 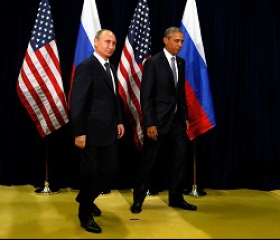 REUTERS/Kevin Lamarque
Igor Ivanov:
Russia-U.S. Relations. Is There Any Light
at the End of the Tunnel?

This is why the President of the Russian Federation once again urged the international community to combine its efforts, first and foremost, against the Islamic State and other international terrorist groups. There should be no room for other motivations and objectives in this war against a common enemy. We should not be trying to influence the future political structure of Syria or carve ourselves some kind of special sphere of influence in the country. The joint war effort should not become a pretext for interfering in the internal affairs of a sovereign state. If this condition is not met, then we will not be able to achieve the levels of trust needed among the key players. And this means that the war against our common, and very dangerous, enemy will very likely be ineffective.

4. One more circumstance that greatly influences the need to mobilize the international community to resolve the Syrian crisis is the fact that it cannot be separated from the other issues in the Middle East and Northern Africa. Ever since the first revolutions of the so-called Arab Spring, or perhaps since the military intervention of the United States and its allies in Iraq, the region has been mired in a process of fundamental change, coupled with periodic outbreaks of instability and armed conflicts – in Iraq, Libya and Yemen, for example. Long-standing problems, the Arab–Israel conflict in particular, are getting worse.

But we are not here to point fingers at those who may be responsible for these negative trends. It is far more important to be cognizant of the fact that we are dealing with a profound systemic crisis at the regional level. And it is hard for us to imagine now the devastating effects that this crisis could have as we move forward. What is clear is that these consequences will spread beyond the Middle East and Northern Africa and, one way or another, affect international relations at the global level. If this is the case, then we have to respond at the global level. It is high time that we started talking about setting up a completely new regional security system in the Middle East, one that would work under guarantees from the United Nations.

5. In his speech, Vladimir Putin talked about the need to combine our efforts to solve the problems of the post-war social and economic reconstruction of Syria. The scale of the task is so massive that the Syrian people will not be able to do it alone. We need to consolidate the efforts of neighbouring countries, international organizations, financial institutions, private business and NGOs. We can only welcome the European Union’s increased diplomatic efforts with regard to Syria in recent months, especially as failure to resolve the crisis and fully restore Syrian statehood will do almost nothing to ease the current migration pressure on European states.

The Russian leader’s proposals on how to resolve the Syrian crisis are, as we noted earlier, concrete and connected to the specific features of the conflict itself. But at the same time they are also universal, reflecting Russia’s approach to global politics as a whole and practicable in other crisis situations. The Ukrainian crisis is a good example. 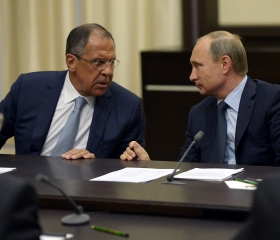 Preserving Ukrainian sovereignty is a task of paramount importance, just as it is with the Syrian crisis. Any attempts to divide Ukraine up are just as unacceptable as attempts to divide Syria are. Ukraine’s future must be decided by the Ukrainian people – by those in the east and the west of the country, by those who support the current Kiev government and those who oppose it. External forces must stop trying to get Ukraine on their side, to further aggravate the conflict. They need to stop showing support for the more radical groups on both sides. Just like in the case of Syria, the role of the international community should include multifaceted involvement in the socioeconomic revival of Ukraine once the most urgent political problems have been resolved.

Of course, there will always be significant differences in how Russia and the West view the futures of Syria and Ukraine. It is also clear that the interests of foreign forces involved in the Syrian and Ukrainian – and in any other regional crisis, for that matter – will never dovetail one hundred per cent. Differences in assessments of the situation, in determining the best ways to improve it and in how to divide the functions among external players – all these are, were and always will be additional factors that only complicate the situation. And they should never be underestimated. But these factors, as Vladimir Putin stressed, should not get in the way of bilateral and multilateral cooperation. If, of course, the aim of this cooperation is to resolve issues and not impose one’s view on the other partners.

For the many critics of Russia’s Valdai Club proposals on Syria I have one simple question: What alternative ideas and plans do you propose? And what experience do you have in resolving delicate crisis situations? Maybe you should pay more attention to what Moscow is suggesting. Of course, understanding does not mean automatic and unconditional support for Russia’s proposals, but it does suggest, at the very least, a willingness to engage in serious and meaningful dialogue. Without dialogue, we cannot hope to successfully resolve international crises, much less build the new world order together.

Rate this article
Share this article
FOLLOW THE LATEST DEVELOPMENTS
Project
Security System in the Middle East
Tags
Russia, Syria, Valdai Club, West, World order, Vladimir Putin
Reader's choice
HideShow
The Distributed World
Does Syria’s Road Back to the Arab Family Go Through the UAE?
Unprecedented Sanctions? By No Means
Sanctions and the Confiscation of Russian Property. The First Experience
Asia, Eurasia and the European Crisis: Results of 2022