Early in 2013, Ukraine is again facing a difficult choice of integration strategies. In fact, the European Union, which Ukraine has been so eager to join is undergoing a severe economic crisis, while the Common Economic Space – Customs Union (CES-CU) is gaining strength even in these economically tough times. The overall historical and political context suggests that Kiev will again fail to choose a clear trajectory. However, the preference, albeit declarative, that Ukraine displays in its approach to integration holds clear significance.

Early in 2013, Ukraine is again facing a difficult choice of integration strategies. In fact, the European Union, which Ukraine has been so eager to join is undergoing a severe economic crisis, while the Common Economic Space – Customs Union (CES-CU) is gaining strength even in these economically tough times. The overall historical and political context suggests that Kiev will again fail to choose a clear trajectory. However, the preference, albeit declarative, that Ukraine displays in its approach to integration holds clear significance.

On February 25, leaders of Ukraine and the EU are to meet in Brussels, which is a truly notable event as President Victor Yanukovich had postponed his visit to Moscow in late last December. The parties are to discuss feasible steps toward Eurointegration for Ukraine, the largest country within Europe, which also has one of the largest populations of any European country.

Now, in the early 21st century, Ukraine is receiving a potent integration stimulus from the CES-CU, while also insisting on its own adherence to the European trajectory. This has produced a society that finds itself engaged in an animated discussion on the pros and cons of these different integration projects.

At the same time, Ukraine is still welcome in the Eurasian Economic Union (EEU), which is slated to be established in 2015, while the one-year-old CES-CU is an interim entity that includes Russia, Belarus and Kazakhstan, has a total population of 170 million, and functions like a kind of common market for goods, capital and labor that has a single customs and tariff policy. The union proclaims to have an open-door policy, primarily for Ukraine, whose transportation, energy and other infrastructures are still tightly linked to both nearby Russia and Belarus and distant Kazakhstan. 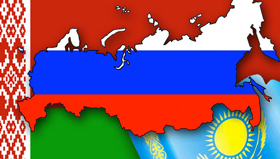 Geared at fewer political commitments with higher quality economic ties, the CES-CU project is not problem-free. Decisions involve dozens and sometimes hundreds of approvals (although the EU seems to require more). Members’ mutual recognition of each other’s economic and political clout proves problematic, as does the creation and adjustment of the decision-making and implementation mechanisms. Nevertheless, the CES-CU is gaining ground, and not only in Eurasia. Its mutual trade turnover in monetary terms grew by 21 percent in 2010, and by 32 percent in 2011, with no drop in 2012. The creation of three international transport corridors is underway, i.e. West Europe – Western China, North – South, and West – East, with eight logistical centers in operation and 37 more to be built by 2020. Established in 2006, the Eurasian Development Bank is making progress, with the total investment in the Eurasian Economic Community currently standing at over 3.9 billion dollars. The RAS Institute for Economic Forecasting believes that, given the macroeconomic effect, the CES-CU should add at least an additional 5 percent to GDP in 5 years’ time, and up to 15 percent in 10 years.

Against the backdrop of the EU’s woes, the CES-CU’s global attractiveness is definitely on the rise, as can be deduced not just from statements made by politicians in member-states, but also from Hillary Clinton's warning of the Sovietization threat in the region.

Ukraine's final step toward Eurointegration is being delayed by the EU crisis and poor outlook for the development of bilateral economic relations.

In early 2013, Ukraine will again face this integration dilemma. However, it remains unclear whether the country will finally make a decision or whether it will remain split on this issue – whether it picks a track or continues with this “double-track” approach. Whatever the answer, the integration priority chosen, even if it remains rhetorical, is still significant.

The Problem of Choice in Ukrainian History

It can be argued that, in its history, Ukraine faced four crucial choices. 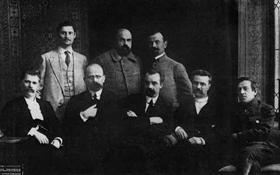 Choice number one was that of faith, and civilization, made by Prince Vladimir to convert Kievan Rus to Orthodox Christianity. Choice number two involved the selection of allies, as on January 18, 1654, Bogdan Khmelnitsky rejected the claims for unions with Catholic Poland, the Islamic Crimean Khanate and Sultan-ruled Turkey in favor of joining forces with Russia.

In 1918-1919, upon proclaiming an "independent, free and sovereign state of the Ukrainian people" in its Fourth Universal (quasi-constitution), Ukraine first backed the German occupational forces and the Entente, before changing its allegiance and backing the new Soviet state [1].

Finally, in 1991 Ukraine left the Union of Soviet Republics, in favor of sovereignty and a move toward Europe. At the March 17 referendum on the preservation of the USSR, 70.5 percent (or 62.1 percent of the electorate) including over 80 percent of residents in the Khmelnitsky, Zhitomir, Vinnitsa, Kirovograd, Cherkassy, Odessa, Crimea, Kherson, Donetsk and Lugansk regions, 44.6 percent in Kiev and at least 20 percent in the Ivano-Frankovsk, Lvov and Ternopol regions voted to stay. But in less than nine months’ time, the Ukrainian referendum produced the opposite results and independence was supported by 90.85 percent (76.7 percent of the electorate), among them 54.2 percent in the Crimea and 57 percent in the “city of Russian glory” Sevastopol, home to majority Russian-speaking residents [2]. Until today, these pivotal decisions have each, to varying degrees, played a role in Ukraine’s selection of integration projects that encompasses practically all countries within the globalization process.

The Price of Integration

Now, in the early 21st century, Ukraine is receiving a potent integration stimulus from the CES-CU, while also insisting on its own adherence to the European trajectory. 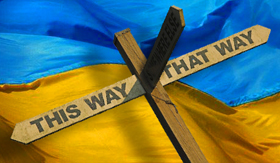 This has produced a society that finds itself engaged in an animated discussion on the pros and cons of these different integration projects. Different segments of the Ukrainian political elite and electorate rightly raise questions about the final destination, and fall back on useful clichés like “a bird in the hand is worth two in the bush.”

On the one hand, the emergent EEU will bring steady economic activity over a relatively broad geopolitical space. The union is sure to attract other states, if member-countries’ economies show proper development.

On the other hand, Ukraine's final step toward Eurointegration is being delayed by the EU crisis and poor outlook for the development of bilateral economic relations. However, Europe’s plight is sure to end some day, and there is ground to believe that, after these misfortunes have passed, the EU’s structures will be both more resilient and more appealing. There is no doubt that Kiev would like to pursue the European track. But even if the EU recovers and prospers, would it wish to take on a poorer Ukraine? This question remains open, with the likely answers mostly being negative. The Bulgarian and Romanian integration experience is unlikely to convince people otherwise.

Hesitation over this issue is also rooted in the destructive prejudices that the country will either never ally with Russia or that it is doomed to the alliance.

At the same time, the EU precedent proves the viability of CES-CU-style associations. Why not seize this chance while the ties with its members are more or less intact?

The uncertainty is aggravated by budget troubles. According to Bogdan Vovk's article titled "Out of the Union toward Greece", in 2010-2011 the Ukrainian economy was growing at 4-5 percent mainly thanks to Western loans, which in 2002-2008 amounted to about 100 billion dollars. As soon as this inflow stopped, troubles started. The 2012 budget was executed through external and domestic credits totaling about 12.5 billion dollars. In 2013, borrowing of 17-billion-dollars is expected, including 4 billion in Eurobonds. The 2013 budget of 45 billion dollars envisages 14.5 billion towards debt repayment, with these amounts tending to grow. This means that situation is likely to deteriorate, with the Greek scenario looming on the horizon. According to a consensus forecast by the Ukrainian Ministry for Economic Development, the national currency exchange rate is also under threat: during 2013, the hryvna rate should make 8.3-9.0 to the dollar, while by mid-January the rate was at 8.17. Should the trend continue, neither the EU nor the CES-CU nor even their combined efforts will be enough to bail out the Ukrainian economy.

Hesitation over this issue is also rooted in the destructive prejudices that the country will either never ally with Russia or that it is doomed to the alliance. Notably, this latter is largely based on Ukraine's perceived weakness and dependence. Even if this were the case, Ukrainians from all regions would overwhelmingly jump aboard, as research dating back 15 years (but which is still relevant) carried out with Dmitry Furman [2] indicates 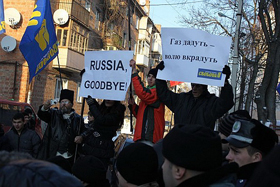 In Search of an Answer: From Chernovtsy to Brussels

The choice Ukraine faces in 2013 is different from all the previous crucial decisions that the country has faced, and also from the dilemmas sparked by the, now annual phenomenon known as the “gas war.” Uncertainty over the European and Eurasian directions means that, in the short and medium term, Ukraine will remain stuck straddling two horses, even if Kiev announces its integration path. This is not about political slyness but about the incomplete ethnic and state identity resulting from the inherited disparity between Ukraine’s western, central and eastern regions. For one, the westerners' political clout is too great given its slim economic potential.

If a new configuration between Russia and Europe emerges, or between the EU and the CES-CU and later the EEU, this split could grow into a bridge for multi-vector dynamic development that benefits Ukraine, whose uncertainties would shift from threat to hope.

Addressing university students in Chernovtsy, an Old Russian and new European city, Russian Foreign Minister Sergey Lavrov said: "We are truly convinced that our nearest neighbors should not be made to forcibly choose between the Western and the Eastern vectors. Integration processes on the continent – both within the EU and Eurasian formats – are going ahead along the same rules, which necessitate the promotion of the obvious trend toward their coupling but not opposing. We use this approach to regard Eurasian integration as our material contribution in the creation of a single economic and human space from the Atlantic to the Pacific…".

In spite of Mr. Lavrov's encouragement, we expect Ukraine's indecision to worsen due to the ongoing trends resulting from the unstable choices of the past and the unbalanced structure of political and economic priorities over the country’s regions.

1. Lysyak-Rudnitsky. The Fourth Universal and its Historical Predecessors // Between History and Politics. Moscow, St. Petersburg. 2007, p. 389

Rate this article
Share this article
FOLLOW THE LATEST DEVELOPMENTS
Project
New Eastern Europe: Analysis of the Situation and Strategic Position of Russia in Central and Eastern Europe, the Baltic, and European Part of the Post-Soviet Space
Tags
Russia, European Union, Ukraine, Customs Union
Reader's choice
HideShow
Stanley R. Sloan: A New U.S. Administration Will Have Much Work to Do in Rebuilding European Faith in American Leadership
How the Pandemic Will Change EU-Russian Relations
The World after START
Recommendations for American Policy and Priorities Towards Russia
The Third Neighbor: Can America Live With Putin's Russia?