The project on creating a gas corridor from Russia to Iran through the territory of Azerbaijan became the main outcome of the trilateral negotiations. Its successful implementation combined with the launch of the North-South transportation corridor can increase the importance of this trilateral cooperation.

Russia and Iran continue to search for an economic base to strengthen cooperation, though new projects are still at the stage of preliminary agreements. At the same time, the remaining contradictions in Syria do not affect the fact that Moscow and Tehran remain indispensable partners in this area. 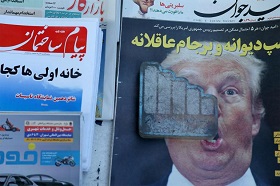 Vladimir Putin’s visit to Tehran on November 1, 2017, was held in connection with a trilateral meeting of the leaders of Russia, Iran, and Azerbaijan. The politicians met up in this format in August 2016 for the first time. At that time, the format was considered successful, and the parties agreed to hold similar meetings on a regular basis.

Despite the usual positive feedback from participants on the trilateral dialog, the negotiation format proved to have a number of natural limitations. In fact, it was created around one specific logistics project — the North-South transportation corridor. Not surprisingly, it was the major topic of the trilateral meeting. The rest of the content is an attempt to make the existing framework of negotiations more constructive. This time, logistics was discussed along with transport issues, countering terrorism, trade and energy, as well as with the legal status of the Caspian. To resolve the latter issue, by the way, the trilateral format is not enough, even under the most positive scenario, since Kazakhstan and Turkmenistan also claim their right for Caspian resources.

It should not be forgotten that in the Russia-Iran-Azerbaijan trio the last participant obviously loses to the other two in both political and economic power. For geographic reasons, Baku in this cooperation acts more as an indispensable intermediary between Tehran and Moscow, in their energy and logistics projects. At the same time, the Azerbaijani side is quite happy with this situation at the current stage, as this makes it possible to obtain additional sources of income as a transit country. Moreover, Armenia as the main rival of Azerbaijan pretends to play a similar role, though with obviously less success.

Perhaps the main innovation of the trilateral negotiations was the project to create a gas corridor from Russia to Iran through the territory of Azerbaijan. It is difficult to call this result a breakthrough, but the successful implementation of the new project combined with the launch of the North-South transportation corridor might increase the importance of this trilateral cooperation.

For geographic reasons, Baku in this cooperation acts more as an indispensable intermediary between Tehran and Moscow, in their energy and logistics projects.

From the outset, the attention of external observers focused on the interaction between Iran and Russia in the course of the negotiations in Tehran. This meeting was the tenth for Vladimir Putin and Hassan Rouhani as they had previously met at different venues. The intensity of contacts emphasizes the political will to develop relations between the countries at the highest level. The negotiations were held in a friendly tone with positive assessments of bilateral cooperation. At the same time, the significance of the meeting was intensified by a number of previous events.

Vladimir Putin visited Iran after the U.S. had announced a new strategy towards the Islamic Republic on October 13 casting doubt on the results of the "nuclear deal" and points out Washington's intentions to seek a change in Tehran's policy in the region. At the same time, V. Putin, assessing the interaction between Moscow and Tehran on the nuclear issue and in the area of the Syrian conflict resolution, noted the effectiveness of cooperation between Russia and Iran. In other words, the last meeting can be regarded as Moscow's response to Washington's threats against Iran.

The feeling that Iran and Russia are in the same sanctions boat appeared in 2014 after the accession of the Crimea. As the U.S. pressure increased, the consolidation of the sides based on the counteraction to Washington only intensified. An attempt to bring collective anti-Americanism to a new level can be seen in the statement made by the main conservative and the most influential person in the Islamic Republic, Rahbar Ali Khamenei. In the course of the meeting with Vladimir Putin he suggested to jointly "isolate the Americans" by completely eliminating the U.S. dollar and replacing it with national currencies in international transactions.

The last meeting can be regarded as Moscow's response to Washington's threats against Iran.

The very idea to isolate the U.S. looks like a rhetorical strategy aimed at the local audience in Iran. However, judging by Putin’s statements, the initiative to switch to the national currency in mutual financial settlements fully meets the interests of the countries.

In addition to countering the U.S., the meeting in Tehran may look like a response to yet another event. On October 30, the Baku-Tbilisi-Kars railway was officially opened, and it should become part of the new "Silk Road" to connect China with Europe. This route is not viewed as a immediate competitor of the North-South transportation corridor, but still it is an alternative logistics project that is implemented without Russia’s participation. 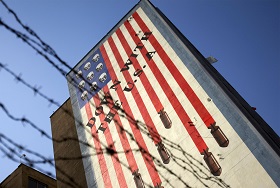 Irina Fedorova:
Hypertension between Iran and the USA

Russia and Iran have become indispensable political and military partners in the Syrian war, which is accompanied by an unprecedented, in recent history, amount of military contacts and information exchange. Both sides agree that this "marriage of convenience" that arose with the need to fight against common threats in Syria, should be extended. The countries need each other, which is confirmed in the statements made in Tehran. However, the negotiations also reveal certain contradictions between Russia and Iran in this area.

The emerging information, combined with official statements in Tehran, suggests that today Moscow is seeking to reduce the military presence in Syria and move on to finding a political solution to the conflict. At the same time, Ali Khamenei's statement, made during the conversation with Vladimir Putin, contains the following message: Iran does not believe that the war is coming to an end. Therefore, it is unlikely that Iran will support the reduction of Russian troops from Syria.

Iran benefits from the defeat of the "Islamic state", as the Iranians are gradually filling the emerging vacuum in Iraq and Syria. Tehran's influence in the region is growing. And the main menace to it is the position of the U.S. and its allies, who will not allow the Islamic Republic to maintain its current position. In this regard, there is growing excitement about possible negotiations between Russia and Washington on the settlement of Syrian issues.

Both sides agree that this "marriage of convenience" that arose with the need to fight against common threats in Syria, should be extended.

The intensity of Russian-Iranian contacts, as well as many joint projects, confirms that both sides are well aware of the need to develop bilateral economic ties. The long-term cooperation between Iran and Russia cannot be built on the common interests in Syria and anti-Americanism only.

The past negotiations showed that Moscow and Tehran are trying to put stakes on the development of projects in the energy sector. In addition to the gas corridor mentioned, the news that "Rosneft" and NIOC, the Iranian national oil company, signed a roadmap for strategic projects in the area of oil and gas production in Iran with a total investment of up to USD 30 billion was a major event in the Tehran negotiations.

However, it is premature to expect an early effect from this agreement. Almost all Russian oil companies have been showing interest in Iran for several years already. The economic conditions of future contracts and their practical implementation remain the key issue. As a result, at the moment, this cooperation is limited to signing non-binding memorandum of intentions that will not lead to real consequences.

The long-term cooperation between Iran and Russia cannot be built on the common interests in Syria and anti-Americanism only.

On the whole, in order to assess the economic interaction between the two countries, one can point out positive developments in recent years. In 2016, the trade turnover between Iran and Russia doubled compared to 2015 and reached USD 2.2 billion. Despite this, the current volume of trade clearly does not match the size of the economy of the two countries and it even did not reach the level of 2010-2011 estimated at USD 3.6-3.7 billion. Moreover, judging by the current dynamics, in 2017 the situation will not fundamentally change. The government departments of both countries are trying to work in this direction, creating large-scale projects for the development of economic cooperation. The continuation of this trend could be observed in the course of Tehran negotiations.

As a rule, large projects with the support of state structures depend on additional funding. Both countries are facing currency shortage. Therefore, only a small part of the projects receives government loans and then passes into the category of firm contracts. 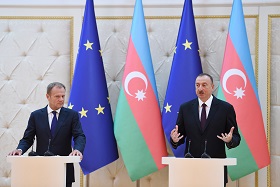 Sergey Minasyan:
Hard Times for Multivectorism in Post-Soviet Space: Azerbaijan between Russia and the West

The main difficulty for expanding economic cooperation between Russia and Iran is that countries cannot offer so many modes of production able to compete in the global market. In addition, the development of economic relations is hampered by the problems of performing bank transactions between Russian and Iranian contractors, by the inflated transport costs due to the lack of modern logistics, bureaucratic obstacles, and corruption. All these problems cannot be solved in the short term.

Rate this article
Share this article
FOLLOW THE LATEST DEVELOPMENTS
Project
Security System in the Middle East
Related materials
Hard Times for Multivectorism in Post-Soviet Space: Azerbaijan between Russia and the West Hypertension between Iran and the USA

What Will the Washington—Tehran Psychological Warfare Bring?

With the numerous unresolved issues between Iran and the Unites States, any normalization of bilateral relations would require both political will and a large-scale settlement plan