The working papers offer a detailed analysis of the cooperation between Russia and Iran in the economic arena as well. The authors note the decreasing level of trade in recent years; the limited range of goods traded; and projects abandoned, and major companies exiting Iran, together with a dramatic reduction in the proportion of services in trade.

RIAC's team of experts has prepared an analysis of current Russian-Iranian relations in order to identify factors which facilitate collaboration, to highlight reasons that might constrain or impede bilateral relations, and to assess prospects for future cooperation.

There are good reasons today for the choice of subject matter. Russian-Iranian relations go back centuries, with the territorial proximity of the two countries acting as a key factor promoting desires to build engagement. Although since 1991 they no longer share a common border, the two countries continue to regard each other as neighbours and regional partners facing common challenges. There is no reason to doubt that, for today and into the future, Iran will remain a crucial influence on Russia’s policy in the region. Maintaining and expanding relations with Iran should be considered one of the ways of sustaining Russia’s national interest: without taking proper account of the position of such a large neighbour and auspicious regional player, Russia will find it hard to sustain its influence across the neighbouring countries in the Caucasus and Central Asia or in the Middle East.

The authors analyse common geopolitical interests and the economic potential of the two countries in detail, laying out the foundation for a more in-depth relationship. In the meantime, as has been stated with good reason in the paper, this potential today is far from being exploited fully.

Addressing the question why neither of the two countries has been satisfied with the level of bilateral ties, the authors considered both external and internal factors driving their bilateral relationship. They offer an extensive analysis of the most topical issue, Iran’s nuclear programme and international sanctions, and the positive role that Russia plays in resolving this problem. The papers give consideration also to the influence of various international and regional players, in particular, the US, Arab states and China, on the Russian-Iranian relationship.

The working papers offer a detailed analysis of the cooperation between Russia and Iran in the economic arena as well. The authors note the decreasing level of trade in recent years; the limited range of goods traded; and projects abandoned, and major companies exiting Iran, together with a dramatic reduction in the proportion of services in trade.

The key reason for the decreasing economic cooperation is believed to be the “financial and economic crisis in Iran caused … by international sanctions”. Iran, as a result, “has turned into a zone unfavourable for business”. However, with shifts in Iran’s foreign policies as its new government seeks to find a solution to the nuclear programme issue, get sanctions removed and relax tension with the West, some positive improvements might be on the horizon for Iran’s industries and human and other resources, that could help facilitate its transformation into a regional superpower. With such a large country in its neighbourhood, Russia should do its best to build on the good-neighbourly potential. The authors stress repeatedly that it is crucially important not to waste any time and start immediately intensifying foreign economic contacts, because, as sanctions are removed, “competition for Iran” is expected to kick in. 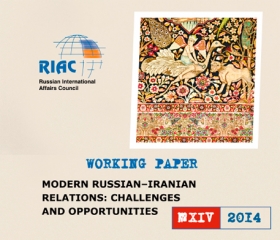 Although at present “Russia has few strong, competitive opportunities in Iran’s markets” (which is shown in the paper) and while there are obstacles to growing business ties between Russian and Iran, the authors highlight a number of specific areas where the dialogue and cooperation are possible. The most exciting one is infrastructure development in both the two countries and in third party countries. Such infrastructure development is needed in oil and gas recovery and transportation; international transport corridors; all modes of transportation and transit of national and international freight.

Russia can expect Iran to become a sizeable consumer of its capital goods, investment and technologies. Joint efforts in these and other niches could be extremely beneficial for both Russia and Iran. There are still attractive prospects for both countries in such traditional domains as military technical cooperation, electricity generation (including nuclear energy), and aerospace, but also geologic prospecting, water management, and supplies of Russian metals, materials and equipment, paper and cereals. There are also good prospects for economic cooperation at the level of the region (Russia’s southern regions, Dagestan, Tatarstan and Iran’s ostanas) and through joint agricultural projects. There are opportunities for contacts and links through regional institutions of cooperation in the Caspian or the Shanghai Cooperation Organisations.

The authors also list a range of high-tech goods that may experience high demand on Iranian markets.

They offer specific recommendations on how to facilitate the entry of Russian businesses, in particular small and medium-sized ones, into Iranian markets. The findings in the paper are well substantiated. The authors point to the necessity of drafting a comprehensive programme of cooperation between Russia and Iran.

One might agree with the authors that Russia and Iran can expand their economic cooperation across various areas and, given the expressed political will, collaboration between the two countries can be broadened significantly.

The papers offer a variety of views on the prospects for the two countries. They argue that intergovernmental links can be promoted in ways that are described as “cautious partnership”, “pragmatic partnership” or even “privileged partnership”. Several scenarios are offered based on the described approaches. Although the paper is silent on the reasons for opting for one or another scenario, the authors believe that “it is time to put into effect such scenarios that are based not on geopolitical projects but rather on status and technological cooperation”, for which is needed is “an effective dialogue with the outside world, as part of regional integration.”

The expert analysis of the status of Russian-Iranian relations may prove of interest for institutions engaged in foreign economic transactions, for specialists working with Iran, and for business people looking for new opportunities.

It is hard to argue that a comprehensive analysis into potentially broader relations between Russia and Iran needs deeper insights. The working papers’ format could have restrained the authors and kept them away from more detailed research into a whole range of factors that affect the bilateral relationship, and into the distinct nature of this relationship. 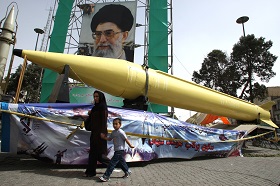 More attention could be given to the changing dynamics of geopolitical processes and the latest world trends that are having such a strong impact on both the political and economic environment in which all global economic entities, including Russia and Iran, function.

It can be argued that, within the framework of the chosen subject, more can be done to analyse the current economic situation in Iran. Because of the lack of reliable statistics in Iran during the administration of Mahmoud Ahmadinejad, the data cited, even if borrowed from international sources, cannot fully reflect reality. More thought should be given to export possibilities available to Iranian industries.

Issues affecting the assessment of internal political processes in the two countries deserve closer attention. The working papers reduce the entire government structure in Iran exclusively to the vali-e faghih-e iran ignoring other elements of the political machine which are tangibly present in the country’s political life and have certain effects on decision-making.

It would be more appropriate to attempt a deeper analysis of the obstacles impeding broader cooperation between the two countries, which are rooted in the political, social, mental or ideological spheres.

One recommendation would be to try and understand why Iranian elites often stress that Russia is an unreliable partner, while Russia’s policy towards Iran is believed to be derivative from Russian-US relations, and why they blame Russia for insincere attitudes and Iran’s younger generations are becoming more and more antagonistic towards Russia.

It may be appropriate to draw on the works by Iranian experts on international relations for a better understanding of processes at work in Iranian society and its mentality when judging external partners or enemies. The lack of references to Iranian sources and literature undermines the significance of the paper, which otherwise could be perceived as somewhat well substantiated.

More focus should be given to the study of the missing element of culture and its diverse effects within the total array of relations between the two countries. The paper would benefit from recommendations on a range of steps to promote Russia’s positive image in Iran, without which it will be impossible to expand bilateral non-governmental relations.

Thanks to the specific format of the analysis - working papers – the authors could expand the book by adding more papers not related directly to the main text’s ideas. The materials on Iran’s nuclear programme and details of the talks or Iran’s regional policies may be of certain interest, but they are often overburdened with facts, and divert the reader from the topic of the ongoing cooperation between the two countries. Some judgments on the role of Iran in the region are too categorical and fail to take into account new developments in Iran’s foreign policy after Hassan Rouhani has come to power, or constant changes in the regional situation, pertaining largely to Ahmadinejad’s presidency.

Overall, the working papers give an adequate impression of the subject matter but at the same time, the topic is far from being exhausted and should be supplemented with follow-up research reflecting the rapidly changing international and regional environment.

Rate this article
Share this article
FOLLOW THE LATEST DEVELOPMENTS
Project
Russia-Iran Relations on the Modern Stage
Tags
Russia, Iran, Review
Reader's choice
HideShow
Russia Moves East, India West, Straining Ties
Arms Control Is to Be Maintained and Invigorated at All Costs
Should China and Russia Form an Alliance?
Non-state actors in the Middle East: towards a new typology
Russia-2020: Summing Up the Track-Record