REUTERS/Sergio Moraes A…
REUTERS/Sergio
Moraes A laid-off outsourced worker, who was
contracted to work for Petrobras, wears a mask
of former Brazilian president Luiz Inacio Lula
da Silva during a protest against recent layoffs,
in front of the Petrobras headquarter in Rio
de Janeiro, Brazil, August 24, 2015
0
2845
Add Reader

The 59 year old Calheiros, from Alagoas State, a major tobacco producer, in the poor northeast, has served as president of Brazil's senate four times. He is a member of the centrist Popular Democratic Movement Party (PMDB), Brazil's largest political party.

Because he is one of Brazil's foremost power players China's president Xi Jinping showed respect for him, granting Calheiros a private meeting during his visit to Brasília earlier in 2015.

President Dilma has formally accepted the resignation of vice president Michel Temer, who is also national president of the PMDB, as the political manager of the fractious multi-party ruling coalition. He will continue in the traditional role played by a vice president, leading the nation when president Dilma is traveling outside of Brazil.

He offered his resignation as political manager for the coalition to Dilma earlier in August 2015 but she would not accept it.

Her accepting it now may have had something to do with the 74 year old Temer articulating his own presidential ambitions and saying that if he became president he would keep Dilma's neoconservative “Chicago Boy” finance minister Joaquim Levy in that job.

With Temer out of the power equation it's up to Renan to protect Dilma from facing impeachment charges linked to corruption at state oil giant Petrobras that are being orchestrated by renegade president of the lower house Eduardo Cunha, who, ironically, is a member of the PMDB.

Reaction to media coverage of Temer "distancing" himself from the political articulation did not put president Dilma's leadership team in a very good light and Temer has modified his story somewhat. The vice president now says he will continue to follow developments in how the coalition is being managed and play an active role in the "articulation." In the often opaque Brazilian political jargon this means Temer is "still in" but on the fringes of the "inner circle."

Cunha and the politics of Pentacostal Populism

Lower house president Eduardo Cunha broke away from the Worker's Party coalition in March 2015 and encouraged other federal deputies to join him in what amounts to an opportunistic anti-Dilma coalition in Congress. Cunha is a member of the Assemblies of God church (AOG).

According to the 2010 Brazil census 12.3 million people indicate that they are memers of an Assemblies of God church in Brazil. The AOG pays no taxes and operates radio and television stations whose leading evangelists are influential members of Brazil's lower house that is run by Cunha.

Like the Assemblies of God churches in the United States the Brazilian organization operates its own social action agenda, is virulently anti-Communist, and challenges the doctrines of Liberation Theology propagated by the Roman Catholic Church. 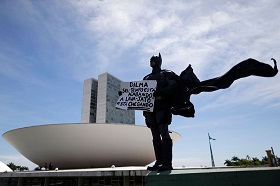 Cunha is from Rio de Janeiro, which is an AOG stronghold. He doesn't hide his presidential ambitions.

Recently, Cunha and other breakaway federal deputies feigned solidarity by dining with Dilma at her Alvorada Palace residence in an attempt to end the political gridlock that is damaging Brazil's reputation in global financial markets.

After making headlines by telling media that he is not trying to undermine the government Cunha later used his Twitter account to claim he is not responsible for the weakness of a government that lacks a political base.

The very next day he held his own presidential palace to hold an anti-Dilma event.

Between April and June 2015 Cunha hired the U.S. risk management firm Kroll, Inc., which has close contacts with the FBI and CIA, to investigate persons who might be a threat to him. Effectively he maintained what amounts to his own Watergate-style "enemies list."

Brazilian media claim, however, that the Kroll investigation did not provide Cunha with any substantive information.

The question remains as to whether Renan Calheiros and his connections can contain the evangelical zeal of Cunha's populist anti-Dilma campaign.

In a speech to a syndicate of bank workers in Sao Paulo recently Lula said that critics were persecuting the Worker's Pary and president Dilma in the same way the Nazi's persecuted the Jews. A few days later a homemade bomb went off in front of the Lula Charitable Foundation damaging the facade but without causing injuries.

Defense minister Jaques Wagner, who is of Jewish heritage, called the bombing an act of terrorism.

The real threat to Dilma's presidency may not be impeachment but a possible accounting oversight in the financing of her 2014 presidential campaign.

The arrest of Jose “Ze” Dirceu in the Lava Jato (auto wash) investigation into money laundering scammed from state oil giant Petrobras has damaged the credibility of former president Lula and the Worker's Party.

At the beginning of his first term in 2003 Lula picked Dirceu to be his chief-of-staff, which is considered the most powerful position in the government.

In 2005 Dirceu resigned after being found guilty of masterminding the biggest vote buying scheme in the history of Brazil's young democracy, the “big monthly payoff” or Mensalao.

Dirceu was banned by Brazil's congress for engaging in political activity until 2015, and given house arrest that enabled him to live and work at home.

But Dirceu, a former urban revolutionary like president Dilma, defied the ban and his recidivist behavior finds him back in jail doing “hard time” on new charges of active corruption stemming from the Petrobras scandal.

Sergio Moro, the presiding judge in the Lava Jato (auto wash) investigation run by the Federal Police has determined that a Dirceu controlled consulting firm laundered and distributed millions of dollars scammed from Petrobras into secret accounts, cash payouts and fronts operated by company executives, politicians and parastatal engineering firms. Projects were overbilled. Bribes to win contracts were paid. 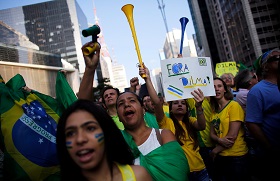 A major Japanese engineering firm and Korea's largest electronics firm are also involved in the Petrobras scandal because they are investors in Brazilian companies.

The scandal not only involves Petrobras, it includes Nuclearbras, and Electrobras.

Until recently Dirceu was considered “untouchable” by the justice system because of his close personal relationship with Lula, serving as Lula's chief-of-staff. (Others say he was the brains behind the president.)

Some radicals in the Worker's Party say that the party heirarchy stopped protecting Dirceu in order to insulate Dilma, who served as Minister of mines and energy and chairman of Petrobras during president Lula's first term. She had a close working relationship with the giant Odebrecht construction and engineering firm at that time.

The Odebrecht company is at the center of the Federal Police investigation of corruption at Petrobras and the Lava Jato (auto wash) investigations involving money laundering linked to Petrobras scandal.

Statements to the media by Alberto Yousseff, the top money launderer named in the Petrobras-Lava Jato claim that former president Lula and president Dilma had knowledge of the corruption at Petrobras and among other companies and politicians. Yousseff is cooperating with authorities and will receive a reduced sentance. He is also a political ally of lower house president Eduardo Cunha.

If Dilma's campaign did receive funds scammed and laundered from Petrobras - Brazil's constitution requires that both the president and vice president resign since they are part of the "ticket" and new elections be held.

The real threat to Dilma's presidency may not be impeachment but a possible accounting oversight in the financing of her 2014 presidential campaign.

The Supreme Electoral Court, the Federal Accounts Tribunal, the Solicitor General of the Nation and lower house president Cunha are all taking a closer look at the finances of Dilma's 2014 presidential campaign.

Although the accounting report was initially approved, the campaign financing is being reexamined for the purpose of determining whether the ticket of Dilma Rousseff for president and Michel Temer for vice president received illegial contributions skimmed from the Petrobras scam.

The review process is likely to take a long time. But if improper activity is found - for example if Dilma's campaign did receive funds scammed and laundered from Petrobras - Brazil's constitution requires that both the president and vice president resign since they are part of the "ticket" and new elections be held.

A key informer in the Lava Jato (auto wash) investigation conducted by the Federal Police involving money laundered from the Petrobras scam has told a Sao Paulo newspaper that Cunha demanded a $5 million bribe to insure that things went smoothly. Cunha vehemently denies this.

Senate president Renan Calheiros has also been linked to receiving money in the Lava Jato scam. But he is the most “bulletproof” of all Brazilian politicians.

In 2013, an online petition calling for the impeachment of Calheiros for conduct unbecoming for a senator obtained 1.5 million verified signatures. In the world of realpolitik Calheiros’s clever legal maneuvering caused the impeachment petition to be nullified. It's an example of the faiblesse of social media in power politics.

Recent editorials in the New York Times and the Financial Times of London and El Pais in Madrid have taken the same line that the impeachment of president Dilma would represent a setback for Brazil and democracy in Latin America.

The Financial Times stipulated that a new election prior to 2018 would draw from a field of mediocre candidates.

For now, it appears that Calheiros will take the necessary measures to rescue Dilma's unraveling coalition from its political fratricide and keep it on an even keel through the 2016 Rio Olympics and the 2018 national elections.

The economic crisis is another story since it continues to worsen and will last much longer than president Dilma and her advisers admit.

Meanwhile Dilma's old nemesis, political carpetbagger Marina Silva, is waiting in the wings to market herself as Brazil's first president of Afro-Brazilian heritage in the 2018 national elections. Marina served as environment minister under president Lula but broke with the Worker's Party and is seen by the leadership as a traitor.

Like Eduardo Cunha, Marina is a member of the Assemblies of God.