Diplomatic Salvage: Making the Case for the Cooperative Airspace Initiative

Increased military activity in the shared NATO-Russia area continues to pose a risk to civilian aviation, as well as increasing the risk of dangerous military to military incidents or accidents. Whilst the April 2016 NATO-Russia Council meeting made reference to modernising OSCE confidence and security building measures, no mention was made of a key mechanism previously operated by the Council itself: The Cooperative Airspace Initiative.

The increasingly unstable environment in Europe, characterised by the simmering conflict in Ukraine, the ongoing flight of refugees into Europe from warzones on the continent's periphery, and the action-reaction dynamic of military exercises between Russia and NATO, is rife with opportunity for miscalculation. Whether as a result of an accidental collision involving military aircraft or a misunderstanding of another actor's intentions, in particular in the aftermath of a fatal incident, there is a real possibility that political leaders will find themselves reacting to events rather than shaping them. In the current climate it is not difficult to envisage a fatal incident being interpreted as an ambiguous, but nevertheless deliberate, hostile action undertaken by ‘the other', thus requiring an appropriate response. Once this dynamic is in place it is very difficult to defuse, with political leaders drawn into rounds of successive and self-perpetuating escalation. It is thus crucial that politi¬cal leaders take all possible precautions to minimise risk and the scope for misunderstanding when considering and implementing military actions.

A principle and ongoing danger is the threat to civilian life, specifically airline passengers, posed by the increased military activity that has resulted from this deteriorating situation. This applies not only to flights over active combat zones such as MH17 (which have in any case been curtailed) but also to those operating within the NATO-Russia shared area, throughout which military air traffic has increased substantially since 2014. As has been well documented Russian aircraft flying without transponding their position to civilian air traffic control have on two occasions forced evasive manoeuvres from SAS civilian airliners [1], with several other lesser-reported incidents exhibiting dangerous characteristics [2]. Russia has also claimed that US and NATO aircraft pose a similar risk [3].

With civilian air traffic in the Baltic and Black Sea regions set to increase markedly in coming years [4], more must and indeed can be done to mitigate this risk, but action will require a willingness to reassess existing diplomatic tools.

The meeting of the NATO-Russia Council (NRC) held at the ambassadorial level in April 2016, the first such meeting since June 2014, was in some respects a successful starting point. That the meeting happened at all reflects a recognition that dialogue is necessary to avoid unwanted escalation in the ongoing NATO-Russia confrontation, while reflecting that dialogue does not represent an acceptance of the other side's position. The meeting's partial focus on transparency, risk reduction and military to military communication is certainly to be welcomed [5] .

Whilst post-meeting reports made reference to ideas tabled by NATO members relating to a modernisation of the OSCE's Vienna Document and the confidence and security building measures (CSBMs) contained therein, no reference was made to a key CSBM previously operated by the NRC itself: The Cooperative Airspace Initiative.

The Cooperative Airspace Initiative (CAI) was set up by a NRC working group in 2002 in response to the September 11th terrorist attacks [6] . The CAI was intended to provide increased transparency, early notification of suspicious air activities (including loss of communications), and rapid coordination and joint responses to security incidents in European airspace [7] . This was to be achieved through real-time exchange of radar tracks and a shared picture of air traffic, dedicated lines of communication, and commonly agreed procedures for notification and coordination of suspicious air activities [8] . 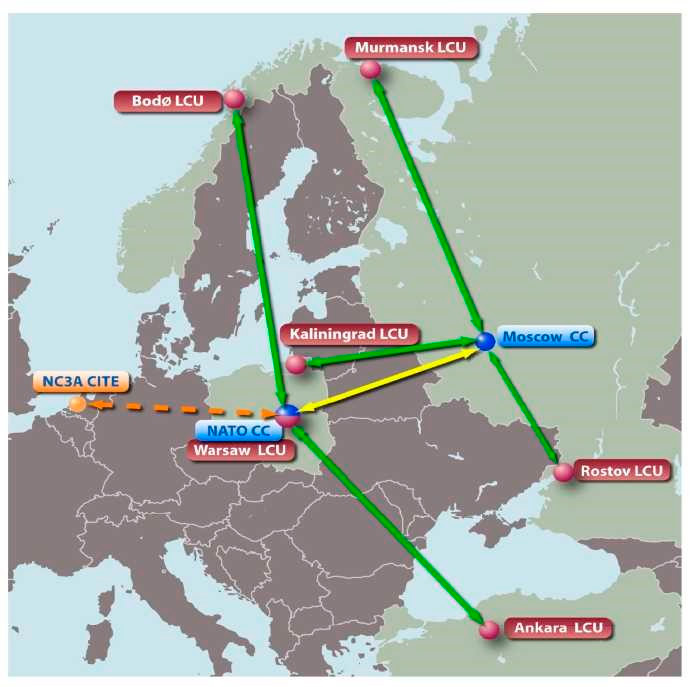 Crucially the CAI made use of software that “combines and links several civilian surveillance and military [10] sensor data sources to provide a Recognised Air Picture” [11] . This, combined with the direct telephone connection between the coordination centres of the CAI network, enables the “sharing [of] real-time radar data and standardised voice communication procedures between the CAI member nations” [12] .

The CAI became a live system in 2011 through the Vigilant Skies 2011 exercises, in which NATO and Russian control centres and interceptor units jointly managed a situation involving a hijacked civilian aircraft (a similar exercise took place in 2013). Operationally the highpoint of the CAI was switching to high alert in order to provide enhanced coverage of the February 2014 Sochi Olympics.

Following the suspension of the cooperative functions of the NRC in April 2014 the CAI has ceased to operate. The shutting down of information exchange channels and their accompanying monitoring centres [13] must be viewed as a contributory factor in the uncertainty surrounding

Russian and NATO military air activity in their shared area, in particular as it pertains to civilian-military air traffic control interaction. It must also therefore be viewed as a step making it more difficult for leaders to maintain control over events, any one of which could trigger a new and dangerous phase of escalation in NATO-Russia relations.

Whilst it may not be politically feasible to reinstate full cooperation through the NRC the technical assets of the CAI remain a valuable resource when considering improving the safety and transparency of military activity in the shared area. A reassessment of even a limited reactivation of the CAI's monitoring stations and coordination centres must be considered (it is plausible that the CAI may be removed from the auspices of the NRC and instituted as a stand-alone measure). This has value in its ability to provide a common picture of the airspace bordering Russia and NATO, dramatically reducing the risk of a misinterpretation of the others' actions that could lead to unnecessary escalation. There is also a possibility that these assets be used to create a verification mechanism for existing [14] or future agreements. It has also been repeatedly stated by officials from both sides that the CAI framework is open to the involvement of third parties, specifically Finland and Ukraine. Indeed the development of the NATO-Ukraine Regional Airspace Security Programme represents a step in this direction [15] .

At present civilian air traffic control operators have an incomplete picture of the shared area, relying on ad-hoc arrangements with regional militaries to share access to primary radar and on interceptor aircraft that continue to broadcast their position when escorting an uncooperative (declining to transpond their position) military aircraft. The software behind the CAI is fully capable of completing this picture (particularly if the initiative is extended to Sweden and Finland) should military data be volunteered, as well as providing a direct NATO-Russia communication channel to manage any resultant problems. Furthermore the discussions preceding the CAI took into account the relatively common loss of communications (COMLOSS or PLOC) between an aircraft and ATC as a result of faulty equipment [16] . The incorporation of efforts to address this failing would be another significant contributor to stability and transparency in the shared area.

Diplomatically the implementation of these suggestions would be a difficult task. The Baltic States have on multiple occasions expressed concern when NATO-Russia information sharing has been tabled, fearing its impact on their own security. This is of course a valid worry, however it must be stressed that lack of transparency in military and civilian air traffic control poses a serious risk to civilian life. As mentioned above, incidents involving near collisions between Russian bombers and civilian airliners have been well documented, and this is a risk that will only increase alongside the upward trend in civilian air traffic in the Baltic Sea area.

Baltic State support is crucial not only in order to renew interest in the CAI project as a whole but also in order to improve its operating capability. It is likely that an additional monitoring centre located in the Baltic States would be able to provide, alongside the existing Russian centre in Kaliningrad, a clearer picture of the concentration of interceptions and areal confrontations occurring in that region. This would provide a more objective base to develop and later verify implementation of any risk reduction agreement.

A rise in Russian complaints regarding NATO intelligence-gathering flights may also make the Kremlin amenable to discussing this initiative, building on past support for the programme in Moscow.

Whilst the NATO-Russia Council is likely to remain a very limited forum in the near future, the salvaging of the Cooperative Airspace Initiative would represent an important step in safeguarding those caught in the middle of confrontation and in increasing leaders' ability to control events. This will not be easy, but is worth the effort.

The author is grateful to Dr Anya Loukianova of the University of Maryland for her insight and assistance during the research for this paper.

6. Development of the CAI also reflected a long-standing US concern that, as elucidated by a Department of Defense official during the development of proceeding Regional Airspace Initiative, “…without close military/ civilian coordination and cooperation and cooperation, you introduce artificial constraints into the airspace and those constraints reduce our ability to grow capacity and in some ways may affect air safety.” Airspace Plan Paves Way for Safer Skies Jane’s Defence Weekly 8 October 1997

10. However due to concerns expressed by the Baltic States the full Recognised Air Picture, inclusive of military data, was never operationalised.

13. CAI monitoring centres operated within existing facilities through off-the-shelf computers and open source software, it may be assumed that associated hardware has been repurposed

Rate this article
Share this article
FOLLOW THE LATEST DEVELOPMENTS
Tags
NATO, Russia, Air traffic control
Reader's choice
HideShow
About the Wise Monkey Who Came Down from the Mountain
Illusions of a New Bipolarity
COVID-19 Presents Both Opportunities and Threats to Russia’s Foreign Policy
Egypt May Become the Next Bergamo
A Russia-EU-Africa Energy Strategy. Nuclear and Renewable Energy Security