China’s Military Budget: Why It Is Growing and Will Continue to Grow Fast

REUTERS/Jason…
REUTERS/Jason Lee/Pixstream
Commander of the Air Force of the Chinese
People's Liberation Army Ma Xiaotian speaks
to Commander of the Chinese People's
Liberation Army Navy Wu Shengli during the
opening of the annual full session of the National
People's Congress, the country's parliament, at
Great Hall of the People, in Beijing,
March 5, 2015
0
4632
Add Reader

The growth of Chinese military spending and build-up of the army’s technological capabilities is a natural and inevitable process. It would be odd to expect that the new economic superpower of the modern world would continue to be a military dwarf and its army would to go on using Soviet military equipment vintage 1950s and 60s. The growth of China’s military might is following the growth of its economic might with some lag.

The PRC’s official military budget does not include some important defence-related expenditure items. For example, R/D in developing new weapons are financed by the ministries of industry and informatization and the ministry of science and technology (serially produced weapons are procured out of the military budget). Besides, much of the spending on the maintenance and training of the forces’ reserves and social security of retired servicemen is outside the military budget. Thus it cannot be ruled out that the country’s overall military spending has been growing somewhat faster than its GDP. However, on the whole there are no grounds for thinking that the Chinese are dramatically building up the share of military spending or mobilizing resources for military purposes.

Why does China have to increase its defence spending and cannot be content with less military spending in real terms? There are several reasons for this. The first is the huge amount of deferred spending on the army’s modernization accumulated during the 1980s and 1990s.

In 2015 the military budget of the PRC will grow by 10.1% , a relatively modest growth by the standards of the past ten years.

The physical peak of the manufacture of heavy weaponry, such as tanks, artillery systems, armoured vehicles and war planes in China fell on the early 1970s when the relations with the USSR deteriorated. On many counts the production of weapons and ammunition during that period has never been exceeded. In the 1980s the state defence procurement order shrank dramatically because the PRC government concentrated resources on solving economic and infrastructure tasks. It can be said that from the early 1980s and until the mid-1990s the Chinese defence industry experienced one and a half “lean decades” similarly to the Russian defence industry in 1993-2008, albeit perhaps not in such a dramatic form. 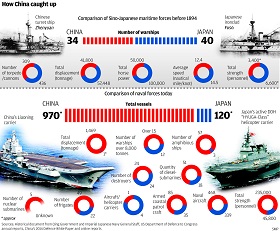 www.scmp.com
Infographics. How China caught up

In terms of many types of weapons and military equipment the Chinese army still relies largely on the weapons developed and produced in Chairman Mao’s lifetime. Photos and videos of the People’s Liberation Army military exercises shown by the Chinese media still often show Tank 59 (the local version of the Soviet T-54A), Type 66 howitzers (the Soviet D-20), Type 59 57 mm anti-aircraft guns (the Soviet S-60), Type 63 armoured vehicles and similar archaic hardware. Yes, the number of these antiquated weapons is diminishing year and year out, but China is probably the last big military-industrial power where such hardware is still used on a considerable scale.

Developed Western countries and Russia still rely in many ways on the military-technical legacy at the tail end of the Cold War. Their weaponry of the 1980s-early 1990s is often still valuable from the military point of view requiring only maintenance and modernization of electronics. China curtailed massive defence production a decade before the end of the Cold War and besides, it was initially among laggards in the sphere of military technology. Where the Russians, Americans and Europeans can confine themselves to modernization the Chinese have to develop new weapons from scratch to replace the antiquated hardware they had inherited from the mobilization economy era.

In real terms the official military budget has been growing roughly at the same rate as China’s GDP.

Moreover, many cutting-edge Russian and American military ideas are based on the technological legacy of the period of confrontation between the USSR and NATO. This is true of military uses of outer space, stealth aircraft, air defence and missile defence systems, laser weapons, nuclear submarines and many other types of military equipment. China has no such legacy to draw on. Not to be left hopelessly behind in the military field, the Chinese in the 1990s and 2000s created new defence industries, research and design schools from scratch. The cost in one way or another was included in the cost of the weaponry procured by the People’s Liberation Army. 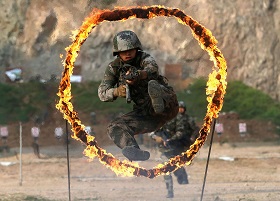 There are no grounds for thinking that the Chinese are dramatically building up the share of military spending or mobilizing resources for military purposes.

Another sphere in which China has to make up for the consequences of many years of underfunding of the military is the material security and training of the personnel. Historically, People’s Liberation Army has been performing not only military functions but also many non-defence commercial tasks. With the onset of the era of reform the army was allowed to create its own commercial enterprises and became the owner of a vast business empire that includes industrial enterprises, financial, trade and investment companies, hotel and restaurant chains.

For a while this enabled the state to keep military spending at a low level at the cost of diminished combat ability and growing corruption within the People’s Liberation Army. It was not until 1998, with the rapid growth of military spending already in full swing, that the Chinese leader Jiang Zemin was able to order the army to curtail its commercial activities. In spite of the existence of the army business and the signs of growing defence spending, the salaries of Chinese servicemen were way below the level of wages in the economy.

However, the revolution in military affairs in the past decades changed the requirements to the educational standards of servicemen. Their salaries have been growing fairly fast seeking to keep up with the wage inflation that is gaining momentum in the Chinese economy (caused by the demographic changes in the PRC and the labour shortage). For example, the recently introduced institution of Senior Sergeants in the People’s Liberation Army is backed up by a monthly salary of 7000 yuans ($1130). In the new wealthier, better educated and urbanized Chinese society the army has to rethink its decades-old approach to the living conditions and social security of servicemen. 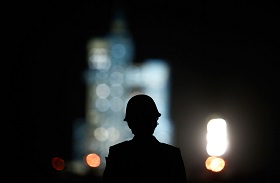 Judging from available Chinese publications military training is another sphere where China is trying to catch up. Until the beginning of the 2000s the Chinese armed forces reported low indicators of average flight hours logged by airmen, naval ships seldom put to sea and large-scale land forces exercises were few and far between. Naturally, China sought to gradually upgrade these indicators to match the developed countries, such as the USA and Japan. The average air pilot, judging from most estimates, fly an average 100-150 hours a year and in some units that have modern aircraft, the figure may exceed 200 hours. The navy has increased the number of long expeditions and has for a number of years maintained a constant presence off the coast of Somalia taking part in the international anti-pirate operation. By now Chinese naval ships have expanded the geography of their visits to reach Latin America. At the same time in terms of global military presence the Chinese armed forces are still far behind those of France and Great Britain despite the fact that China is well head of these countries in terms of its global economic role and its weight in international affairs.

The growth of Chinese military spending and build-up of the army’s technological capabilities is a natural and inevitable process. It would be odd to expect that the new economic superpower of the modern world would continue to be a military dwarf and its army would to go on using Soviet military equipment vintage 1950s and 60s. The growth of China’s military might is following the growth of its economic might with some lag. The world has largely resigned itself to the PRC being a centre of the world economy. It will have to accept China as a military super-power as well.

Rate this article
Share this article
FOLLOW THE LATEST DEVELOPMENTS
Project
Russia and China: Partnership in the Context of Security Challenges and Development in the Asia Pacific
Tags
China, Arms, Armed Forces, PLA
Reader's choice
HideShow
The Nuclear Triad: Alternatives from the Days Gone By and Possible Futures
New Hope: Openings of APEC-2022 Summit
What’s Your Power, Strong AI?
G20 Summit of 2022: Bridging the North-South Divide
The G20 Summit and Beyond