9 May for Turkey: Devoid of Significance

If we analyse the broad range of Turkish academic historical literature, education textbooks, etc, the references to the meaning of the Patriotic War for Russia and the new states that emerged from the USSR are extremely few in number. This is explained by many factors, including geopolitical ones. Thus, for example, soon after the end of the war Joseph Stalin not only raised the issue of changing the system for use of the Bosphorus but also made a number of territorial claims against Turkey.

In the light of the geopolitical situation that has developed in relation to Russia’s foreign partners’ attitude to the country, the celebration of the 70th anniversary of victory in the Second World War will be a kind of litmus test both for Russia’s political elite and for the majority of the country’s citizens. The decision by a number of western leaders not to come to the events celebrating this anniversary has sparked a wave of indignation among the Russian public and at the same time made it close ranks, supported by the active stance of patriotic organisations and by numerous new fictional and documentary films about the 1941–1945 war. Uncompromising rejection of the nationalist ideologies which are emerging, in the opinion of the ruling elite, in certain European states and in countries adjacent to Russia is seen by the public as something bigger than an official government position. The Immortal Regiment campaign dedicated to the memory of those who died during the war, which is being conducted in every part of the world where emigrés from the former USSR live, shows once again the depth of the tragedy that marked the events of the Great Patriotic War.

For every people the history of their own country is inseparably linked with their personal history. At the same time the political elites and leadership of states need to understand that the use of sensitive topics concerning the historical memory and perception of particular events should be as correct as possible, so as not to cause harm to bilateral relations or to the country’s image. In this context Turkey, whose past is closely interconnected with the history of Russia, is a clear example of how the interpretation of one people’s most important events differs from the position of another. For example, 9 May 2015 could have seen the first top-level visit by President Recep Erdogan to the Victory Day celebrations in the history of the two countries’ bilateral relations. However, following Vladimir Putin’s trip to Yerevan on 24 April 2015 the Turkish side will be represented only by Umit Yardim, the ambassador extraordinary and plenipotentiary in Moscow.

Turkey was not involved in the Second World War and considered the communist philosophy and the Nazi ideology as equally unacceptable. Also, in Turkey’s opinion it was the USA that made a substantial, if not the fundamental, contribution to the cessation of bloodshed. In this context the Soviet Union is regarded not as the conqueror of fascist Germany but as one of the poles in the new bipolar system of international relations. 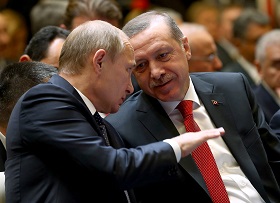 If we analyse the broad range of Turkish academic historical literature, education textbooks, etc, the references to the meaning of the Patriotic War for Russia and the new states that emerged from the USSR are extremely few in number. This is explained by many factors, including geopolitical ones. Thus, for example, soon after the end of the war Joseph Stalin not only raised the issue of changing the system for use of the Bosphorus but also made a number of territorial claims against Turkey. Such actions prompted the Turkish leadership in 1952 to join the newly formed NATO bloc. Following the strengthening of the USSR’s position right by the Turkish coast in the Black Sea, on the land border in Transcaucasia, Turkey’s apprehension concerning its powerful neighbour only increased. The aforementioned circumstances also influenced the way the events of the Second World War were interpreted and, importantly, strengthened the significance of the United States in the eyes of the civil population and political elite in Turkey. After the collapse of the USSR in 1991, however, the image of Russia as a potential aggressor began to diminish. From the beginning of the 2000s the negative perception of the Soviet Union and the one-sided treatment of the events of the Second World War began to give way to more cautious and rounded approaches, including in textbooks.

The statistical data reflected in a Pew Research Center report in turn points to the wary attitude of Turkish citizens to Russia as a whole. In 2012, at the point where events in Syria were becoming exacerbated, 63% of them said Moscow was an unfavourable partner for Ankara, and in 2014, after the annexation of Crimea and the continuing conflict in Ukraine, the percentage of those displeased by the actions of the Russian Federation grew to 73%. It must also be stated that there has been an increase in distrust of Russia, which is accompanied by a growth in the positive mood among Turkish citizens in relation to further strengthening of cooperation with the NATO countries. Between 2010 and 2014 the Turkish public’s support for the North Atlantic alliance rose from 30% to 49%.

Despite the extensive trade, economic and energy cooperation and the steady development of bilateral relations, including future possible implementation of the Turkish Stream project, the existence of unresolved regional conflicts in which Moscow is involved in one way or another is again giving rise to apprehension and is also shaping negative public opinion in Turkey. The Nagorny Karabakh issue, territorial issues concerning the integrity of Georgia, the Syrian crisis and finally the Ukraine conflict are exacerbating an already tense regional situation, setting the tone for relations between Ankara and Moscow.

Finally, it is also necessary to dwell on such an important aspect as the impact of Russia’s “soft power” on the perception by Turkey’s political elite and civil society of historical events, including the Great Patriotic War. It is well known that public opinion is influenced by numerous factors, the chief of which is the media. Only in 2005 did Moscow launch the first large-scale international project to report events happening in Russia – Russia Today. But there is a perceived lack of such resources in the Turkish language, which could fill the vacuum which has formed around information about Russia. There are extremely few exchanges of students and representatives of the academic community and analytical centres. In addition the lack of Russian cultural and educational centres in Turkey right up to 2014 undoubtedly played a role. On the other hand, in the context of strengthening bilateral relations Moscow could show greater interest in supporting Turkish cultural centres in Russia, using them as a channel for Russian history and culture.

An understanding of the significance of dates such as 9 May comes only when not only the political elites but also above all representatives of civil society in both states begin to work together at a quantitatively new level. The question of education, establishing close communications and familiarising people with the history of both countries play a key role here. Despite the difficulties that both states are experiencing, using the tools of “soft power” will be able to bring home the role of the USSR in the Second World War and the significance of 9 May to the civil population of Turkey, and the Russian population will gain a deeper understanding of the results of the First World War for Turkey.