At noon on the 1st of October 2012, the first Osprey V-22 aircraft landed at Futenma Marine Corps Air Station on Japan’s Okinawa Island. The controversial deployment of this ungainly looking aircraft (a hybrid between a helicopter and fixed-wing plane) has exposed tensions between centre and periphery in Japanese politics, revealed major fault-lines in the U.S.-Japan military alliance, and demonstrated far-wider strategic shifts and geopolitical miscalculations by key states in East Asia.

The Futenma base is located in the densely populated city of Ginowan, on Japan’s Okinawa Island. The residents of Ginowan have long endured aircraft noise at all hours, congestion around the base, and a catalogue of far more serious incidents and accidents. In August 2004, a U.S. military helicopter crashed onto Okinawa International University, adjacent to Futenma. Although no local residents were injured the university was damaged and local opinion inflamed. The incident also stirred memories of a tragic accident in 1959, when eleven children were killed after a U.S. jet crashed onto a school on the island.

There have also been a number of scandals, including the rape of a 12 year old school girl by three U.S. marines in 1995. The wide-spread disgust and subsequent protests resulted in a decision the following year to relocate Futenma's function to the less-populated north of Okinawa. However, this agreement is as yet unfulfilled. Hopes of closing the base altogether were raised by Japan’s former Prime Minister, Yukio Hatoyama, who in 2009 made an election pledge to move the base off Okinawa. Unfortunately, for those against the base, Hatoyama failed to keep his promise and was forced to resign in June 2010. The ground-swell of support behind the anti-base movement had been revealed in April of the same year, when around 100,000 citizens went onto the streets to demonstrate against the bases.[1] 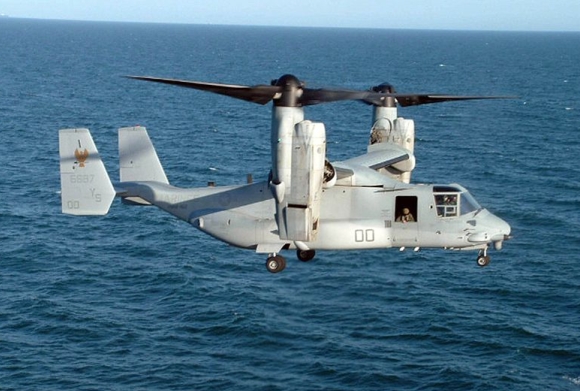 More recently, the deployment of the Ospreys has become a rallying point for those frustrated by the burden that Okinawa is forced to carry.[2] As the first Ospreys flew overhead on the 1st October, Ginowan Mayor, Atsushi Sakima and Okinawa Governor, Hirokazu Nakaima, watched the spectacle from the rooftop of the city hall. Sakima told reporters that: “People in Ginowan have been patiently hoping to see the return of the Futenma base for the past 16 years, but instead we were forced to shoulder more of a burden.”[3] Activists against the Ospreys have seized on the perceived unreliability of the aircraft, labelling it “the most dangerous aircraft in the world”[4] after a number of well-documented incidents and malfunctions.[5]

So, with all this local anger and resistance, why is the Futenma base still operating; and why is the controversial Osprey being deployed in the middle of a busy city? Firstly, Okinawa is Japan's poorest prefecture and the base provides employment, significant income to local businesses, generous rents to families whose land is used by the base, as well as subsidies to local authorities.[6] Other areas in densely populated Japan are also resistant to a U.S. Marine base being relocated to their towns. In Nago city, where the base was proposed to be relocated in 1996, the current mayor was elected in January 2010 on an anti-base platform. Futenma is also a symbol of prestige for the U.S. Marine Corps. Outside of the United States there is only one other airbase in the world (also in Japan), which is exclusively under Marine command and they are reluctant to give this privilege up.

In answer to the second point, local residents whose sleep will be disturbed by the Osprey’s night training exercises have to a large degree China to thank for their sleepless nights. China’s increasingly vocal territorial claims over islands in the South China Sea as well as its challenge to Japanese sovereignty over the disputed Senkaku/Diaoyu Islands in the East China Sea, has allowed the Japanese government to play the national security card – a card that nearly always trumps all others. As Japan’s Prime Minister, Yoshihiko Noda, put it, Okinawans should accept that the deployment of Osprey aircraft is “very important in terms of Japan’s national security.” [7]

The argument runs that the extended-range of the Ospreys will enable U.S. Marines to be rapidly transported to any potential regional flash point. This would include Taiwan and, crucially for Japan the Senkaku/Diaoyu Islands. In the case of the latter, it appears that there is a hope within the Japanese government that the Ospreys deployment will help deter China’s assertive claims and territorial ambitions.

Therefore, although the Osprey/Futenma issue at first seems like a localised affair it reveals some intriguing fault-lines not only in relations between Okinawa and Tokyo but also between Tokyo, Washington, and Beijing. The anti-base campaign has been gathering momentum and demonstrates how local protest movements can reverberate all the way back to national capital cities and beyond (something that is often missed in realist accounts of the region which focus exclusively on relative state power). Indeed, as the Ospreys were being deployed to Futenma, James Schoff, a former senior adviser on East Asia affairs for the U.S. Office of the Secretary of Defense, noted that “You cannot let politics dictate what platform you use. But in this environment, an accident is going to be like setting a match to a tinderbox.”[8]

In the event of a crash involving an Osprey or another major scandal, the pressure on relocating Futenma could reach unprecedented levels. Therefore, Washington may still yet be forced to react to local pressures, and is already considering redeploying certain facilities and troops to Guam.[9] However, with China’s recent activities in the East and South China Sea, Futenma has found a new strategic value for the U.S. and Japan. In this context, some of the elite in Beijing may have noted the failure of their own strategies. If China has not pursued such an assertive policy and uncompromising position in its territorial claims in the South and East China Seas, then there is a profound question mark over whether Tokyo and Washington would have succeeded in overcoming local opinion in order to deploy these aircraft.

The irony is that If China had chosen a more restrained policy, particularly towards Senkaku/Diaoyu, then the U.S. Marine presence in the East China Sea would have most likely been dealt a devastating strategic blow by a band of peace activists and local residents. These local protest activities could have accomplished a feat that the Chinese military is still not able of achieving. Instead, the result of China’s naval build-up and nationalistic rhetoric towards territorial claims, combined with the U.S. and Japanese response, has made the region increasingly militarised and less secure. It appears that much to the consternation of the sleep deprived residents of Ginowan, as well as to the restless military strategists in Beijing, the Ospreys will be hovering over Futenma for some time to come.

[2] Okinawa hosts around 74% of all facilities exclusively for U.S. military use