Russian President, Vladimir Putin, used Pakistan Prime Minister, Imran Khan, as a temporary scapegoat to deflect attention as he was about to launch what the Kremlin calls a “special operation” in Ukraine. The long-planned, two-day visit to Moscow of Islamabad’s head of government marked the first such official state visit in two decades. Khan was “excited” to be in Moscow, although the visit turned out to be a risky gambit under the circumstances in which it took place. 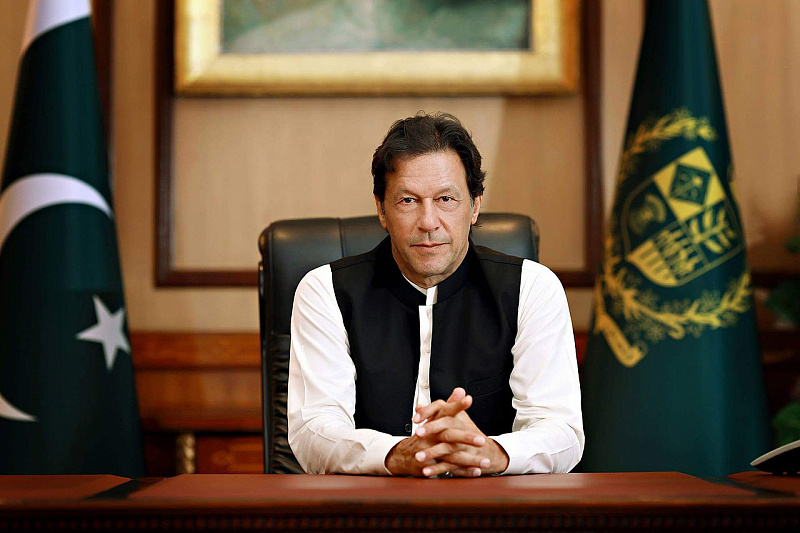 It is safe to assume that any other leader would have cancelled it, saving himself from a difficult political positioning, although some analysts have it that Imra Khan tried to play up his hand for domestic reasons. For PM Khan, a visit to Moscow in such a turbulent situation must have looked like an ideal ground to reclaim a position he never enjoyed back home. Showing up at the Kremlin at the height of rising tensions was not an easy choice, especially in light of the fact that the trip was primarily intended to boost energy and economic cooperation and give impetus to the multibillion-dollar Pakistan Stream Gas Pipeline. Pakistan’s ties with Russia have improved in recent years, after being unfriendly during the Cold War, when Pakistan was a key U.S. regional ally in countering Soviet forces in Afghanistan.

While getting out of the visit could have proven particularly difficult, it is beyond the shadow of a doubt to assume that Khan thought it was an ideal time and place to play global politics, perhaps at the prodding of the Generals. It is important to note that while Khan was preparing to visit Moscow, Pakistan’s powerful military chief, General Qamar Javed Bajwa, was meeting with EU officials in Brussels. In Pakistan, by default, all foreign-policy decisions are taken by the army, and Russia is too big a country to let a novice like Khan take the lead, all the more at a moment when he is rumored to have lost support from the military sector.

For him and his circle, the visit was another shot in the dark for glory, and like past attempts, it failed at take-off, much like befriending the Chinese without any great success. Another attempt worth remembering is when Khan bit more than he could chew when he and his ministers criticized the Saudi royal family so that the Generals had to rush in to stem the losses.

According to the official statements, Pakistan and Russia exchanged views on major regional and international issues, including Islamophobia and the situation in Afghanistan. The statements made no mention of the Ukraine crisis. In an interview with Russia’s state-owned television network RT, Khan expressed hope for a resolution of the conflict between Russia and Ukraine through peaceful means. Khan gave the interview in the capital of Islamabad ahead of the planned visit.

The Pakistani leadership is looking to urgently stabilize the country’s inflation-hit economy by increasing domestic productivity and attracting foreign investment. High on the agenda was meant to be the Pakistan Stream gas pipeline, a proposed 1,100km (684-mile) pipeline running from the Pakistani port city of Karachi to the central Punjab province. The project was conceived in 2015 but faced numerous delays until new agreements were drawn up in 2021. The pipeline, to be built at an estimated cost of $2.5bn, will be capable of transporting 12.4bn cubic metres of natural gas annually. By the same token, to achieve its economic goals, Pakistan is aware that it needs to maintain regional peace and avoid getting entangled in the expanding mesh of global power politics. This desire to maintain peaceful relations in the region has reinforced the Pakistani government’s expressed commitment to increasing regional connectivity, encouraging it to expedite work on the China-Pakistan Economic Corridor. Regardless of what Khan’s ministers have said about Pakistan’s “neutrality”, geopolitical analysts are watching as the world becomes more clearly divided. Islamabad’s close ties with Beijing are no secret, but the Pakistani authorities maintain that they want good relations with both China and the U.S.

Pakistan’s own relationship with the Taliban is, of course, not uncomplicated, but thus far it has attempted to work in tandem with China, Russia and the U.S. to help build a regional consensus that can undergird stability in Afghanistan’s neighbourhood. Lest we forget, Pakistan played an important role in the defeat of the Soviet Union in Afghanistan, with the support of the U.S. Without Pakistanis training the terrorist group called the ‘mujahideen’, the Soviet Union would not have been forced to withdraw from Afghanistan. Today’s Pakistan is no different. Putin has often made his mind clear on terrorism—that he will oppose all kinds of terrorism tooth and nail, so it is a wonder how the Kremlin can have a steady relationship with Pakistan, the country that harboured Osama bin Laden until the very last day.

Moreover, the time for “neutrality” from South Asian countries like Pakistan and India is almost over. Interestingly enough, India and Pakistan have both emphasised the importance of de-escalation in Ukraine, while carefully avoiding ascribing responsibility for the violence, with the nuclear-armed South Asian neighbours attempting to walk differing diplomatic high-wires, analysts say.

The visit has likely only increased Pakistan’s wariness of the many geopolitical trade-offs that strategic closeness with Moscow entails. Tensions with the West notwithstanding, Russia currently happens to be the largest arms exporter to India. India and Russia have had warm ties for decades, mainly due to Russian arms exports to New Delhi as well as other areas of cooperation. According to the Stockholm International Peace Research Institute (SIPRI), an estimated 23 per cent of all Russian arms exports between 2016 to 2020 went to India, accounting for 49 per cent of all Indian arms imports in the same period. In December 2021, India said it had begun to receive deliveries of the Russian S-400 ground-to-air missile defence system, following a visit President Putin paid to New Delhi that month. Analysts say India’s abstention at the UN Security Council (UNSC) vote could be a result of both the large arms imports and India’s more nuanced position on issues related to conflicts involving the U.S., Russia and China. The Indian Air Force is in the process of deploying Russian-made S-400 surface-to-air missile defence system batteries on its western border with Pakistan as a means to ward off airborne threats, while Indian Air Force officers and personnel have been receiving Russian training on these new systems. India’s defence and security closeness to Russia dates back to the Soviet era, when the Kremlin actively backed India in the 1971 war that cost Pakistan its eastern wing. Pakistan is thus wary of becoming too close or dependent on Russia, but it does not want to harm strengthening relations and push this global power further into the arms of India either.

All in all, notwithstanding vocal criticism from some quarters in the West, by going forward with his visit to Russia amid the military operation in Ukraine, Prime Minister Khan seems to have taken a calculated risk in line with what Pakistan sees as its current strategic, economic and political interests. It is still not clear whether President Putin will accept Prime Minister Khan’s invitation to visit Islamabad later this year. While five U.S. presidents have visited Pakistan since 1947, a Russian head of state has yet to make the trip—so if Putin does agree to make the journey, he would be the first Russian leader to do so, which will send an important message about the future of Russo-Pakistan relations and, more broadly, about Russia’s stance in the world arena.

In the end, Islamabad appears willing and able to work with Moscow—despite some underlying geopolitical contradictions—to stabilise South Asia, promote regional integration, and avert a humanitarian crisis in Afghanistan, even as one, paradoxically, may be beginning in Eurasia Western flank.

On the other hand, Russia’s attempt to befriend Pakistan is unlikely to be of any great utility and might have the side effect of disappointing India, where the relationship with Russian literature, arts and military has been too long and deep. Putin shall not forget this historical relationship in a bid, largely at the behest of China, to make friends with Pakistan.