Multilateralism Without the USA

Multilateralism can happen without a hegemonic power (the USA) 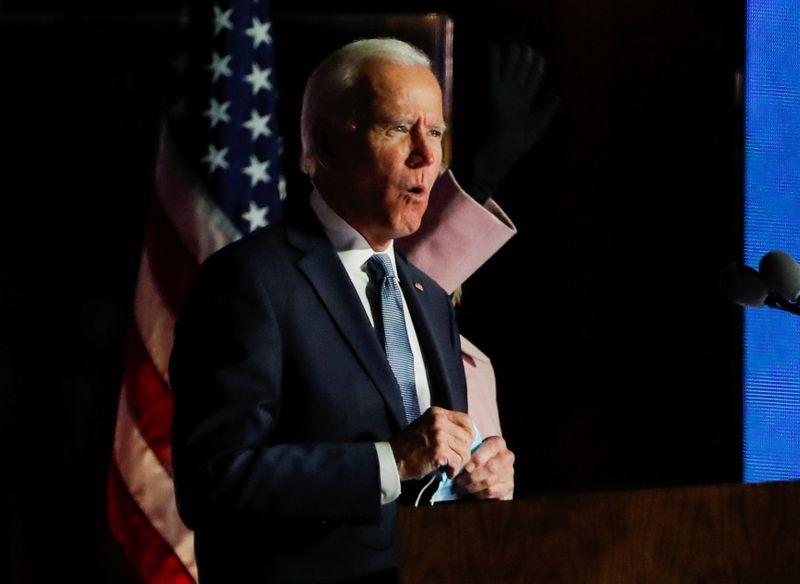 It has already done so for a long time. As I have described earlier: "Nobody waits for Biden" (or the USA). The World is everywhere moving fast around the USA - leaving an ever more bewildered USA behind. US President Biden doesn't get it. Biden still lives in his inner past experiences of the Cold War and the subsequent American World Order - both gone worlds.

Developments of the past three years

Here are some recent events, which highlight this strategic development:

1. The CPTPP was driven through by the other countries in 2018, after Trump putting “America First” jumped it. This now leaves Biden in a dilemma with his Trump mimic of Buy American (first).

2. The EU-MERCOSUR trade agreement was agreed in June 2019. A true multilateral agreement, not between countries, but between blocks of countries, two of the World’s Mega-Regions.

3. The Brazil-China trade pact in 2019, a result of over 10 years of strategic partnership. Brazil-China is an indicative case of a growing Mega-Region to Mega-Region multilateral cooperation as it involves most of South America. For example, it drives ambitious transcontinental South American infrastructure plans, which include to connect Brazil, Paraguay, and Bolivia with the growing Pacific shipping between Peru and China. Speak of “BRI Latino”.

4. The RCEP was initiated and in 2020 driven to conclusion by the ASEAN - not by China. The US is out. RCEP unites a complex of relationships between ASEAN, China, Japan, Korea, and Australia.

5. The Comprehensive Agreement on Investment (CAI) was driven through by the EU with China in the very last days of 2020, on 28 December - directly against the USA. China opens opportunities with the CAI agreement, while the USA diminishes with “Buy American”. Cars are a good illustration. China is a far bigger car market than the USA. With 25 million cars sold in 2019, China’s car market is nearly 50% bigger than the US car market. This perfectly illustrates China’s trade potential vs. the USA. China’s car market is not only so much bigger – China may double. In contrast, the USA car market completely stagnates. No, China did not just “drive a wedge” between the EU and the USA with the CAI agreement - the EU wants it. To be competitive in products like cars, the EU needs to be in China. The US loses out by staying out. The EU wants factories in China.

6. China, Russia, and Turkey make big agreements without the USA. Russia and Turkey decide on peace and the whole future of places like Syria and Nagorno-Karabakh, leaving the USA in the cold. They deal with Iran very much as they want.

7. India this year presses harder for an EU trade agreement. That the EU recently made the CAI agreement with China does not keep India away from seeking business with the EU. We see complex multilateral relations develop, not involving the USA.

8. The EU just decided (with China surely agreeing) to make the Euro a world-currency everywhere outside the USA. Here, the EU acts in direct contradiction to the American "Longer Telegram" which is clearly US President Biden’s China strategy. In Biden’s “Longer Telegram” China strategy, Biden wants a supreme dollar hegemony. Biden also wants dollar hegemony to run mammoth US deficits. Nobody else needs that. The EU wants to protect itself financially against the USA, including the possible US takeovers of leading EU tech companies. China is on – USA falls off.

On top of the recent eight examples above, there is a range of multilateral developments which for several years have been running, fully independently of the USA. A good example is the complex EU-Russia-China cooperation the past decade which has created an exceptionally efficient railroad corridor of over 11,000 km from Chongqing to Duisburg. Not just without the US – even against the US. The Eurasian Landbridge railroad system is a great example of the emerging new multilateralism not involving the USA. It started in the early 2010’s and a decade later, it now involves more than the Mega-Region to Mega-Region level of EU, Eurasia, and China. It spreads out to individual EU and Central Asian countries. It furthers sprawling public as well as private business. And it is increasingly multitiered, involving Mega-Regional, Regional, national, and subnational authorities like Chinese province governments. We also have the Nord Stream gas cooperation Germany-Russia. Even against US sanctions. Imagine US reactions, if the EU for “climate-security” had tried to sanction against the US-Canada Keystone XL pipeline. Coming up, we have the strategic multilateral Africa-Europe partnership between the EU and the African Union (the AU). This is a growing multi-sectoral Mega-Regional cooperation involving trade, jobs, security, immigration, digital development, green transition etc. The USA is not involved. These examples all confirm the fast proliferation of successful multilateral agreements, cooperation, and understandings actively involving several of the World's Regions – except the USA.

The deepening of Canada’s multilateral cooperation to EU with the CETA trade deal in 2017 is also indicative of global cooperations increasing all the way round the USA – leaving the US rather alone. Instead of strengthening North American relations, the USA repeatedly sinks relations with its only two neighbors. The new North American free trade agreement USMCA has harder “local content” requirements and is thus substantially less favorable to Canada and Mexico than the NAFTA which is replaced. For instance, auto parts must now have 75% North American content. The USMCA also widely mandates a minimum wage in Mexico and Canada of 16 dollars/hour – the current US minimum wage is only 7.25 dollars. Even President Biden’s proposed minimum wage of 15 dollars/hour will still be one dollar less than what the USMCA mandates US neighbors – making unskilled Mexican workers uncompetitive. Canada’s steel exports are the biggest victim of US steel-sanctions aimed at China, ostensibly for “security reasons”. A hard hit on Canadian (and S.Korean) steel workers, which are military partners with the USA. And there is no sign that President Biden will reverse US protectionism. Recently, US President Biden with the stroke of his pen on a presidential order, unilaterally makes lost money out of 30 billions which Canada has at stake in the Keystone XL pipeline to the USA. Biden delivers a gut punch to Canada. President Biden’s “Buy America” order forbids not only allied EU, Japanese and Korean suppliers, but also Canadian and Mexican companies to supply the US government. Biden breaks multilateral commitments to the Government Procurement Agreement (GPA) under the WTO. Canada and Mexico are consistently being alienated by the USA and will increasingly need multilateral ties with others: The EU – and China.

Multilateralism without a hegemonic power (USA) has not only been happening for a long time – it even accelerates enormously, independently of the USA. The World is NOT waiting for newly elected US President Biden and his national security advisor Jake Sullivan with his “Longer Telegram” misconceptions. We see the emergence of the Mega-Regions, which I identified and described last year. 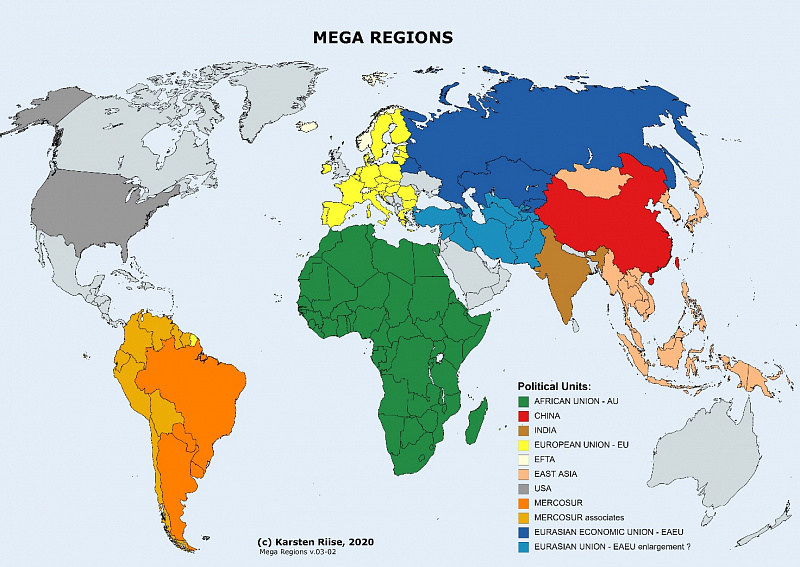 The World’s Mega-Regions integrate internally - and they make deals with each other externally. The USA is a single exemption to the development of Mega-Regions. Instead of integrating North America into a Mega-Region of shared governance, a “Buy America First” USA continues to consistently split itself from its two neighbors Mexico and Canada. The World of Regions is much-much more geopolitically complex than the bipolar or unipolar World ever were. The rules have changed - again. It is an entirely different reality from the obsolete imaginations of US President Biden and his team. As I stated in an interview of 7 January, published 21 January 2021 - Biden and the USA have much narrower space for maneuver than Biden and his team understand. The previous examples demonstrate how the new Regional World structure is radically more composite and multitiered than the bipolar or unipolar worlds were. Inside Mega-Regions you have other Regions. And in them even smaller Regions (sometimes criss-crossing). It is like the dolls inside dolls of the smiling Babushka nesting dolls, which I used in the picture with the USA marching off to its own perfect storm. (correctly, Matryoshka dolls, see picture below). 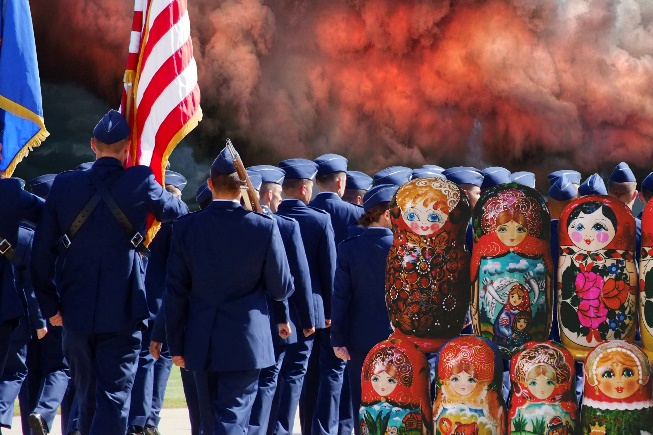 Africa, for example, is a Mega-Region. But inside, Africa's Mega-Region is organized into 8 official Regional Economic Communities (RECs), generally with regional parliaments under the Africa Union (AU) Parliament. And most of these 8 African Regions are criss-crossing each other. Africa illustrates the fractal World structure (regions-within-and-across-regions) which we see today. In the Mega-Region of the EU, Spain with its own internal Regions is also an example of fractal geopolitical structures of regions-within-regions.

Expect to see a growth in multilateralism not only between Mega-Regions (ref. above) but also inside Mega-Regions and across tiers (levels of authority).

My work-paper 2016 on the Future of Security concludes with a chapter on China. Countries around China must increasingly find their own modus-vivendi with China, as US power there inexorably recedes. President Biden believes he can reverse that long-term trend - he cannot. The Future of Security is a work-paper still in progress. Mega-Regions add to my theory, and the examples in this paper add more pieces for a whole theory. We need that – to manage the World. We must intensely observe structures as the Multilateral Regional World develops - increasingly structures not involving the USA.