President Putin’s visit to India in early December was a global geostrategic game-changer that unlocked the exciting potential for both Great Powers to align their respective Eurasian “balancing” strategies with a view towards eventually assembling a new Non-Aligned Movement (“Neo-NAM”). This came about as a result of two parallel processes: the 18-month-long sequence of complications in Indian-American relations and the gradual improvement of Russian-Indian relations after the past few years of twists and turns. The present piece covers the second-mentioned development, which is integral to understand in order to appreciate the importance of Putin’s trip. 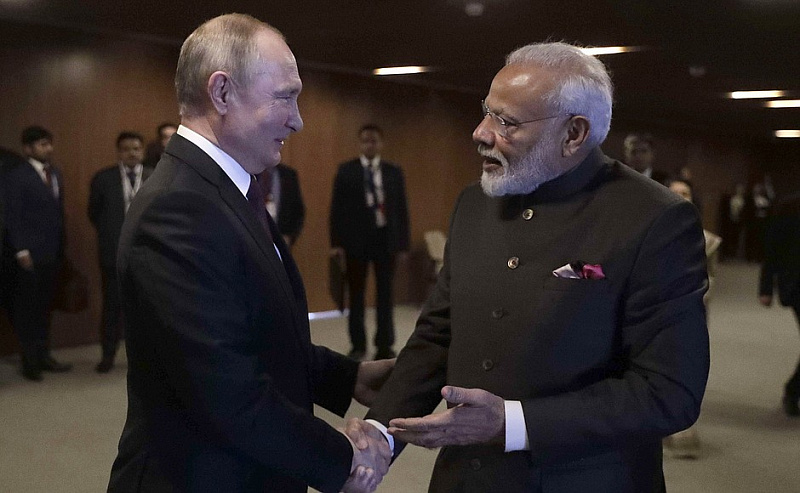 Russian-Indian relations steadily eroded since the end of the Old Cold War after Moscow was unable to function as New Delhi’s reliable partner in anything other than meeting its military-technical needs, which was still no doubt significant but nevertheless resulted in the loss of grand strategic importance that their de facto 1971 alliance used to have for Eurasian affairs. Former Russian Prime Minister and Foreign Minister Yevgeny Primakov sought to change that by laying the seeds for BRICS and the SCO, but his country still struggled to restore its Old Cold War-era comprehensive strategic relations with India despite joint statements to that effect in the proceeding years.

2014 was a game-changer for Russian-Indian relations even though neither realized it at the time. The US’ simultaneous provocations against Russia and China in Eastern Europe and the South China Sea pushed those two Great Powers together, which created the perception among some Indians that Moscow was at risk of eventually becoming Beijing’s junior partner. Furthermore, the election of Hindu nationalist Prime Minister Modi that same year resulted in a recalibration of India’s multi-alignment policy closer towards the US due to his party’s concerns about China. That in turn created the perception among some Russians that New Delhi was at risk of becoming Washington’s junior partner.

Russia also began to improve its relations with Pakistan due to shared security concerns stemming from Afghanistan, which further reinforced India’s negative perceptions about Moscow’s foreign policy tilt, especially after the Kremlin organized the Moscow peace process for that war-torn country. At the same time, though, India began to institutionalize its comprehensive multilateral cooperation with the US-led Quad that many observers considered to be an emerging anti-Chinese military alliance at the time, which in turn reinforced Russia’s negative perceptions about New Delhi’s foreign policy tilt. Without being all that consciously aware of it, American moves succeeded in sowing distrust between those two.

Although Russia and India have decades of time-tested and trust-filled relations, it appears as though neither side felt comfortable talking too openly about the proverbial elephants in the room: India’s suspicion of Chinese influence on Russia and Russia’s suspicion of American influence on India. Both regularly reaffirmed that they treasure their hard-earned strategic autonomy and won’t ever do anything with any third party that endangers the other’s interests, yet each side remained unconvinced due to what they were observing on the geopolitical front. The presumable lack of candid conversations for whatever reason ended up prolonging their misperceptions of the other’s foreign policy drivers.

This state of mutually suspicious affairs was intensified by Russia institutionalizing its newfound relations with China and Pakistan through Moscow’s decision to synchronize its Eurasian Economic Union (EAU) with Beijing’s Belt & Road Initiative (BRI) as well as the Kremlin’s progress in clinching the Pakistan Stream Gas Pipeline deal and exploring the possibility of participating in last February’s agreement to build a Pakistan-Afghanistan-Uzbekistan (PAKAFUZ) railway. On the other side of the coin, India signed three foundational pacts with the US military and began purchasing many more American arms while significantly decreasing its purchase of Russian ones for some time until recently.

What had slowly ended up happening is that Russia and India continued telling the other that they had nothing to fear from their respective foreign policy reorientations yet both of them subconsciously projected zero-sum motivations onto the other due to the optics involved which each feared could negatively impact on their respective national security interests whether directly or indirectly. India was worried that Russia’s comprehensively improved relations with China and Pakistan could somehow or another “embolden” those two to actively work against its interests while Russia was worried that India’s participation in anti-Chinese military alliances could destabilize China and thus indirectly Russia.

It wasn’t until the months leading up to Foreign Minister Lavrov’s trip to New Delhi in early 2021 and that actual trip itself that Russia and India seemingly finally had the long-overdue candid discussions that they should have had a while ago about their respective concerns regarding the other’s foreign policy tilt in recent years. They eventually realized that they want the same thing (“balancing” Eurasian affairs in an increasingly bi-multipolar world order) but are doing so in different ways (Russia was moving closer to China and Pakistan due to US pressure while India was moving closer to the US due to America’s enticement of it to join the nascent anti-Chinese Quad military alliance).

Russia and India learned that they can do so much more together in pursuit of their shared “balancing” interests if they coordinate their moves as much as possible while still respecting the other’s relations with third parties, including those that are the other’s rivals. This pragmatism distinguishes the recently clinched de facto Russian-Indian hemispheric-wide “balancing” alliance in the New Cold War from its 1971 predecessor half a century ago from the Old Cold War. Furthermore, the simultaneous 18-month-long sequence of complications in India-American relations weakened the influence of anti-Chinese foreign policy hardliners to the benefit of Russian-friendly moderates, which facilitated Putin’s visit.

The twists and turns of Russian-Indian relations over the past few years were in hindsight entirely due to the US’ unilateral foreign policy moves against Moscow and Beijing in parallel with its anti-Chinese outreaches to India’s then-new government. Neither Russia nor India meant to signal any negative intent towards the other through the respective recalibration of their “balancing” acts in these American-provoked geostrategic circumstances, but their failure to have candid discussions with one another over their rising mutual suspicions of the other’s foreign policy intent resulted in the perpetuation of foreign policy misperceptions.

The present renaissance in their strategic relations is due both to their proactive interest in resolving their lingering misperceptions but also curiously enough the US’ own unilateral foreign policy moves once again with respect to abusing India as a vassal state and thus compelling it to recalibrate its multi-alignment policy back towards its historical Russian-friendly direction. There might still be some misunderstandings between these two from time to time, but after having weathered the unprecedented twists and turns in their relations over the past few years, they’re better equipped to more responsibly manage them than before so no serious misperceptions are expected in the future.