The Efficiency of German Contribution in the Afghan Peace Process

Germany is heavily involved in the Afghan affairs since 9.11.2001; the country has brought in to being the modern Afghanistan thru launching the international Bonn conference “Bonn 1” in December 2001, the said conference toke place right after the collapse of the barbaric regime of Taliban in Afghanistan. Furthermore, it paved the way to engage several rival groups to establish an interim administration under the leadership of pro-American figure “Hammed Karzai”. Albeit the conference was a turning point in the Afghan modern history, but it encompassed numerous shortcomings because Taliban, Haqani Network and Hikmatyar band, who had been the main adversaries to the acting Government, were excluded from the process, which opened Pandora’s Box. Moreover, the national interests and apprehensions of the regional countries were not taken serious, which in turn caused destabilization and gloominess in Afghanistan.

Consequently, Pakistan and Iran who have been pursuing strategic depth in Afghanistan began to regroup, fund, train and outfit the Afghan government antagonists, which unfortunately incited a proxy war in the country. 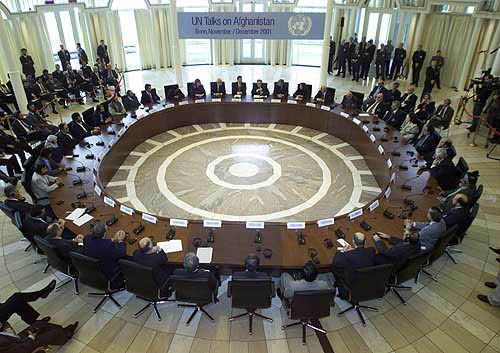 Germany hosted the second Bonn conference in December the 5th 2011 to celebrate the 10th anniversary of the first Bonn conference, in order to renew the so-called mutual commitment to a table, democratic and prosperous future for Afghanistan.

In addition, the participants of the conference ought to shed lights on some issues such as governance, security, economic developments, regional cooperation, peace process and the way forward. The participants called for a political solution to achieve peace and security in Afghanistan, in order to ensure durable stability.

Additionally, it was discussed to promote capacity building in the country to uphold a political process, to endorse negotiation and reconciliation. Unfortunately, the conference primarily focused on economic developments and continuation of democratization in the country, so that the peace process was sidelined and the root-cause of the instability and insecurity was not identified. Which ended up with further destabilization and blood-shed in addition, sparked fears and violence in Afghanistan.

In July the 7th 2019 Germany and Qatar hosted a conference in Doha Qatar, which was labeled intra-afghan dialogue. The hosting countries endeavored to bring about a framework in order to support the peace process in Afghanistan. In accordance with the joint statement, that the country is at a central crossroad to snatch the chance to accomplish peace, so the shortest concord linking the afghan adversary groups could be one of the essential factors of any process leading to such an objective.

It was also expect, that the conference would contribute to confidence-building amid chief rivals to hold up peace and constancy in Afghanistan. Although the conference did not have a tangible agenda, but at the end a resolution was released calling for reducing violence, avoiding to assail public institution and bringing civilian causalities to “zero”. Despite the efforts of the conference hosting countries, the conference comprised inadequacies; the Afghan government, which ought to be the main party, was excluded from the direct-intra-afghan-dialogue.

Not only the ceasefire, which has been the only wish of the Afghans, was not sincerely addressed, but also no-part of the outlined resolution has been implemented. Regrettably convening of the conference did not put into practice the expectations of the Afghan people, so that the security situation fundamentally deteriorated.

Subsequent, to the walk out of the US president from the Afghan peace deal, Germany wants to jump in exerting its leverage to bring the Afghan rivalry bodies to the negotiation table. Germany is really concerned, if the US troops withdrawal will take place Kabul government would collapse and the positive developments have so far came about would be lost. Thus Markus Potzel Germany’s special envoy for Afghanistan and Pakistan, since some times endeavors to hold meetings with the representatives of both Taliban and the Afghan government, in order to initiate another round of peace talks.

Consequently, If Germany genuinely put forth its efforts, it will help to avoid political vacuum in Kabul, let the democratization process to flourish, women rights to thrive and the economic prosperity to boom. Germany enjoys full-scale leverage in the entire region and beyond, because Germany stationed the second largest troops in Afghanistan, the country is one of the main initiator of the NATO Resolute Support Mission for Afghanistan and it is one of the top 10 contributors to the reconstruction process and humanitarian assistance in the country.

Germany has very good diplomatic relations with almost all of the surrounding countries of Afghanistan; it has influence on all of the gulf countries including Qatar, Saudi Arabia and UAE, which are supposed to be the major patrons of Taliban.

In addition, Germany leads the EU commission and it is the number one economy in Europe and number 4 economy in the world. If it will put in 2% of its GDP to the NATO annual budget, Germany would be the second leverage enjoyer within NATO following the United States of America. So Counter Narco-terrorism Alliance Germany (cnt-alliance) express the need for the initiation of the third Bonn conference, which should include all opponents to be brought to the negotiation table, in order to form a framework of lasting peace, continuation of the political process, stability, Good and lean governance, economic prosperity, revival of democratic norms and revamping of human and women rights as well as confidence building amongst regional countries.