The United States’ New Role in the Ukraine Crisis: Pros and Cons for Russia

The late January, media reports about U.S. Secretary of State John Kerry visiting Moscow proved misleading, with the Foggy Bottom's press service plainly stating that no such trip was planned. However, in recent weeks Washington seems to have become much more active on Ukraine, to the extent that it seems as if it is working to provide a new background for Kerry's talks with Russian Foreign Minister Sergey Lavrov on the sidelines of the February 6-8 Munich Security Conference.

The late January, media reports about U.S. Secretary of State John Kerry visiting Moscow proved misleading, with the Foggy Bottom's press service plainly stating that no such trip was planned. However, in recent weeks Washington seems to have become much more active on Ukraine, to the extent that it seems as if it is working to provide a new background for Kerry's talks with Russian Foreign Minister Sergey Lavrov on the sidelines of the February 6-8 Munich Security Conference.

The Dynamics of American Engagement

In early 2014, the United States essentially plunged into the worsening Ukraine crisis, unequivocally siding with the anti-government protesters. After the regime change February 22, 2014, Americans offered Kiev’s new rulers political and economic support, along with international attempts to settle the crisis, including by co-initiating the April 17 talks involving Ukraine, Russia, the United States and European Union in Geneva.

Simultaneously, Washington put enormous diplomatic and economic pressure on Moscow, accusing it of undermining Ukraine's territorial integrity. Against this snowballing backdrop created with help of its European allies, last summer the United States effectively withdrew from international efforts to find a resolution.

Without U.S. support, Kiev could become more manageable, and without U.S. pressure the Europeans would likely be more constructive.

With tough, anti-Russian rhetoric firmly in place, the Americans met with Moscow’s representatives occasionally, but largely ceded the negotiating lead to Germany, France, Britain and the EU. Now, however, the United States seems more inclined to play a direct role in efforts to bring peace.

The ongoing aggravation of the Ukraine conflict appears to have prompted Washington to review its role in the issue, first through top-level and diplomatic contacts to consolidate the West vis-à-vis Russia. Tougher sanctions against Moscow were discussed mid-January in Washington with British Prime Minister David Cameron and EU High Representative Federica Mogherini, and again in late January in a phone-call between Barack Obama, François Hollande and Angela Merkel (1, 2, 3, 4). This issue also topped the agenda in Kerry's recent trips to Bulgaria, Sweden, and Latvia. 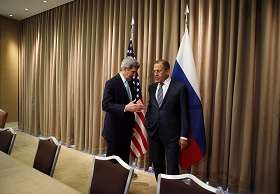 Kerry's visit to Kiev on February 5 also appears a sign of growing U.S. diplomatic engagement. According to the State Department, it is aimed to demonstrate U.S. solidarity with Ukraine’s government, and on January 24 and 28 Vice President Joseph Biden and Ukrainian President Petro Poroshenko had a phone call in which they agreed to meet at the Munich Security Conference (1, 2). Although U.S.-Ukrainian contacts were already quite frequent over the past year, there has clearly been an intensification in their activity.

Will Uncle Sam return to the negotiating table?

Since last November, Kiev has been trying to get Washington to return to the international settlement process (1, 2) mainly due to lack of progress in the "Normandy format" that involves Germany and France, and the continued erosion of the Minsk agreements. The de facto resumption of full-scale military operations is thwarting efforts for a ceasefire and direct dialogue between the conflicting parties. Hence, Poroshenko's January 25 statement proclaiming that he has allegedly persuaded Washington to join the "Geneva format" seems credible.

With state borders at a variance with ethnic and historical frontiers, Europe views the Ukraine crisis as something that could open Pandora’s box.

U.S. officials have not yet confirmed this information, but the chances of Washington's involvement in multilateral negotiations with Russia and Ukraine seem higher due to the U.S. greater overall engagement in the settlement process. The Munich forum will gather all interested parties and may offer an amenable forum for a meeting or at least for an agreement about meeting at a later date.

Kiev is lobbying for direct U.S. participation in talks with Russia in the hope of stronger support. As far as Moscow is concerned, it is unclear whether any such scenario would be helpful. Judging by the latest statements made by the Russian Foreign Ministry and Foreign Minister Lavrov's statements at the annual press conference on 2014, Russia remains rather cautious, choosing neither to reject nor to welcome the prospect.

Since last summer, the rationale behind Russia’s diplomatic maneuvering was led by the perception that the United States is its staunchest opponent in the Ukraine crisis. To this end, establishing a negotiating format that did not include it is posited on the idea that other Westerners would be more pliant. 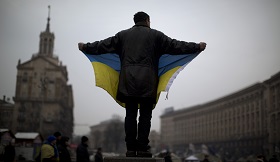 With U.S. interests extending across the globe, one could expect that, with time, Washington will switch its focus to regions of greater concern, such as the Middle East or East Asia. Without U.S. support, Kiev could become more manageable, and without U.S. pressure the Europeans would likely be more constructive.

Although this seems logical, these constructions collapse for two reasons. Despite all distractions and other priorities, the U.S. will not forget the Ukraine crisis and is keeping a close eye on events. Washington has regularly displayed symbolic support for Kiev, persuading its European allies to press on with sanctions and criticize Moscow. Recently U.S. rhetoric has grown even tougher and less tactful, and the charges have acquired a more personified character.

Moscow's attempts to launch a dialogue with the EU bypassing Washington failed to factor in Europe’s latent yearning to see Russia under sanctions and effectively opposed. The logic of containment in Russia-Europe economic ties definitely affects all decisions taken in Berlin, Paris and Brussels, driving them to caution in pressuring Moscow. At the same time, it would be foolish to underestimate the concerns of the EU, Russia's traditional partners included, about the principle of inviolability of borders in Europe. Having grown used to life in relative security, they fear a return to local conflicts and territorial disputes even more than does the United States. 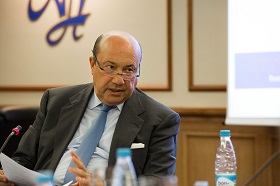 With state borders at a variance with ethnic and historical frontiers, Europe views the Ukraine crisis as something that could open Pandora’s box. To this end, EU policies are meant not only to counter Russia, a country portrayed as attempting to consolidate its sphere of interests and influence, but also to contain each other from similar temptations in future.

Besides, EU political and business elites seem eager to advance to Europe’s periphery, i.e. to Ukraine and its neighbors. During the past two decades, this kind of drive into Central and Eastern Europe has made integration more dynamic and competitive. Now, during the current crisis, there is a rising need for new markets and production capacities attached to the EU, which by no means opens the gate for Ukraine’s full-fledged membership in the elite group.

Since neither Washington nor Moscow has been successful in their strategies, there is a clear rationale behind direct U.S. involvement in the Ukraine consultations. President Obama's policy of delegated containment has failed to divert Russia from aiding the Donetsk and Lugansk breakaway republics. Further, the two entities recently secured significant tactical advances on the battlefield. In turn, Russia failed to launch negotiations between Kiev, Donetsk and Luhansk, and to bypass Washington in finding a settlement with Brussels.

U.S. presence in the consultations is sure to make them more difficult and competitive, but at the same time the talks would show the real limits of U.S. support for Kiev. Besides, the need to share responsibility for the outcomes could push Washington to practicable compromises. With the existing formats definitely slipping, Washington – Kiev’s major supporter – should come out of the cold and lay the groundwork for a more effective diplomatic settlement.

Rate this article
Share this article
FOLLOW THE LATEST DEVELOPMENTS
Project
Russia and the US: Problems in Bilateral Relations, Regional and Global Challenges
Tags
USA, Ukraine, Ukrainian Crisis
Reader's choice
HideShow
Ukrainian Crisis, Turkey and Eurasia: Who Wins?
Restoration, Reformation, Revolution? Blueprints for the World Order after the Russia-Ukraine conflict
U.S.: On the Way to Right-Wing Coup and Civil War?
The US Confiscation Policy
U.S. Plays 'Dangerous Game' in Trying to 'Cancel' Russia