The Middle East for Russia and the EU: Bone of Contention or Cause for Peace?

When the two leaders met on the sidelines of the G20 Summit in Hamburg, President of Russia Vladimir Putin and President of the United States Donald Trump discussed, among other things, the issue of establishing and enforcing the ceasefire in Syria, which came into being on July 9, 2017. The United States continues to be Russia’s key partner in resolving problems in the Middle East, despite the fact that the positions of Russia and the European Union on these issues are more similar to one another than those of Russia and the United States. Admittedly, the European Union is not an entirely independent actor in the Middle East. Though the United States continues to play a primary political role in the region, European Union does have economic and humanitarian instruments that could prove to be useful.

In early July, the Russian International Affairs Council (RIAC) and the Delegation of the European Union to Russia held an expert meeting to discuss the significance of the Middle East for Russia–EU relations: Is it a point of contention or an opportunity to work together at the local level? 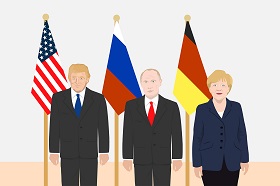 Vladimir Morozov:
Germany, the USA, and Russia in the Changing World

The EU countries have moved closer to reaching a consensus on Syria and the Middle East in general in recent months. Several experts in France have noted that Emmanuel Macron’s election as the country’s president has opened up a window of opportunity for cooperation with Russia in the Middle East. These conclusions are based primarily on the fact that Macron does not see the removal of Bashar al-Assad as a necessary precondition for working together. Holistically, given the realignment of political forces in a number of EU countries (the recent elections in France and the upcoming elections in Germany and the Netherlands), the situation could be used as a means to bring relations between Russia and the European Union to a new level, including but not limited to issues regarding the Middle East.

Looking at the Greater Middle East region as a whole, Russia and the European Union have similar interests in Afghanistan: both sides want to ensure security and stability in the country and crack down on the drug trafficking endemic. Presumably, cooperation on the issue of Afghanistan could lead to broader interaction between Russia and the European Union to resolve the overall situation in the Greater Middle East. Both sides believe that a purely military solution to the problem of Syria and Libya is impossible.

Having said that, there are still a number of obstacles standing in the way of full-fledged cooperation between Russia and the European Union. The issue of Ukraine, in particular, leaves a sour taste in the mouth as far as possible cooperation on the issue of Middle East settlement is concerned. What is more, the European side does not fully understand the logic behind Russia’s policy in the Middle East. Experts and politicians in Europe cannot quite figure out whether Russia wants to continue to be the “spoiler” of all the West’s endeavors (this is the prevailing stereotype in the West), or whether Moscow genuinely wants to play the role of “honest broker.” Similarly, given the fact that the European Union continues to depend on the United States in terms of its politics in the region, the somewhat confusing policies of President Donald Trump in this area create an additional uncertainty for both Russia and the European Union. The U.S. policy towards Iran will have a huge impact on how the situation develops.

It is clear that the situation in the Middle East can only be resolved through the participation of three sides – Russia, the European Union and the United States – in addition to regional actors. The search for a solution to the problem is under way at both the political and expert levels.

FOLLOW THE LATEST DEVELOPMENTS
Project
Security System in the Middle East
Reader's choice
HideShow
South Korean Arms for Canada and Poland: NATO’s Reserve Arsenal for Ukraine?
Does Syria’s Road Back to the Arab Family Go Through the UAE?
The Distributed World
Karabakh in Crisis: Toward a New Road of Life
Bargaining Items