RIAC Vice-President, President of the Institute of Oriental Studies of the Russian Academy of Sciences

The Syrian crisis continues to occupy a central place in world politics, even as the events in Ukraine have become the primary focus. The presidential elections in Syria will essentially change nothing: their easily predictable results will confirm the legitimacy of the rule of Bashar al-Assad for those who recognize it, and serve as a bone of contention for those who consider his rule illegitimate.

The Syrian crisis continues to occupy a central place in world politics, even as the events in Ukraine have become the primary focus. The presidential elections in Syria will essentially change nothing: their easily predictable results will confirm the legitimacy of the rule of Bashar al-Assad for those who recognize it, and serve as a bone of contention for those who consider his rule illegitimate. There is nothing contradictory in the fact that, as Russian officials have stated, while Moscow does not personally support Bashar al-Assad, it does support the elections going forth with his participation. This line of argument, in respect to the elections, is held by Russia and its allies (as far as can be judged) because it will preserve Syrian governmental institutions and prevent the formation of a legal vacuum. Both of these could lead to utter chaos in this country and the domination of terrorist and extremist groups, not to mention the inevitable destabilization of neighbouring states.

Of course, there is the danger that after the removal and destruction of Syria’s arsenal of chemical weapons and their means of production, Washington will be tempted carry out attacks on the country in the form of bomb strikes. American analysts are already writing that neither Syrian air defences, which include 22 early warning stations and about 130 sites for air defence systems, nor Syrian aircraft, represent insurmountable obstacles for such strikes. Is this what is being counted on by those pushing forward for this plan? And will Obama, who is increasingly coming under criticism in the United States for showing weakness, adhere to the principles that Secretary of State John Kerry agreed upon with Minister of Foreign Affairs of the Russian Federation Sergey Lavrov on May 7, 2013? One of the points of their agreement was the fact that the Syrian crisis does not require a military solution, but rather a diplomatic one. Of course, for this to happen, it would be necessary for Russia and the United States to work together, but will the anti-Russian politics that our partners are carrying out (more aggressively than ever after the Ukrainian crisis) interfere? 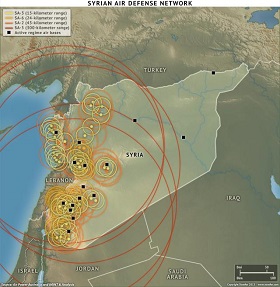 Moscow’s commitment to a course of Geneva talks speaks to the consistency of Russian politics. However, a third round has not yet started. Differences persist between the parties as to what should be on the agenda (although it seems to have already been agreed upon). It has not been possible to form a more representative delegation of the opposition at these talks. Both sides of the conflict hold illusions that a military solution will decide the issue in their respective favour. If this is the case, then why negotiate? Opposition leaders are demanding shipments of ever more dangerous weapons, including anti-tank and anti-aircraft missiles, from external sponsors.

Previously, the United States decided against arming the opposition with such weapons, rightly fearing that they could fall into the wrong hands and even eventually, as has happened many times, be used against the United States and its allies. However, Syria has now seen the emergence of a group beloved by the Americans, the Harakat Hazm (the Steadfastness Movement). In the second half of April, global media sources reported that more than 20 BGM-21 Tow wire-guided portable anti-tank missile systems were transported in early March via Turkey and Jordan to Syria into the hands of this group, which is a part of the Free Syrian Army (FSA). Harakat Hazm militants have undergone special training in order to handle these types of weapons. The news agency RIA Novosti, citing the fact that these supplies are part of a “pilot project,” states that in the future supplies of modern weapons to rebels will be expanded. During the next stage, they will likely be supplied with anti-aircraft missiles. Nevertheless, government troops pushed out the opposition on all fronts, winning back their city. However, it is too soon to call this a full military victory and say that they have regained control over the country. Armed opposition groups in Syria continue to fight among themselves. The fighting is between secular nationalists like the FSA on the one hand, and radical Islamist groups on the other, with two groups affiliated with al-Qaeda also taking part in the fighting: the terrorist organizations Jabhat en-Nusra and the Islamic State of Iraq and the Levant (ISIL). In the South, the rebels who belong to Jabhat en-Nusra are acting in alliance with FSA forces, which makes it particularly difficult for government forces to establish control over the territory.

After the overthrow of President Mohammed Morsi in Egypt, organizations associated with the Pan-Arab movement such as the Muslim Brotherhood (including outside of Egypt), experienced great difficulties. The Egyptian government has not only ceased to provide any support to that movement, but has even included it on its list of terrorist organizations and launched a massive campaign of repression against the leadership and its members. Saudi Arabia followed Egypt and included the Muslim Brotherhood on its list of terrorist organizations, and the United Arab Emirates and Kuwait intensified action to oust it from the political arena. This dramatically weakened the Muslim Brotherhood among Syrian rebels, where they (or at least a considerable part of them) act as allies with the secular nationalists and participate in the struggle against the regime and terrorist groups associated with al-Qaeda. 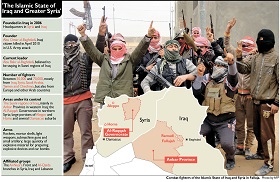 www.haaretz.com
Terrorist organizations Jabhat en-Nusra and
the Islamic State of Iraq and the

The position of the ISIL in Syria was shaken after Saudi Arabia took a tougher stance against the organization. On May 6, 2014, the country’s Ministry of Interior announced the existence in Saudi Arabia of a new al-Qaeda terrorist group that is part of the ISIL. Sixty-two people were arrested, most of them Saudis. It is possible that they are coordinating their activities with a very strong Yemeni cell of al-Qaeda in the Arabian Peninsula. Apparently, Riyadh was first really convinced that ISIL was a dangerous enemy when his fighters begun waging a war not only against Assad and Nouri al-Maliki, but also against the House of Saud. According to Arab analyst Abdel Majid Al-Balawi, Saudi Arabia’s Syrian policy will follow two parallel lines: counter al-Qaeda and all its subsidiaries, and support “moderate” armed opposition groups to put pressure on Assad and force him to transfer power. Combining these two lines will be difficult, because as the analyst emphasized, “The moderate armed groups in Syria are no more moderate than the Muslim Brotherhood, which the Saudi government classifies as a terrorist organization along with the ISIL and Jabhat en-Nusra.”

There is a new phenomenon in the Syrian crisis, namely the practice of local pacification. Russian diplomacy regards this as an important prologue to a subsequent comprehensive ceasefire. Our diplomats have made great efforts to ensure that the Syrian government and the opposition have agreed on humanitarian access and the evacuation of civilians from areas that are occupied by militants and blocked by government troops. One of the earliest examples of such local pacification took place in the city of Homs in February of this year. It should be noted that the assessment of this process by Lakhdar Brahimi, who resigned in May as UN Special Envoy for Syria, differs slightly from the Russian assessment. The former envoy said in particular, “This is part of an ongoing war; it is not the beginning of a peace process.” The disappointment of the Algerian diplomat, whose efforts were well appreciated in Moscow, is completely understandable. 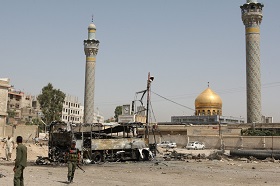 It is also clear that the humanitarian component of the Syrian tragedy requires an immediate solution. This issue should be first on the agenda at the third round of Geneva talks, but already today much is being done to help Syrian citizens and refugees in neighbouring countries. Russian humanitarian aid is being sent by Ministry of Emergency Situations’ planes. However, it will only be possible to solve this problem when the violence comes to a stop and the Syrians are able to return to their homes. No country can regularly host such a large number of immigrants. That’s not even the issue here. However, even under the most optimistic scenario, the restoration of Syria, much of which lies in ruins, and a return to normalcy for its citizens will only come through a consolidated international effort.

The situation in the countries neighbouring Syria, where hundreds of thousands of refugees have fled, is critical. For example, the number of Syrian refugees in Jordan (officially registered by the Office of the UN High Commissioner for Refugees) has exceeded 600,000, of which about 125,000 live in two major camps. If Damascus, inspired by military successes in other areas, begins a massive operation in the south, this could be particularly bloody and would create a new exodus of Syrian refugees. Immigrants from the region of Daraa are especially feared (this is where the protest movement began in 2011). It is currently under the control of Islamic radicals. However, this is not the only problem. The fact is that in addition to the sheer number of people, there would be a huge number of undocumented people in Jordan from the neighbouring country. According to figures cited by local press sources, the total number of Syrian refugees in Jordan is approaching a million and a half people. Andrew Tabler of the Washington Institute for Near East Policy refers to the 750,000 Syrian immigrants as “known unknowns.” Indeed, no one knows what these people represent, but one thing is clear: they can be manipulated by a variety of parties in this conflict, including those who want crisis to break out in Jordan.

Today, the majority of analysts, even those with different orientations, are in agreement when it comes to the fact that Assad, it seems, will remain in Syria. Those who think otherwise have their own biases. For some, it is an issue of their convictions. For others, it is an issue of faith. For others, it comes down to policy. And lastly, there are those who think so out of pure self-interest. As Upton Sinclair once said, “It is difficult to get a man to understand something when his salary depends on his not understanding it.”

Assad will remain and perhaps will do so for a long time. However, the devil, as always, is in the details.

Rate this article
Share this article
FOLLOW THE LATEST DEVELOPMENTS
Project
Security System in the Middle East
Tags
Terrorism, Elections, Syria, Bashar al-Assad, Refugees
Reader's choice
HideShow
Does Syria’s Road Back to the Arab Family Go Through the UAE?
Unprecedented Sanctions? By No Means
Bargaining Items
The Year 2023: A Feast of Common Misfortune