Notwithstanding the multitude of dire predictions about the decline of Russian arms exports, Moscow is building up its military-technical cooperation with foreign partners, firmly holding onto second place among global arms exporters. In 2013, sales of Rosoboronexport, Russia's sole vendor of defense items, reached USD 13.2 billion, with the United States leading the way with USD 23.6 billion and France trailing in third with USD 6.9 billion. In 2012, both the sales numbers and the ranking of exporters were almost identical.

Notwithstanding the multitude of dire predictions about the decline of Russian arms exports, Moscow is building up its military-technical cooperation with foreign partners, firmly holding onto second place among global arms exporters. In 2013, sales of Rosoboronexport, Russia's sole vendor of defense items, reached USD 13.2 billion, with the United States leading the way with USD 23.6 billion and France trailing in third with USD 6.9 billion. In 2012, both the sales numbers and the ranking of exporters were almost identical.

The standards of international military-technical cooperation acquired in the late Soviet and then post-Soviet periods enable us to outline Russia's several key strategies for cooperation with different partners.

Although the most time and effort intensive of all the strategies, license transfers with the occasional joint development of military hardware offer the highest payback in terms of stability and political dividends. Currently, Russia is using this strategy to its full extent only with India with regards to large contracts, for example, over the licensed manufacturing of Su-30MKI fighters: there have been contracts for 140 aircraft in 2000 and two additional contracts for 40 and 42 aircraft, as well as purchases of fully assembled jets. In early 2013, Delhi had about 170 Su-30MKI fighters delivered from Russia, either ready-for-use or assembled on-site from pre-shipped parts [1]. The total cost of the Su-30 aircraft delivered to India is estimated at USD 12-15 billion including spares, servicing, pilot training, etc. (1, 2) 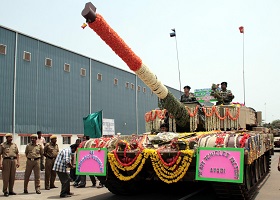 The second area of cooperation concerns the T-90 tank. From 2001 to 2007, Russia and India contracted for the delivery of almost 2,000 T-90s worth about USD 6 billion, of which 1,700 vehicles were to be assembled in India from Russia-supplied parts sets, and the rest delivered ready-made. Today, Indian armed forces possess about 800 T-90 tanks, with about a half assembled in the country. At that, the locally made tanks are increasing in number, as the output of the HVF (Heavy Vehicles Factory) state enterprise is reaching 140 units a year.

As a matter of fact, the licensed production of military hardware from pre-shipped parts sets was used back in the Soviet period, as India was provided with T-72 tanks, MIG-27 fighter bombers and other weaponry.

Most notable among jointly developed weapons projects appears to be the contracts for PJ-10 Brahmos cruise missiles in 1998 and the FGFA fifth-generation fighter in 2007. Both of them are based on Russian prototypes, i.e. the P-800 Onyx missile and the T-50 fighter. Whereas in 1997 Onyx was in trial operation, at the time of the contract signing, the FGFA existed only as a set of mockups and separate elements. Its maiden flight took place in January 2010.

Although the most time and effort intensive of all the strategies, license transfers with the occasional joint development of military hardware offer the highest payback in terms of stability and political dividends.

The two sides are currently working together on the MTC/MTA multirole transport aircraft and also dynamically advancing cooperation in the naval sphere. Examples include the November 2013 handover to India of the aircraft carrier Vikramaditya after a lengthy period of upgrading, the lease of the Project 971I Chakra nuclear submarine refitted to Indian requirements, the late October 2013 basic agreement on the completion of one more submarine of this type, the series construction of Project 11356 frigates, etc.

In all of the above-mentioned cases, India and Russia are pursuing their own interests. India poses as a donor, whose investments markedly accelerate the production, prop up the factories and provide the sellers with a foreign market. In turn, Russia provides high-tech in areas where India is decades behind the world leaders. 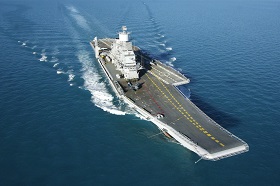 Russia is also using or trying to use this military-technical cooperation strategy toward China, Brazil and South Korea, each country featuring targeted specifics. China was increasingly making weapons under Soviet licenses and sometimes through bootlegging in the 1950s-1980s, but after normal relations with Moscow were reinstated, Beijing resumed buying Russian technologies to upgrade its defense sector. However, the Chinese rapidly switched from licensed to independent production on the basis of these obtained models. Sometimes, imitations were made easier through technological assistance from the Russian and Ukrainian design bureaus, which in 1990-2000 were effectively unemployed. Actually, this was the case with the J-11 and J-15 fighters, Y-20 transport aircraft, HQ-9 anti-aircraft missile systems and several other systems. At the same time, Chinese imitation efforts are still unsuccessful in terms of advancing hardware. Hence, China may as well renew its interest in advanced Russian models that are becoming available because of the generational change in weapon systems manufactured by the Russian defense industry. The first signal appears to have been the Chinese interest in the Su-35S fighter, i.e. the most advanced version of the T-10 (Su-27) platform.

The second strategy is intended for the large number of relatively prosperous countries that can afford to pay for military hardware. These countries purchase modern systems or their simplified versions.

South Korea predominantly relies on the joint development of new hardware with the participation of Russian design bureaus, which has given life to the KM-SAM air defense missile system and the Naro-1 (KSLV) carrier rocket. In both cases, there were no working prototypes in early 2000s when the work began. The Russian side – respectively Almaz-Antey Concern and Khrunichev Research and Production Center – have used the contracts to improve their advanced systems, i.e. the Vityaz air-defense system and Angara carrier rocket.

As for Brazil, Russia is trying to spark interest in the joint development of combat aircraft and surface-to-air missile systems. Should this happen, a group of industrialized countries may emerge which employ Russian designs for creating their own military hardware, which should make the Russian defense sector considerably more secure in the most significant and high-tech-oriented segment. 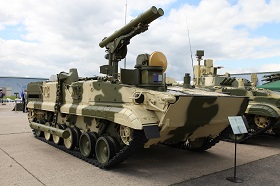 The second strategy is intended for the large number of relatively prosperous countries that can afford to pay for military hardware: for example, Indonesia, Malaysia, Vietnam, Algeria, Iraq, Venezuela, Azerbaijan and others. Normally, these countries provide Russia with quite lucrative contracts – USD 7.5 billion with Algeria, over USD 5 billion with Vietnam, and over USD 4 billion with Azerbaijan. These countries purchase modern systems or their simplified versions (Su-30MKI(a), MKM or MK2 fighters, t-90S tanks, MI-28 and MI-35M helicopters, etc.), giving Russia an aggregate export portfolio on par with the Chinese and Indian mega-contracts in the 1990s-2000s.

Military-technical cooperation along these lines often seems dubious because of the political risks. The Arab Spring has caused many pundits to think of an imminent end to cooperation with the Middle East countries, while the demise of Hugo Chavez has raised doubts about ties with Venezuela. However, with time these concerns have turned out to be exaggerated.

The third Russian strategy in military-technical cooperation is aimed at developing countries. As a rule, these countries sign one-time and relatively cheap contracts from several million to several hundred million dollars.

Concerns about drops in Russian military exports to the Middle East have been illustratively alleviated by the fall 2012 contract for the supply of helicopters, air defense and other weapon systems worth USD 4.2 billion to Iraq. Shipments under this agreement began in the fall of 2013, and at about the same time, military-technical cooperation with Libya resumed with the delivery of the Chrysanthemum self-propelled anti-tank complexes ordered by the Kaddafi regime (according to some data, BMP-3 infantry combat vehicles). The Syrian government will definitely buy new modern Russian hardware, while the Russia-U.S.A. freeze has opened the way to resumed arms sales to Iran. Notably, the United States may respond to resumed Russia-Iran cooperation less painfully than five to seven years ago because of the new Iranian government and its worsening relations with Saudi Arabia. 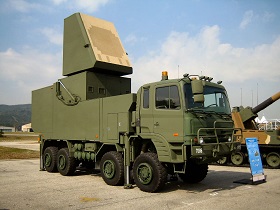 Finally, the third Russian strategy in military-technical cooperation is aimed at developing countries, mainly the poor and medium-tier states of Africa, Latin America and Southeast Asia. As a rule, these countries sign one-time and relatively cheap contracts from several million to several hundred million dollars.

However, some agreements are also quite rewarding, for example the October 2013 contract with Angola for the delivery of weapons worth USD 1 billion, including spares for Soviet-made systems, firearms, ammunition, tanks, artillery and MI-17 multirole helicopters. The sides also agreed on the construction of an ammunitions factory and the delivery of 18 repaired and armed Su-30K fighters previously owned by the Indian Air Force and shipped to India under a 1996 contract. The agreement foresaw the handover of Su-30MKI fighters, but in 1997-1999 it was mutually agreed to replace them with the simplified K-version to be later substituted by the more advanced MKI aircraft. Later, Russia provided India with 18 Su-30MKI jets with simultaneous formal retaking of the Su-30Ks, which remained in Indian armed forces until July 2011.

This contract appears to quite accurately reflect the content of most agreements with developing countries, including Russia's less developed CSTO partners like Kyrgyzstan and Tajikistan, who buy spares, firearms, ammunition, armored vehicles (usually after repairs and use by Russia's Armed Forces), and second-hand aircraft. The only exceptions are helicopters and vehicles that are predominantly new. 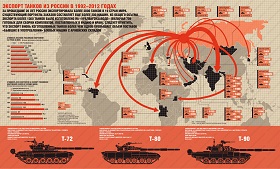 As far Angola is concerned, its strong economic growth and rising defense spending may elevate it to a second-strategy country if Luanda chooses to further military-technical cooperation with Russia. For the time being, the third-category countries are most numerous, i.e. totaling about two-thirds of the over 70 countries covered by Rosoboronexport. However, they provide relatively low annual revenues – 10 to 15 percent of the total gross revenue. The group is also known for frequently politically motivated deals, primarily with the above-mentioned CSTO member, for whom Moscow's military assistance means a guarantee of stability and survival of the regime.

These strategies of military-technical cooperation demonstrate the variety of tools Russia employs to extract profit and strengthen its political clout, although the intentions may vary from offering support to its allies as is the case with the CSTO and securing new and old markets to building up regional influence (Venezuela, Angola) and maintaining and strengthening relations with strategic partners like India.

Depending on the partner's capabilities and significance, Russia may vary the forms of cooperation, including assembly and servicing on the customer's territory bearing in mind the risks of technology leakage. Only highly industrialized countries can quickly replicate modern combat hardware, among them Russia, the United States, certain NATO members who never buy Russian weapons, and China. On the whole, a technology leak may be safely prevented through the lagging export strategy that implies the sales of predominantly previous-generation items against those supplied to the national armed forces. Successfully employed by the USSR, the strategy is being virtually revived in Russia, whose defense industry is organizing the production of next-generation weapons and equipment for its Army, Navy and Air Force.