Russia and Latin America in the Context of the Ukrainian Crisis

Doctor of Political Science, Deputy Director of the RAS Institute of Latin America

The reaction across Latin America to events in Ukraine and Crimea was expected, since most countries in the region consider the principle of territorial integrity a kind of “sacred cow.” Over two centuries this principle has become deeply rooted in both the political culture of the ruling elites and collective consciousness.

The reaction across Latin America to events in Ukraine and Crimea was expected, since most countries in the region consider the principle of territorial integrity a kind of “sacred cow.” Over two centuries this principle has become deeply rooted in both the political culture of the ruling elites and collective consciousness.

Endless revision of borders in the nineteenth century, a dense network of territorial disputes that criss-cross the region and have entered an active phase periodically in recent years predetermine the particular importance attributed to issues of territorial integrity. In addition, Latin America has repeatedly faced direct annexations of parts of some countries by other states.

Even before the referendum in Crimea, Mexico, Costa Rica and Panama made their first statements on the issue.

On March 4, 2014, Mexico’s Foreign Affairs Ministry expressed deep concern over events in Ukraine and the Autonomous Republic of Crimea, exphasizing the need to respect Ukraine’s territorial integrity. At the same time, it called on the Ukrainian authorities to ensure the safety and rights of all the country’s ethnic groups. Mexico's position has been largely determined by its past. It is worth recalling that, in the nineteenth century, the United States annexed approximately half of Mexico’s territory (today Texas and other states of the American Southwest). Of course, all this is deeply engraved in Mexicans’ historic memory.

The same is true for Panama, which, like Mexico, has condemned Russia’s annexation of Crimea. The acquisition of some of that country’s territory (Canal Zone) by the United States more than a hundred years ago, over which Panama restored sovereignty only on December 31, 1999, could not but tell on its attitude towards the Crimean issue.

Costa Rica was the third country to voice sharp criticism of Russia in connection with the developments in Crimea. Its reaction could be prompted by an ongoing territorial dispute with Nicaragua over rights to an unnamed island in the San Juan River that flared up a few decades ago (its fairway forms the border between the two states) and where Nicaraguan troops are stationed. 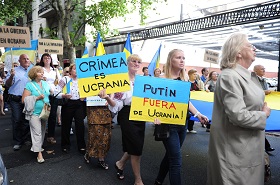 On March 15, 2014, in the UN Security Council Argentina voted against recognizing the results of the referendum in Crimea. It is worth noting that, in 1833, the UK annexed the Falkland Islands (Islas Malvinas), and in 2013 London held a referendum among the inhabitants of the islands about whether they wanted to remain under the jurisdiction of the British Crown, which was somewhat dubious in terms of international legitimacy.

During her visit to France shortly after the Security Council vote, Argentina’s President Cristina Fernández de Kirchner surprised many by disavowing the position of the country’s UN representative. “Many of the major powers, which have secured the Falklands’ people right to self-determination, do not want to do the same in relation to the Crimea now. How can you call yourselves guarantors of world stability, if you do not apply the same standards for everyone? It looks like the Crimeans cannot express their will, but the residents of the Falklands can. There is zero logic in that,” the President said.

Russia's position was supported unreservedly by Cuba, Venezuela, Nicaragua and Bolivia. In their statements they emphasized that it was the West, namely the United States, France and Germany, that provoked an acute crisis and violence in Ukraine. Developments in the country were compared to the development of similar events in Libya and Syria. Ukraine's new government was deemed illegitimate, accused of plotting a wave of violence and fundamentally unable to secure the country’s territorial integrity.

Right after the vote in the UN General Assembly, President of the Republic of Ecuador Rafael Correa made ​​a statement (the country’s representative made no pronouncement on the vote). He said he considered Ukraine’s current government illegitimate, that his country refused to engage in any dialogue with it, and would only recognize the government elected by the people.

Some states and international experts expressed no clear position on the Ukrainian issue. The absence of official reaction of Brazil’s government to events in Ukraine and around Crimea was mainly a function of the fact that its foreign policy is built on extreme respect for the principle of non-interference in internal affairs and a rather “cool” attitude to the principle of self-determination of peoples and nations. Moreover, in the early twentieth century, Brazil was repeatedly faced with various manifestations of separatism in its southern states, predominantly inhabited by the white population. 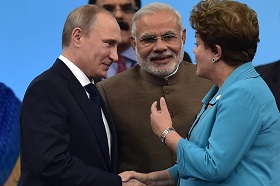 Against this background, President Vladimir Putin’s visit to Latin America in July 2014 for the BRICS summit in Fortaleza (Brazil) was more than timely. In their comments, politicians and local media emphasized two key points: the visit had obvious geopolitical implications; and it made a real contribution to promoting Russia’s economic interests in the region.

In terms of geopolitics, the visit greatly expanded the scope of foreign policy cooperation between Russia and the countries of Latin America against a backdrop of the country’s growing isolation from the West. President Putin managed to either win support for Russia's position in Ukraine from most of the region’s leaders or make them condemn the sanctions imposed by the United States and its allies.

The Russian President's visit gave renewed impetus and relevance to the alliance of emerging powers. It is no secret that many experts were skeptical about it, regarding it as a mere platform for diplomatic rhetoric and noting the lack of practical solutions produced in the more than five years of its existence. The concrete decision, taken in Fortaleza, to establish the BRICS Bank with multibillion capital and a reserve fund testifies to the fact that the architecture of the global economy is on the verge of a major change. This is exactly what Vladimir Putin has been working to achieve.

In general, the Russian President’s visit provoked a great deal of positive responses on the continent. Thus, international observer Carlos Santa Maria (Argentina) in his article under the catchy headline “Putin in Latin America: Transnational corporations shudder?” notes the historic nature of this trip. He says that Putin has laid the foundations of a new phase in relations with the countries of the region, one that is built on a shared vision of a multipolar world order. Carlos Santa Maria emphasized that the Russian President's visit strengthens the sovereignty of Latin American countries, while also providing guarantees for their independence and non-interference in their internal affairs and against military coups. Dealing a severe blow to unipolarity, it opens up opportunitiers for the formation of new international alliances, which could substantially democratize the existing world order. 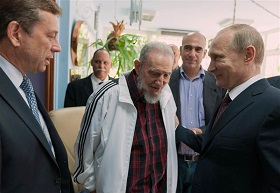 First, Vladimir Putin's visit considerably expanded the remit of interaction with the leaders of Latin American countries and revealed more issues on which their positions coincide (it is quite telling that both sides used the term of strategic partnership). Second, the visit promoted Russian economic interests in the region. Nearly all participants of Vladimir Putin’s meeting with the leaders of the Union of South American Nations (UNASUR) put forward concrete proposals for cooperation, maily in high-tech industries. Furthermore, the meetings have noticeably strengethened the political prestige of Latin American countries, which have displayed their ability to act independently and ignore the unfavorable international situation created around Russia by the United States and its Western allies.

Finally, the embargo imposed by the Russian government in early August 2014 on the imports of some food products and raw materials from those Western countries that imposed sanctions on Russia provides ample opportunities for a number of countries in Latin America to fill the niche and thereby also improve their own economic position. According to the forecast produced by the Inter-American Development Bank, in 2014-2015, their growth is expected to slow to an average of just 2 percent.

It is possible that certain countries in the region, acting with an eye on the United States and the European Union, will try to take advantage of these favorable market conditions and increase prices on food supplied to Russia. However, if in so doing they seek to improve their international prestige, they are unlikely to attain this goal.

It is worth noting that the day after the Russian Agriculture Ministry announced the embargo, Rosselkhoznadzor (the Federal Service for Veterinary and Phytosanitary Surveillance) met with ambassadors of a number of South American countries to discuss practical issues relating to increasing food deliveries to Russia.

Rate this article
Share this article
FOLLOW THE LATEST DEVELOPMENTS
Tags
Russia, BRICS, Latin America, Sanctions, Ukrainian Crisis
Reader's choice
HideShow
A Non-Alarmist Forecast for 2022
Results of 2021: Sanctions Policy
The Vertical World: An Interview with Abishur Prakash
Russia’s foreign policy performance in 2021
How to Put Out the "Resonance of Instability"?