South Korea held legislative elections to its National Assembly on April 13, 2016. All the headlines spoke of – even in the conservative press – was the complete and total failure of the ruling party. Not only had it lost out to the opposition in terms of the total number of seats, it had also lost its majority in parliament. All this means that in her final year as President, Park Geun-hye will have to work with a less-than-friendly parliament.

South Korea held legislative elections to its National Assembly on April 13, 2016. The Minjoo Party of Korea secured the majority of votes in 110 single-member constituencies, with the ruling Saenuri Party earning 105 seats, the People’s Party 25 and the Justice Party winning in two districts. Independent candidates won a total of 11 seats in the National Assembly. Thus, 253 of the 300 of the parliamentary seats were decided according to the voting results of the single-member constituencies. The remaining 47 seats are distributed according to party-list proportional representation. In total, the Minjoo Party of Korea received 123 seats in parliament, beating out the Saenuri Party (122), the People’s Party (38), the Justice Party (6) and the independents (11).

There was a certain amount of intrigue before the election even took place. Most pre-election polls had the ruling Saenuri Party as the frontrunner, and the government tried to make the campaign a hotly contested one, which included playing the North Korean card. Even when the votes started to be counted, it seemed that the Saenuri Party was leading in absolute terms, despite the fact that the two main opposition parties were gaining ground. When all was said and done, however, all the headlines spoke of – even in the conservative press – was the complete and total failure of the ruling party. Not only had it lost out to the opposition in terms of the total number of seats, it had also lost its majority in parliament.

There was a 58 per cent turnout for the election (3.7 per cent higher than the previous elections in 2012), which speaks to the political engagement of the South Korean people and the desire to use the elections as a tool for changing the balance of political forces in the country. At the same time, we have to keep in mind that South Korea is a presidential republic where the head of state has extremely far-reaching powers. So we shouldn’t expect changes in the country’s politics any time soon. Nevertheless, the results of the legislative elections allow us to make some predictions about what will happen in the presidential elections next year, assuming that a force majeure event does not occur in the meantime.

Both the left and the right experienced dissension in the ranks before the elections. Formally speaking, the left-wing Minjoo Party (the main opposition party in the country) became embroiled in a factional conflict that resulted in the creation of a number of splinter groups, most notably Ahn Cheol-soo’s People’s Party. Despite this, the Minjoo Party nevertheless managed to secure a large number of votes and thus demonstrate its dominance in Seoul (at least one third of the South Korean population lives the Seoul Capital Area).

The positions of the “euro-socialists” from the Justice Party are weak, but they did manage to retain their seats in parliament, despite the fact that the party emerged from the embers of the banned Unified Progressive Party. Significantly, the Justice Party received more seats as a result of proportional party list voting than the regular voting. 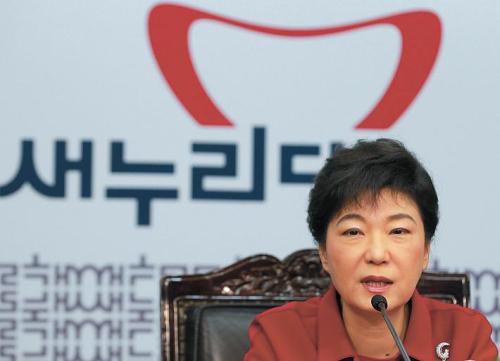 www.koreaherald.com
President, Park Geun-hye will have to work with
a less-than-friendly parliament

The situation in which Ahn Cheol-soo found himself as a result of the elections is rather curious. Through his election campaign and his political manoeuvres, Ahn Cheol-soo had tried to position himself as the third power in the country, one that could move between the conservatives and the democrats. Guided by this goal, he deliberately caused a split within the Minjoo Party. However, he was left with an electoral base made up of democrats who are clamouring for change and who are dissatisfied with the stagnation within the party. In terms of electoral geography, his victory is clearly linked to the South Jeolla Province, which has always been a hotbed of resolute and hard-nosed opposition. Whether or not the populist Ahn will be able to make allowances for those who did vote for him remains to be seen.

The factional conflict that engulfed the right-wing Saenuri Party did not lead to a split, but rather to a number of members of parliament whose names had been removed from the party lists leaving the Party and running as independent candidates. It is also worth noting that independent candidates won seats in regions that are traditionally considered to be within the “zone of influence” of the conservatives.

What is more, the economic difficulties that the country is experiencing, coupled with the offensive launched by the Conservatives, had a greater impact on voters than playing up the threat from North Korea did. Despite the fact that the topic of North Korea loomed large over the entire election campaign, and that news of a number of scandals related to the country were held back until the elections had rolled around, the South Korean population did not seem particularly worried about the prospect of conflict breaking out with their neighbours to the north.

It is the domestic problems in South Korea, which in large part have to do with Park Geun-hye’s not entirely successful attempts to build a social state, that had a far greater impact on how the people voted in the elections. The fact that the majority of people in Seoul voted for the Democrats is evidence of this. This has not happened for a long time. And the Party’s Chairman, Kim Moo-sung, who had long been considered the most likely candidate for President of South Korea, resigned instead.

The failure of right-wing organizations that occupy a marginal position within the government and have close links with protestant sects to win a single seat in the elections is equally noteworthy.

All this means that in her final year as President, Park Geun-hye will have to work with a less-than-friendly parliament. This will weaken her political influence, even if we do not take into account the fact that the final twelve months of her five-year non-renewable single term in office will go down as a “lame duck” year.

To be sure, the Saenuri Party suffered a defeat in the elections. But it is unclear whether they can be considered a success for the left, which is still searching for a truly competent and influential leader. What is more, the ability of the three parties to work together constructively is limited.

As a result, the current makeup of the current parliament is not entirely conducive to constructive political governance. In the past, factional struggles caused the left to effectively torpedo any initiative led by Park Geun-hye, even if they could be considered constructive in nature. So we can expect the work of the South Korean Parliament to become even less effective, while the influence of the People’s Party an of the independent members of parliament will only grow. What is more, the two main parties could very well become engaged in a fierce struggle for their votes, and thus a majority within parliament.

The results of the legislative elections on South Korea also give us cause to believe that, assuming nothing sensational occurs (such as current Secretary-General of the United Nations Ban Ki-moon throwing his hat into the ring for president), there is a distinct possibility the Conservatives may win the presidential election next year as a result of the schism that exists in the left-wing camp and the fact that the left seems incapable of deciding upon a single leader, despite the fact that Minjoo Party of Korea secured the majority of votes.