CSTO: a Time for Public Diplomacy?

PhD in Political Science, associate professor at the School of World Political Processes, research associate at the Center for Post-Soviet Studies, MGIMO University

The summit of the Collective Security Treaty Organization (CSTO) took place on 15 September 2015 amid the Center–2015 Russian military exercise, the year’s most massive event of its kind, which focused on combat against illegal armed groups in the Central Asian dimension. The main theme of the maneuvers was due to predictions that the situation in Central Asia and Afghanistan may deteriorate. The potential for aggravation in Central Asia is now measured not only by the situation in Afghanistan, which has constituted a threat to neighboring countries over the past 20 years. A new factor needs to be reckoned with — IS.

The summit of the Collective Security Treaty Organization (CSTO) took place on 15 September 2015 amid the Center–2015 Russian military exercise, the year’s most massive event of its kind, which focused on combat against illegal armed groups in the Central Asian dimension. The main theme of the maneuvers was due to predictions that the situation in Central Asia and Afghanistan may deteriorate. The Central Asian nations are well aware of this threat and make a point of potential assistance from the CSTO. In the course of the summit, President of Kazakhstan Nursultan Nazarbayev outlined the need for increasing the efficiency and combat capabilities of the Collective Rapid Reaction Force (CRRF) and commended the battle readiness of the Force, which was surprise-tested in May 2015, when contingents from the CSTO member states were moved to Tajikistan within only two days. The unscheduled check was designed to build up the CRRF’s crisis-response capacity. Anyway, when a crisis was triggered by attacks on law-enforcement officers and Defense Ministry employees ahead of the summit in Tajikistan, the local administration refrained from asking for assistance from the CSTO. In July 2012, Tajikistan conducted a special-forces raid in Gorno-Badakhshan on its own as well.

At the same time, the potential for aggravation in Central Asia is now measured not only by the situation in Afghanistan, which has constituted a threat to neighboring countries over the past 20 years. A new factor needs to be reckoned with — IS, which is now joined by citizens from Central Asia and Russia. In this context, experts expect possible aggravations once these people come back home. Vladimir Putin mentioned combat against IS in his speech at the CSTO summit, which was largely focused on the Syrian crisis and creation of an international anti-terrorist coalition. Previously, in November 2014, CSTO Secretary General Nikolay Bordyuzha said that the international anti-terrorist coalition that was established after the September 11 attacks was compromised because of “personal ambitions of some leaders”; whereas NATO and the United States virtually ceased their cooperation with Russia in this area, one possible reason being discrepancies as to the resolution of the Syrian conflict and the Ukrainian crisis. 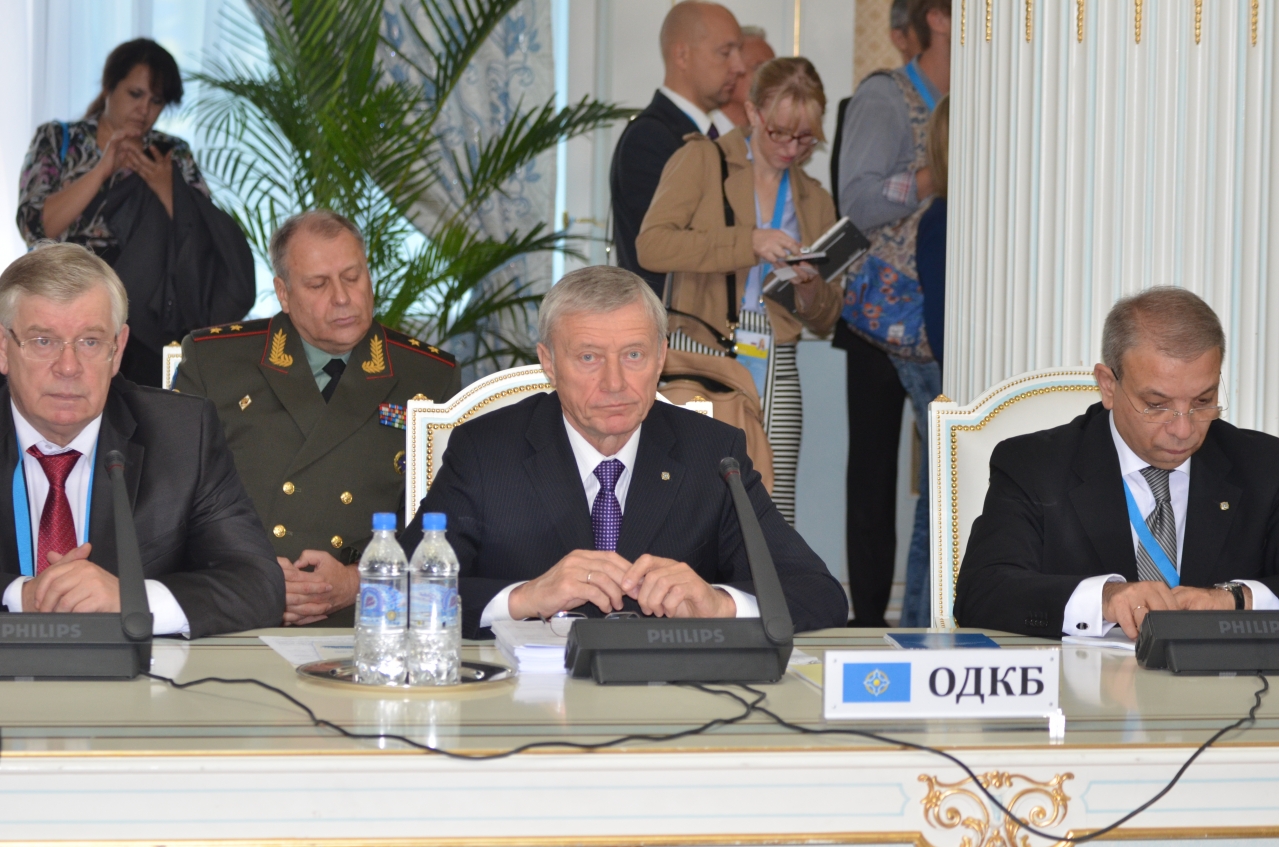 However, there is obviously more to Russia’s collaboration with the U.S. than being sorry about the differences with the West over approaches to settling the Syrian dispute: in June 2015, President Putin proposed a plan for the creation of a regional anti-terrorist coalition to fight IS, but as early as September, consultations on this issue were held with American colleagues. At the CSTO summit, Vladimir Putin gave a clear signal that Russia was ready to work together with the West provided that they “put aside their geopolitical ambitions, give up on so-called double standards and the use — both direct and indirect — of some terrorist groups to achieve their opportunistic goals, including the change of governments and regimes that someone may consider unwanted.” That signal was particularly important, given the recent accusations by western countries that Russia is taking unilateral actions in Syria and as good as sends military contingents to support Syrian President Bashar al-Assad. Importantly, Russia also raises the issue of combating IS as part of its regional commitment to ensure collective protection against external threats to security. However, one should keep in mind that the CSTO has no jurisdiction to act outside its area of responsibility, i.e. its member states, except for peacemaking operations under the aegis of the United Nations. Therefore, the CSTO will have to address the IS challenge in its own territory making use of the arsenals of the regional organizations.

At the CSTO summit, Vladimir Putin gave a clear signal that Russia was ready to work together with the West.

The CSTO is authorized to collectively respond to security threats originating from beyond the respective area, for example, attacks by extremists based in Afghanistan who infiltrate the territory of the Central Asian CSTO member states from that country. However, when it comes to citizens of one of the CSTO member states who leave their respective countries to pledge a loyalty oath to IS and get back home, a legal question arises whether they can be qualified as constituting external threat, which makes it possible for the CSTO to use its collective force, or such a situation should be addressed at the national level. These decisions will likely be made given the scope of threats. Some legal documents of the CSTO may have to be amended in order to allow the heads of state to take political decisions and authorize a collective response; however, a borderline must be drawn between the militant action of the local opposition against its government and attacks by external extremist groups created under foreign ideological and religious influence. So far, an application by the head of a respective state under attack by extremists used to be such a legal limitation. Heads of state prefer dealing with their armed opposition or mass disturbances on their own, without asking for help from their neighbors in the region.

It may also be worth spelling out various sources of regional and internal instability in the long-term Collective Security Strategy to 2025, which President of Armenia Serzh Sargsyan suggested should be developed and adopted in 2016. The fundamental document of this kind is the Collective Security Concept, adopted back in 1995, when there was no CSTO as a full-scale organization, and cooperation evolved exclusively on the basis of the Collective Security Treaty of 1992. Anyway, some of the paragraphs in the Concept of 1995 have remained surprisingly relevant: for example, the list of the main sources of military threats includes (listed last, though) “attempts by external forces to interfere in the internal affairs of the member states, destabilize their internal political regime” and “international terrorism, policy of blackmailing.”

The CSTO will have to address the IS challenge in its own territory making use of the arsenals of the regional organizations.

At the same time, the CSTO has potential for preventing the increase in the numbers of IS supporters within its territory. The organization holds the annual PROXY operation to detect and shut down extremist websites, which, among others, perform recruitment functions. However, this approach is not proactive, because it fails to address the causes of extremism in the region. Naturally, security organizations are not designed to fight the sources of threats to security; however, deterrence and prevention remain their key functions. It is believed that the annual display of power within the framework of collective military exercises in Central Asia successfully prevents mass raids of militants from Afghanistan to the Central Asian countries. Possibly, it is the right time for the CSTO to take the next step and make use of diplomatic methods to prevent conflicts in the region of its responsibility.

Importantly, the CSTO Secretariat de facto uses diplomatic instruments to settle disputes between the member states behind closed doors (without exactly advertising this), which is necessary for reaching a consensus for collective decision-making. This policy was especially relevant when Uzbekistan was a CSTO member (2006–2012), because that country has numerous differences with other Central Asian nations. We should also mention the visits of CSTO Secretary General Nikolay Bordyuzha to Kyrgyzstan and Tajikistan in January 2014, when a new border conflict arose between those two countries. 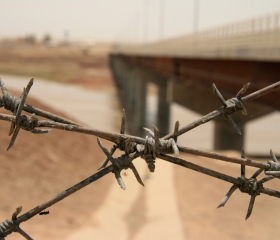 Maria Nebolsina:
IS Poses a Threat to Post-Soviet States

The next move that the CSTO could make is to add public diplomacy to its official (or semiofficial) diplomacy, i.e. to engage with civil society in the member states. One of the main recent threats to security is the media impact on society by third countries (they normally refer to the United States) or other entities (including IS) aimed to undermine public stability and, possibly, change the political regime by supporting various forms of the opposition. However, in addition to combating negative media influence it is necessary to promote the CSTO’s own positive agenda and make its own media impact. The first step towards building up the potential of “soft power” within the CSTO was made in 2013, when the CSTO Analytical Association was established. Further, in 2014, the CSTO University League was created. The CSTO also organizes summer schools in association with the Gorchakov Fund for Public Diplomacy Support. It appears that this media policy of the CSTO — albeit it helps increase the visibility of the organization — does not cover those population groups at risk of being influenced by media attacks that are capable of joining the armed opposition or armed groups based in the border regions of Central Asia and can be involved in border conflicts. Credit should be given to the PROXY initiative, which shuts down extremist websites and helps bring criminal charges against extremists. However, such an operation can hardly be used to contribute to the development of “soft power” within the CSTO; it is rather an instrument to counter “soft power” attacks by other players.

The CSTO has potential for preventing the increase in the numbers of IS supporters within its territory.

Public diplomacy also envisages the development of connections with civil society with a view to achieving foreign policy objectives of respective states. For a regional organization, this objective is to ensure security in the region of its responsibility. However, combat against threats to replace incumbent regimes using unconstitutional methods can be interpreted as the CSTO’s helping governments in their fight against their own people, who may be dissatisfied with their domestic political course. In order to avoid such accusations by western countries, the CSTO can develop its own network of ties with civil society in the member states and support NGOs that seek to settle ethnic conflicts, address poverty issues, and provide humanitarian support. A good example of such engagement is the Media Forum for reporters covering conflicts. As part of the Forum, CSTO specialists provide recommendations for journalists on how to work in conditions of armed conflicts. Such training sessions (including training in dealing with natural disasters) for the population of the CSTO member states by NGOs under the aegis of the CSTO and with the involvement of CSTO specialists could become the next step in building up the organization’s “soft power” with the use of public diplomacy instruments.