Prioritizing a full recovery from the consequences of the extended economic crisis and aspiring to a regional and global leadership role, Tokyo strives to maintain its momentum by creating a force able to efficiently project and defend its interests. The Japan Maritime Self-Defense Force’s (JMSDF) technical advancement and the extent to which the approach to its use has been honed both seem likely to presage a radical foreign policy shift.

Prioritizing a full recovery from the consequences of the extended economic crisis and aspiring to a regional and global leadership role, Tokyo strives to maintain its momentum by creating a force able to efficiently project and defend its interests. The Japan Maritime Self-Defense Force’s (JMSDF) technical advancement and the extent to which the approach to its use has been honed both seem likely to presage a radical foreign policy shift.

Limited stability seems the most apt description for the situation in Northeast Asia. Despite multilateral security-building measures, the regional conflict potential is on the rise. One way or another, the key states are involved in three cold conflicts – Korea, Taiwan and the Kuril Islands – all of them explosive due to the parties’ military potentials. China’s transition from an isolated mid-level continental power into a major global economy [1] intent on securing its sea lanes and pipelines is likely to cause conflicts vis-à-vis the United States, Japan, and India [2].

Japan has been gripped by political crisis for the past five years, with kaleidoscopically changing cabinets of ministers. The Land of the Rising Sun has been severely hit by the global financial crisis [3], and the March 2011 disaster has aggravated the plight [4]. Tokyo is more than willing to bolster its stand in the Asia Pacific region and in the world. No matter how strange it may seem, today, just as in the early 20th century and before WW2, it is the navy that brings hope and security. An island state, Japan believes it necessary to defend its national interests in the spirit of Alfred Thayer Mahan, USN flag officer and author of the Anaconda, or sea blockade, strategy. 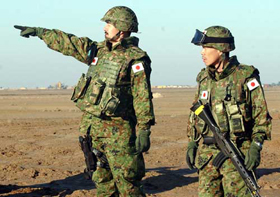 For a long time, both theoreticians and active participants were confident that the Maritime Self-Defense Force was only good for counter-submarine, countermining and patrol missions to protect commercial shipping lanes and the Exclusive Economic Zone. However, the force tends to develop in an integrated mode, focusing on its new element base alongside ship and weapon types that had been atypical, but that now exist within modernized strategic guidelines. A lot of attention is being given to air and missile defense of bases, critical military and civil facilities; protection for commercial shipping, navy groups and onshore installations; as well as to service in remote areas to implement active defense.

The Law Concerning Measures to Ensure the Peace and Security of Japan in Situations in Areas Surrounding Japan from 1999 expands the functional remit of Japan’s forces [5]. For the first time since WW2, Tokyo demonstrates its readiness to participate in joint U.S.-Japanese military operations outside national limits, i.e. potentially in Iraq and Afghanistan [6]. Japan has committed to support U.S. forces through safe shipping missions, intelligence data transfer, extending military and civilian infrastructure facilities, joint and self-sustained search-and-rescue and mine sweeping operations, evacuating civilians from international conflict zones, and providing refugee aid. 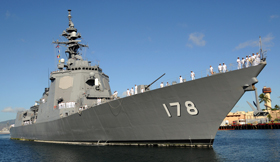 The Kongo and Atago-class destroyers are Japan’s most powerful and sophisticated battleships. They are equipped with Aegis multipurpose weapons control system, and Japan has four and two of these vessels, respectively. Costing up to 1.7 billion dollars, the ships can hit sea targets at 150 km, air targets – 120 km, and subsurface targets – 20 km [7].

Japan’s Constitution prohibits the possession of offensive weapons systems. But the movement for military reform and abolition of the antiwar Article 9 is gaining momentum, which could result in the provision of Atago and Kongo with cruise missiles (Tomahawk equivalents), especially as there are no technical barriers. Bearing in mind the availability of proper air, surface and subsurface defense systems, these ships would pose great danger to large surface groups, military bases and ground facilities in nearby countries. Should they acquire cruise missiles, initially their range is unlikely to exceed 550 km, so as to escape strategic weapon status and conform to regulations on missile technology. If Japan’s international standing grows, for example through UN Security Council permanent membership, longer-range missiles could enter service. It is worth noting that the United States has already sanctioned an increase in the South Korean navy’s cruise missile range from 300 to 800 km [8]. 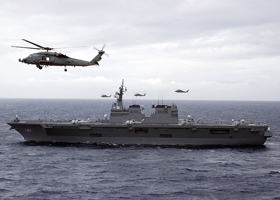 Japanese naval plans envisage the construction of three Atago-class ships by 2015, and four more by 2020 in addition to four Kongo destroyers. Five smaller destroyers are to be put into service by 2015, and ten more in 2020 to replace old ships, which started to be decommissioned in 2011. The new ships, each worth about one billion dollars, should feature enhanced systems to hit subsurface, air and surface targets to protect larger ships. The destroyers will be equipped with Stealth technology, medium and long-range antiaircraft missiles, anti-ship and anti-submarine missiles, as well as the mini Aegis fire control system [9].

The Japanese surprised the world by commissioning the first Hyuga helicopter destroyer in March 2009. Based in Yokosuka, the ship is in fact a light aircraft carrier or an amphibious helicopter carrier, although Tokyo insists on designating it a helicopter destroyer, as it sounds defensive and accords with the Constitution. The ship can take up to 11 aircraft including assault transport helicopters and fire support helicopters, with a 500-strong assault force. Even the Japanese Defense Ministry would not rule out providing the ships with F-35s, although purely for antiaircraft purposes. Hyuga's key mission is anti-submarine defense and onboard deployment of HQs and command posts. Laid down in 2008, a similar ship, Ise, was commissioned in March 2011, with three to be added by 2015 and four more by 2020 [10]. 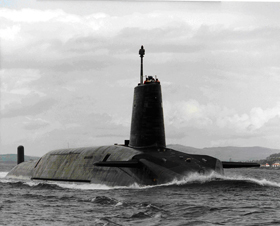 Japanese subsurface forces contain 18 diesel submarines, 11 of them from the up-to-date Oyashio class commissioned between 1998 and 2008. Worth 700 million dollars apiece, they use an advanced sheet-like shielding structure, covering the entire body with radar and sound absorbents that work like a sensor. The Soryu-class submarines are the most advanced. The first was commissioned in March 2009, and they feature enhanced displacement, a cross-shaped tail and air-independent propulsion enabling them to stay underwater for up to several weeks without battery recharging. 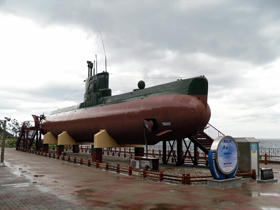 In the fiscal year 2009, Japan’s naval budget amounted to 10 billion dollars, and will undoubtedly grow with the tsunami and Fukushima consequences alleviated. Tokyo is trying to save funds through non-core budgeting: on January 2010, the defense minister ordered ships withdrawn from the Indian Ocean, where they had been deployed since December 2001 to render logistic support to the multinational squadron. For eight years the Japanese provided allied ships and helicopters with free fuel and drinking water, at a total cost of about 786 million dollars [13]. At the same time, Japan will build up its presence at the Djibouti base to "augment its contribution in the counter-piracy efforts" by rotating two destroyers and two Orion patrol aircraft serviced by several hundred men. Construction of the military facility, the first Japanese base after WW2, should cost about 40 million dollars. According to experts, this is intended both to protect the 2,000 vessels annually passing the Strait of Aden and bolster its position in the Indian Ocean, where Japan will have to compete with the Indian and Chinese fleets [14].

Should Japan become more assertive and partially revise its Constitution, the surface component may reach several groups consisting of a light aircraft carrier and/or amphibious ship and support destroyers able to use cruise missiles and aircraft against onshore targets, among other things, for pre-assault purposes. The group should feature potent air, submarine and missile defenses. Modern submarines can stealthily attack surface and subsurface ships of all classes. If this rate of naval modernization is sustained, Tokyo will by far surpass its regional rivals and will be able to counter any potential enemy through interaction with the U.S. Pacific Fleet.

The declared task of minimizing the threat from DPRK is beneath criticism, since the JMSDF potential is several times greater than that of the North Korean fleet, which boasts impressive numbers, but which consists of boats, ships and submarines built in the 1950-1970s with nigh on zero combat efficiency [15]. 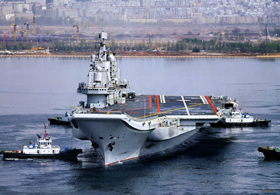 Against the backdrop of tensions over South Kuril, the Japanese naval buildup could pose a threat to the Russian Pacific Fleet. Should current trends continue, i.e. aging ships and weapon systems, loss of commanding officers' skills, poor supplies and training, in an armed conflict, Russia’s Pacific Fleet could find it faces a better equipped and much more numerous enemy force, leaving it little to fall back on other than nuclear weapons. Nevertheless, Russia should regard a strengthened Japan as being outside the scope of traditional military security and instead focus on diplomacy and economic partnership.

The repeat conflict around the Senkaku (Diaoyu) Islands shows Japan’s naval modernization in a different light. China, long seen as a purely continental giant, is out there, building its blue water navy, which is a blow to Japan’s national security, prompting it to review its defense potential and how its regional realization. Worried by Chinese efforts – commissioning its the first aircraft carrier, building large surface ships based on Russian and Western technologies, and refining its tactics (strike group formation, amphibious operations, integrated missile, air and submarine defenses), Japan is pushed to develop adequate responses.

South Korea, building its own high-tech ships and submarines, is also one to watch. Advanced destroyers and submarines carry strike weapons able to hit onshore targets as far as 800 km away. Seoul has announced it is building the sea component for an area-wide missile defense system. Tactically, the navy is leaving the littoral zone. Tokyo believes that these efforts are not intended to contain the northern threat but instead to demonstrate its capacity to its traditional rival. With the South Korean navy on the rise, there could well be an escalation of the Dokdo (Takeshima) Island dispute. Shinzo Abe’s new administration is widely expected to use the navy to position Japan as the regional leader (expanded patrols and bases, higher training intensity, improved technology), which is itself fraught with the risk of a new round of the regional arms race and further unraveling of the, already fairly unstable, security system. To this end, Russia’s role in Northeast Asia seems to have grown considerably, as Moscow is the most independent and reputable actor able help deliver stability and prevent a new Cold War.

3. Japan’s Fiscal Death is a Warning to the West.

5. Ministry of Foreign Affairs of Japan.

6. End of an Era as Enters Iraq; Japan is a valued partner in Afghanistan.

Rate this article
Share this article
FOLLOW THE LATEST DEVELOPMENTS
Project
Russia and the Asia-Pacific: Conceptual Basis for Security and Development Policy
Tags
Japan, Asia-Pacific, Fleet
Reader's choice
HideShow
Should Russia Be Worried by the New AUKUS Alliance?
Tainting IMF's Georgieva: The U.S. Campaign to Tighten the Grip on Bretton Woods Institutions in Its Escalating Competition with China
Will There Be an End to the War in Korea?
Barrier Reef to Counter China: Nuclear Edition
Are Rules of the Game Possible in the Era of Nuclear Weapons?