May 8 in France: Day of Freedom and Peace

REUTERS/Ian…
REUTERS/Ian Langsdon/Pixstream
French WWII veteran Leon Gautier of the
Kiieffer commando and German WWII veteran,
paratrooper Johannes Borner embrace as a sign
of reconciliation during an international ceremony
marking the 70th anniversary of the Allied
landings on D-Day on Sword Beach in
Ouistreham, in Normandy, June 6, 2014
0
3852
Add Reader

For Francois Mitterrand, who established the official holiday of May 8, and for the contemporary French people, the majority of whom do not know the war, this day is a tribute to all the heroes and victims of the war, but it is devoid of the pompous glorification of the winner’s army. First, France was liberated thanks to the help of its allies. Second, its ruling elite drew a conclusion from the war which shaped the construction of a united Europe in the following decades and was based on the premise that Europe should not fight any more wars. To avoid a new confrontation with its “hereditary enemy” Germany, France should make that country its closest partner and ally.

This is the official name of the holiday in France that celebrates victory in World War II. On May 8, 1945, Nazi Germany signed the act of surrender in the headquarters of Anglo-American Commander-in-Chief General Dwight Eisenhower in Reims. This date is celebrated in France as the day when World War II ended in Europe. It should be noted that due to a demand by the Soviets, another ceremony for the German surrender was arranged in Berlin shortly before midnight on 8 May, during which Marshal Georgy Zhukov represented the Soviet side. French representative General Jean de Lattre de Tassigny was present as a witness to that ceremony only at the insistence of the head of the Provisional Government of the French Republic, Charles de Gaulle. In France, May 8 became an official holiday only in 1981, after President Francois Mitterrand came to power, who experienced the victory over Nazi Germany in the ranks of the underground French Resistance. On this day, a wreath-laying ceremony at the Eternal Flame is held under the Arc de Triomphe, and foreign heads of state are invited to take part in the ceremony on the anniversaries. It is a non-working day and one of the official but not national holidays, in contrast to July 14.

The true Victory Day for the French is November 11, 1918, when an armistice was signed with Germany that ended the First World War. It was that war that survived in the national memory as the Great War, “La Grande Guerre,” which France won at the cost of great sacrifice and deprivation. In memory of the heroism of the French who died in the First World War, in 1922, an eternal flame was lit at the tomb of the Unknown Soldier in honor of those who lost their lives at the battle of Verdun. To honor the heroes of 1914-1918, monuments to the fallen have been erected in all French communes. The point is that in 1945, the joy of victory was overshadowed by the dual position of France in the camp of the victors. 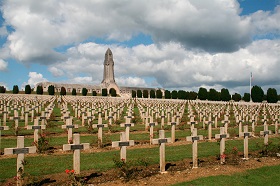 imwm.ie
The Douaumont Ossuary is at the heart of
the Verdun battlefields

France entered the war against Nazi Germany on its third day, namely September 3, 1939, but due to the lack of any practical activity of the Franco-British armies on the German front, the contemporaries called this campaign the Phoney War – une Drôle de Guerre. Hitler was able to defeat Poland and regroup for a spring advance on the West. On May 10, 1940, Nazi Germany invaded France, and a month later the latter’s government surrendered. Paris yielded without a fight, and on June 22, 1940 the newly appointed prime minister of the French state, created on the ruins of the Republic, Marshal Philippe Petain signed an armistice with Hitler.

The French rump state, whose capital after the Armistice was moved to the small resort town of Vichy, acknowledged its defeat and submission to the Nazi occupiers. The historical memory of the French is traumatized not so much by the crushing defeat in 1940, as by the collaborationism of the Vichy regime and its complicity with Hitler’s policies, especially on the Jewish issue [1]. The United States and Great Britain, united in the fight against the Axis powers, did not consider France a great power any more [2].

Almost all politicians in Europe and the world shared this opinion, but General Charles De Gaulle, who at that time was the Under Secretary of State for National Defense and War in Paul Reynaud’s Government, had a different view. On June 18, 1940, when French troops laid down their arms, he delivered the historic radio appeal “To All the French” via the BBC Radio service:

“France has lost a battle! But France has not lost the war! The Government may have surrendered, leading to panic, forgetting honor, delivering the country into slavery. However, nothing is lost! Nothing is lost because this war is a world war. In the free world, the great powers have not yet succumbed. One day, these forces will crush the enemy. When that happens, France must be part of that victory. Thus France will regain its freedom and greatness. That is my goal, my sole goal. That is why I invite all French people, wherever they are, to join with me in action, in sacrifice and in hope.” [3] 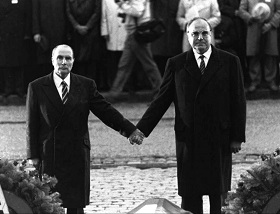 This rejection of defeat, occupation and collaboration, as well as the powerful underground resistance movement in the country contributed to the rehabilitation of France among the United Nations within the anti-Hitler coalition, and allowed the country to greet May 1945 as a victorious power. It is not surprising that the military glory of the French in World War II is associated primarily with the name of Charles de Gaulle and the memorable events that have marked his military, namely: June 18, 1940, when he announced the determination to continue the struggle against Hitler; June 6 1944, when the Fighting France units together with the Anglo-American forces landed in Normandy; and August 26, 1944, the day of liberation, when Charles de Gaulle led the triumphal parade on the Champs-Elysees. The most honorable military award of World War Two is the Order of Liberation and Charles de Gaulle awarded it to 500 of the most courageous brothers-in-arms (Compagnons de Résistance).

For Francois Mitterrand, who established the official holiday of May 8, and for the contemporary French people, the majority of whom do not know the war, this day is a tribute to all the heroes and victims of the war, but it is devoid of the pompous glorification of the winner’s army. First, France was liberated thanks to the help of its allies. Second, its ruling elite drew a conclusion from the war which shaped the construction of a united Europe in the following decades and was based on the premise that Europe should not fight any more wars. To avoid a new confrontation with its “hereditary enemy” Germany, France should make that country its closest partner and ally. It is for this reason that Francois Mitterrand called May 8 “the holiday of freedom and peace.” 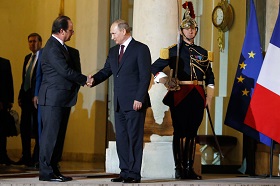 On the eve of his departure from office, Francois Mitterrand addressed high foreign guests on May 9, 1995 at the Elysee Palace over the occasion of the 50th anniversary of the victory, focusing on the Franco-German reconciliation as a guarantee of lasting peace in Europe. “It took these fraternal peoples more that a thousand years of an extraordinary, cruel, beautiful and powerful history to recognize each other, to come together, to learn from each other sciences, philosophy, and politics, to get back to their single source,” he said. Mitterrand regarded this reconciliation as the most important outcome, calling it “a victory of Europe over itself.” [4] Earlier, in 1984, a symbolic meeting took place between French President Francois Mitterrand and German Chancellor Helmut Kohl at Verdun, the site of one of the bloodiest battles of the Franco-German World War I. The leaders of the two formerly warring countries paid tribute together to the French and Germans who died in that massacre.

May 8 in France is the pathos of pacifism and typical of the country's public opinion. In this regard, it is appropriate to recall the circumstances of President Jacques Chirac’s participation in the celebration of the 50th anniversary of Victory Day in Moscow on May 9, 1995. Invited by Boris Yeltsin, Jacques Chirac arrived in Moscow with some delay in order to avoid the military parade, as Russian troops involved in the conflict in Chechnya would take part in it.

The memorable and glorious dates of the Second World War provide President Francois Hollande an opportunity to demonstrate the willingness of France to mediate in overcoming the new divide threatening Europe. Paying tribute to the role of the USSR in the victory over Nazi Germany, in June 2014,the French President was the first Western leader who dared to break the diplomatic isolation of Russia after the annexation of the Crimea and invited Vladimir Putin to the festivities on the occasion of the anniversary of the Allied landing in Normandy. It is quite symbolic that this meeting resulted in the creation of the Normandy Quartet to develop the conditions to put an end t sthe armed conflict in eastern Ukraine.

Rate this article
Share this article
FOLLOW THE LATEST DEVELOPMENTS
Tags
Russia, Germany, France, World War II, WWI, WWII, 70th anniversary of the Victory Day
Reader's choice
HideShow
Recep Erdogan in a Russian Minefield
USA vs. JCPOA: How Can Russia and China Respond?
Russia — Germany: Perceptions and Motives
The Arctic Is a Complex Region Which Cannot Be Designated with a Single Status
Discourse Has Changed From Space as a Sanctuary to the Next Warfighting Domain