RIAC continues the series of original pieces on the future of Russia's foreign policy. In his second article Vladimir Kanareykin reflects on the unfortunate interview with Russia's Minister of Foreign Affairs in 2037, ponders on cyborg's rights, women's influence on international relations and miraculous changes in European migration map.

RIAC continues the series of original pieces on the future of Russia's foreign policy. In his second article Vladimir Kanareykin reflects on the unfortunate interview with Russia's Minister of Foreign Affairs in 2037, ponders on cyborg's rights, women's influence on international relations and miraculous changes in European migration map.

It’s 8.45 pm Moscow time. I exit through the massive doors at the entrance to the Ministry of Foreign Affairs Building and turn right onto the Garden Ring towards Sobyanin Prospect. It’s hard to imagine these days that a couple of decades ago, the vast expanse of the Garden Ring was chock-full of impatient, noisy cars polluting the environment. It is much quieter now that the second belt of boulevards in the centre of Moscow has been restored. Of course, the rows of cherry blossoms donated by the government of Tokyo are at their most beautiful during the May bloom, but even in late December, decorated with colourful lanterns and LED wreaths, they give the Garden Ring a festive, even magical look.

Christmas snow has engulfed Moscow, and there are practically no pedestrians on the boulevard. An advertising pillar invites me a New Year’s concert being put on at Crocus City Hall by Alla Pugacheva, who seems to never age. Nadiya Savchenko’s face stares at me from the other side of the pillar; she is giving a presentation at the Polytechnic University next week to mark the publication of her sensational memoir Ukraine is not Europe!

As a professional who has a modicum of experience, I have to admit that today is not my day. Her Excellency, the Minister of Foreign Affairs, outplayed me elegantly and easily. And, it seemed, without any special effort. She controlled the conversation from start to finish, and we never even touched upon the most important issues. For example, Ukraine… Or the threats emanating from Armenia to withdraw from the Second Transcaucasian Federation… What would ARMEXIT mean for Russia? Why has South Africa blocked Canada’s entry into MIKTA-BRICS once again? When will the Duma finally ratify the agreement with Central Asian countries on the restoration of the Aral Sea? Why have we been unable to come to an agreement with Beijing on opening the Chinese market up fully for Russian consumer electronics? 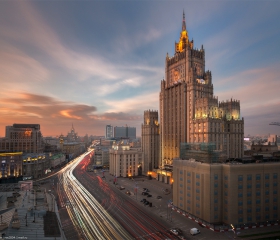 Photo by Valery Romanov
Vladimir Kanareykin: Her Excellency
Interview with Russia's Minister of
Foreign Affairs in 2037

Incidentally, about China. Getting Confucius mixed up with Laozi is a shame, you D-student and slacker, Vova Kenar! But she is too gender-biased, alleging that women are  gentle and flexible, whereas men are dry and brittle… Utter nonsense! I should have brought up the very recent past. Who ended up shattering the European Union 15 years ago? It was two women – France’s Marine Le Pen and Germany’s Angela Merkel. Every schoolchild knows that, and they don’t need Laozi to help them. And who was it that developed the road map for the “Velvet Divorce” of the Northern Union and the Mediterranean League? A real man, Bulgarian intellectual and social activist Ivan Krastev, whom I, incidentally, had the honour of interviewing last year. So we don’t need any of that demagoguery, Ms. Nenarokova!

But for some reason, the one topic that sticks out in my mind from our long conversation is cyborg rights. Now I’m no cyber-phobe. I’ve got three cyborgs myself at my putinka-flat on Berlusconi Square: an administrative assistant (my latest purchase), a butler-chef (an old model manufactured back in 2032) and a personal trainer (which doubles up as my doctor). I am very much attached to all of my cyborgs, especially my personal trainer – I had it (him? her?) custom-built at Uralvagonzavod, which took a whole three months. But rights for computers, even the most advanced computers? The responsibilities of cyborg owners? Sexual harassment? Aren’t we getting slightly ahead of ourselves, Your eloquent but somewhat exalted Excellency?

… The tracker on my left hand starts to vibrate. It’s my personal trainer-physician, a potential target of domestic abuse and sexual harassment, monitors my psychological and physical state and promptly gives me invaluable advice. Let’s have a look. Blood pressure 14 per cent higher than normal… A low haemoglobin count… Probability of a migraine coming on in 20 minutes – 37 per cent… And a long list of what I should do: 2000 steps at a rapid pace (with the best route laid out); then 20 minutes at the tanning salon (with the address of the nearest salon); an injection of my personalized set of vitamins (which are in my left trouser pocket)… I stop reading there and stuff the annoying tracker as deep into my left trouser pocket as I can. It’ll work better in there. 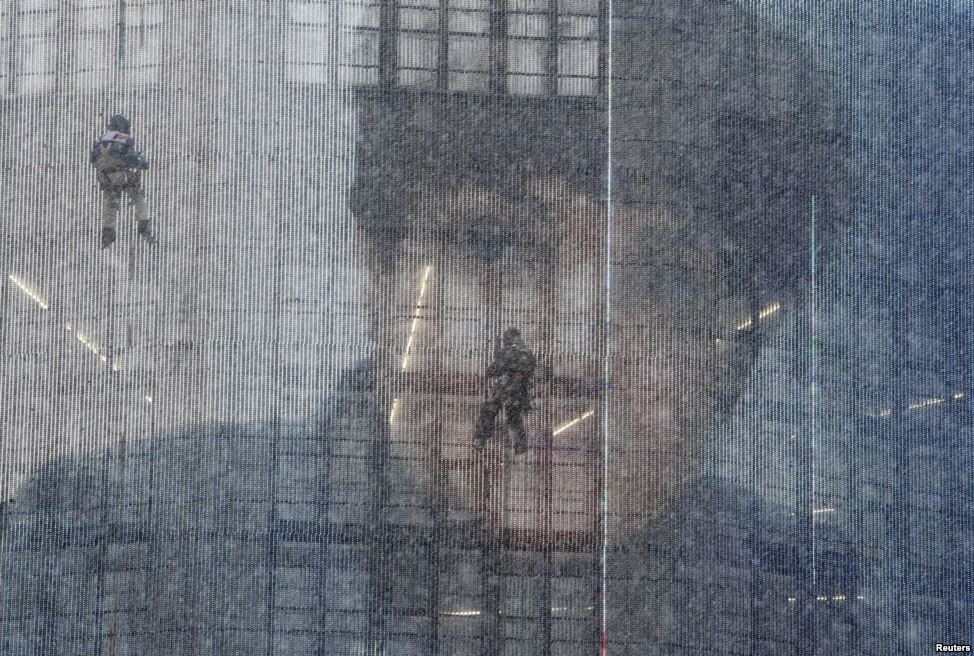 I remember that somewhere around here, on Smolensky Boulevard, there’s an inconspicuous shed that sells the most wonderful Italian pizza. After the “Five Stars” movement turned Italy into a confederation, migrants from the south of the Italian Peninsula started to trickle into Russia – Calabrians, Puglians, Sicilians and others. Before long, this trickle turned into a flow that greatly changed the cultural landscape of our city. A side effect of this movement has been the rapid spread of the influence of the Sicilian Mafia on Moscow and the surrounding regions; the Sicilians have driven out the gangs from the Caucasus that we have become used to. But the arrival of the Italian immigrants has had a positive effect on Moscow cuisine.

Unfortunately for me, but fortunately for my diet, the pizzeria is closed. Or it didn’t even open today – the Italians are probably celebrating their Catholic Christmas. But next to the pizza-shed I spot a small log hut where two Tyrolese gentlemen with blond whiskers are offering passers-by mulled wine and Austrian apple strudel. They had probably escaped from the Austrian Freiheitliche Partei Österreichs, which had come to power once again in Vienna. But these Austrian refugees didn’t look like they were going short of anything. Judging from their plump red faces and sparkling eyes, these two fellows would often treat themselves to their own produce! So as to avoid the inevitable scandal with my cyborg-trainer, I have to pass on a slice of apple strudel. But I do treat myself to a hearty mug of strong mulled wine, toasting as I do so the inalienable rights of biological Homo sapiens in general, and the male half in particular…

… I walk a few more minutes along the fresh snow among the winter cherry blossoms at a deliberately slow pace, to spite my personal trainer. Here, on the intersection of the Garden Ring and Sobyanin Prospect, I can just about make out the dark mass of the monument to Dmitry Bykov in the thick snow. Made in the inimitable pompous style of the restless monument sculptor Zurab Tsinandali, the statue of the great writer and poet is a very recent addition to the boulevard; the unveiling ceremony took place a few days ago to mark the birthday of the classic writer. 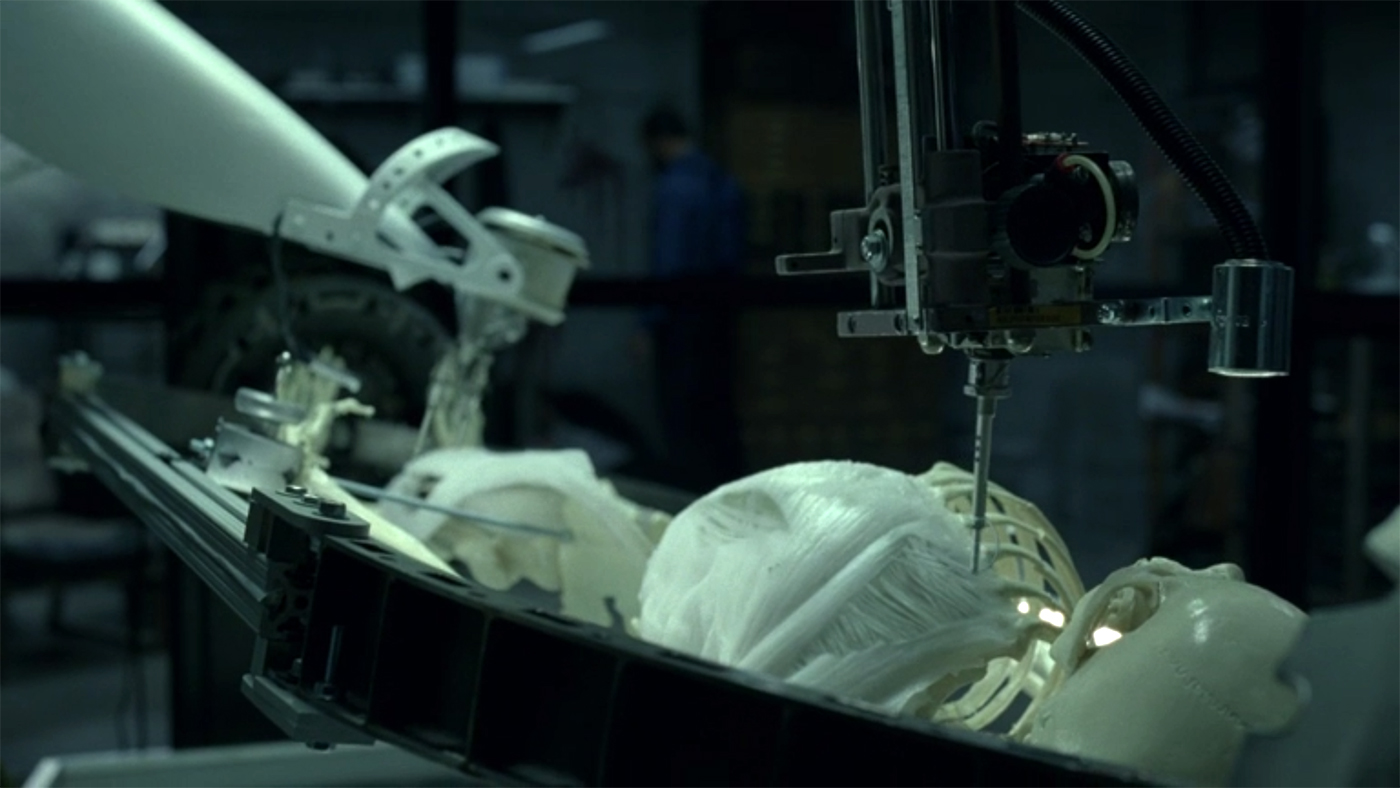 The Christmas snow falls gently on the Bykov’s cast-iron hairdo, forms fluffy epaulets on his shoulders, and envelops the statue and the raised granite pedestal that has been covered with flowers laid down by fans, quotations from the maestro’s works carved into the rock. Under the thick layer of snow, the nano-iron Bykov loses some of his majesty and starts to look like a mischievous and good-natured Santa Claus.

A young couple with a child aged seven or eight is standing by the statue. All three are dark-skinned, with white teeth and large, dark eyes. The boy is wearing a black thermal overcoat uniform and a peaked cap with the shining emblem of the Third Moscow Grammar School on it. They are obviously immigrants. But where are they from? India? Indonesia? Or maybe Lebanon? I overhear a part of the conversation between the father and son.

“Dad, is it true that Bykov is the greatest writer of them all?” the boy says in perfect Russian.

“Yes he is,” the father answers in English, looking somewhere into the distance while obviously preoccupied with something else.

“Dad, is it true that Russia is the best country in the world?” the boy changes subject abruptly.

“Sure it is,” the dad answers without really thinking, continuing to think about something else.

The father finally focuses on the conversation with his son, stares into his eyes and switches to Russian. He speaks slowly, with a thick accent (yep, they’re definitely from South Asia!). But he doesn’t make any mistakes and he doesn’t pause to find the right word.

“Would you say that your mum is the most beautiful woman in the world?”

“Of course she is!” the child answers proudly and without a shadow of doubt.

“Why?” the crafty father pushes.

“What do you mean, ‘Why’?” the boy answers with indignation and is speechless for a second. “Because she’s my mum!!!” 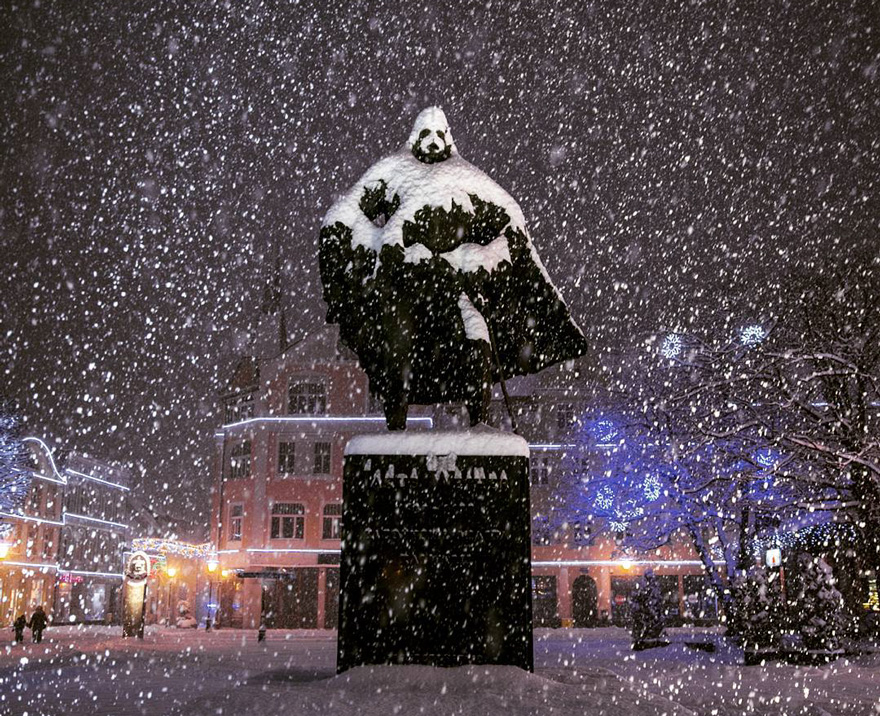 “There you have it!” the father carries on his educational exercise. “Russia is the best country in the world because it is our country. Ours,” he repeats solemnly and stretches out his hand, as if calling the snow-covered Bykov to witness. “Yours, mine and mum’s. Do you understand?”

The boy nods his head silently, and the mother, deeply moved by what she has just witnessed, presses herself against her husband’s artificial fur coat. A gust of wind sweeps the snow top hat from Bykov’s head and shakes it off his theatrical epaulettes and aiguillettes, revealing the figure on the pedestal in all its terrifying glory. He doesn’t look like Santa Claus anymore… I’m sorry, but he’s a dead ringer for the one and only, the stern and unbending John Snow from the 25th season of Game of Thrones! The irreplaceable and immortal Lord Commander of the Night’s Watch, Defender of Westeros from the dark forces, Guardian of the North Wall and dread of the White Walkers.

Staring into the snowy void of the boulevard at night with its tall granite pedestal, the iron knight takes the three migrants standing next to him under his protection. But that’s not all – he also takes the journalist Vladimir Kanareykin, Alla Pugacheva, Nadiya Savchenko and Natalya Nenarokova, as she rushes home in the Moscow snow storm at the New Year eve. And the Italians who are already celebrating Christmas. And the Tyrolese gentlemen waiting to serve their final customers some of that wonderful apple strudel. And the cyborgs that are fighting for their rights. And even the stubborn President of the United States, Donald Trump Jr., presiding over his useless sovereignty in the Oval Office of the far-off White House.