Twenty-five years ago on the night of June 4, the Chinese government used troops to suppress student protests on Tiananmen Square. The official version of the events remains intact, a counterrevolutionary uprising, with the very subject kept strictly taboo since the ruling elite regards the student outbursts in Beijing and other large cities as a threat to the Communist Party of China (CPC), the core of the national political system. The government believes that in the absence of harsh measures, more boat rocking would have brought about civil war, the disintegration of the country and a severe political crisis similar to the crash of the East European regimes and the breakup of the Soviet Union.

Twenty-five years ago on the night of June 4, the Chinese government used troops to suppress student protests on Tiananmen Square. The official version of the events remains intact, a counterrevolutionary uprising, with the very subject kept strictly taboo since the ruling elite regards the student outbursts in Beijing and other large cities as a threat to the Communist Party of China (CPC), the core of the national political system. The government believes that in the absence of harsh measures, more boat rocking would have brought about civil war, the disintegration of the country and a severe political crisis similar to the crash of the East European regimes and the breakup of the Soviet Union.

Meanwhile, even the fiercest critics of Beijing's authoritarian rule acknowledge that after Tiananmen, the Chinese political system has not remained rigid. As a matter of fact, the inevitable crackdown lasted only a little while. With time, the regime has been liberalized, although party rule is still at the core. However, the heart of the matter lies in societal shifts over the past 25 years.

Changing at astonishing speed, China has been building up its economic might. At the same time, urbanization and middle class have been on the rise, with society frightfully splitting and social and territorial inequalities gaining speed. The most populated country in the world has appeared to be running head-on into nontraditional security threats such as terrorism, extremism and drugs. Economic growth above double-digit rates have increased environmental risks, making manmade disasters a reality, for example the 100-ton discharge of nitrobenzene into the Sungari, an Amur River tributary, in 2005, where Russia was also affected. Public strains intensified after numerous food and medicines safety scandals, the gravest being hazardous melamine found in infant milk formulas. As a result, tensions have soared, with protests reaching dozens of thousands every year. Who knows, the total potential for antigovernment protests today might easily exceed that during the Tiananmen affair, which means that China is on its way to becoming a boiling pot of troubles and challenges, as well as not easily governable as before. 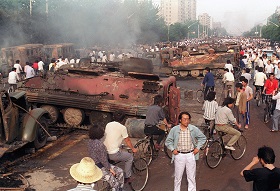 usnews.com / Manuel Ceneta
Beijing residents inspect the interior of more
than 20 armored personnel carriers burned by
demonstrators to prevent the troops from moving
into Tiananmen Square, on June 4, 1989

Hence, the process labeled in China as a political reform appears to be a determined attempt of the CPC to adapt to the changing environment, the drivers of the political crisis management being both the domestic and international challenges Beijing has faced along with its rise.

Many foreign experts praise the adaptability and comparatively high level of governance of the Beijing regime. According to American analyst Francis Fukuyama, the strong side of China's political system is its ability to take make difficult decisions that show the leaders' accountability toward their population. "That accountability is not, of course, procedural; the authority of the Chinese Communist party is limited neither by a rule of law nor by democratic elections. But while its leaders limit public criticism, they do try to stay on top of popular discontents, and shift policy in response," Mr. Fukuyama wrote in an article in early 2011.

Practically no amendments came forward following the 2012 political crisis caused by the affair of Bo Xilai, a former member of the CPC Central Committee Politburo, who in 2013 was sentenced to life on corruption and power abuse charges. Analyzing the reasons for Mr. Bo's rise and fall, Mr. Fukuyama wrote that the key problem for modern China is that of the "bad emperor", which means that in the absence of checks and balances, the inflexible centralized government can be effective only when the country is ruled by wise leaders. On the other hand, major shocks are guaranteed if the levers of power fall into the hands of "bad emperors", i.e. tricksters and crooked politicians.

In fact, the existing Chinese system is quite poorly protected against abuse by "bad emperors", with the Confucian ideals of meritocracy regrettably appearing unattainable. The omnipotence of interest groups, legal nihilism and rampant corruption make the system highly vulnerable, especially if the economic growth rate drops. Therefore, Xi Jinping, the new Chinese leader, has focused his domestic policies on rooting out corruption, as well as symptoms of decay and the loss of consolidation within the elite. 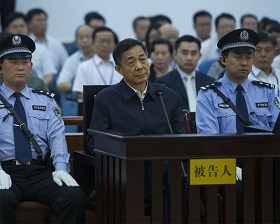 rbc.ru
Bo Xilai, a former member of the CPC Central
Committee Politburo, in 2013 was sentenced to
life on corruption and power abuse charges

China's new party leaders are truly concerned about preserving the CPC at the helm and would like to avoid the fate of the Communist Party of the Soviet Union. Mr. Xi has addressed the public with numerous speeches on this subject. For example, much attention has been given to his words at the Politburo special session where he stressed the accountability of top officials and called upon the party bosses to make an example for other citizens rather than "abuse power for profiteering and demand special treatment."

After Mr. Xi came to power, the CPC has adopted a series of internal documents regulating the decision making process. The leaders seem to have understood that the party cannot remain an airtight corporation which exists under laws unknown to the society. Hence, the new and apparently procedural documents appeared publicly in the media. This CPC legislative reform is aimed to stabilize and streamline the party governance system and improve its abilities to rule the increasingly more sophisticated Chinese society.

Previously, party theoreticians had been keen on socialist democracy and intra-party democracy rather than on the legislative process intrinsic to the bourgeois democracy criticized in China. But now attention has turned to Mr. Xi's statements on the need to "lock the government in the cage of a system", which means not only curbing unjustified privileges but also introducing institutional checks and balances for bureaucrats and more effective channels for feedback between the authorities and the people.

Currently, the government is set to give up the extensive development model and the exclusive orientation on the GDP growth, something that implies the need for new criteria to measure the effectiveness of officials. According to Mr. Xi, they must incorporate a multitude of aspects including the level of societal development, prosperity, environment, etc., which has been a response to the emerging gap between the changing of the economic growth model on the national level and the interests of the local bureaucracies. 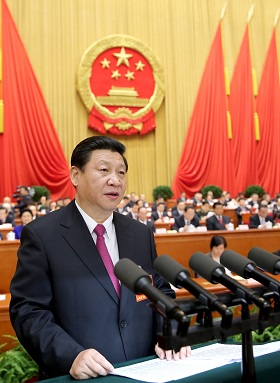 www.eurobiz.com.cn
Xi Jinping, the new Chinese leader, has focused
his domestic policies on rooting out corruption,
as well as symptoms of decay and the loss of
consolidation within the elite

Yu Keping, a well-known Chinese political scientist close to the CPC leaders, has found the heart of current predicaments in the need to ensure public stability on the basis of a broad consensus that should involve "a vigorous shift from static stability through construction of dams to dynamic stability based on canal building."

This figurative and quite cautious formula seems to reflect the dissatisfaction of the liberal elite about the ruthless suppression of debate in recent years. Key has been erecting "dams" to contain the outbursts of social discontent, while the channels for expression of the public opinion have been either rudimentary or nonexistent. The Internet, relatively free in comparison with other media outlets, is being targeted by censorship. As a result, reaching public consensus is becoming more difficult, while group interests prevail over nationwide concerns. Now that the reform is becoming vital for each Chinese citizen, discussion appears unavoidable. In the past, Beijing's mantra has pointed to stability as a prerequisite of progress, but now the path to stability is becoming more nuanced.

Mr. Yu sees the main task in "greater attention to social equality and justice, as well as building a democratic government model." The contours of the refreshed political system are just emerging, although it will definitely differ from Soviet and Western patterns. In terms of significance, the political reform unquestionably equals the economic experiments launched by Deng Xiaoping, which means that the process will anyway be gradual, along the lines of Mr. Deng's guidance "to cross the river feeling the stones" that seems even more noteworthy when it crosses the minefield of political reform.

Rate this article
Share this article
FOLLOW THE LATEST DEVELOPMENTS
Project
Russia and China: Partnership in the Context of Security Challenges and Development in the Asia Pacific
Tags
China, Xi Jinping, Tiananmen, Political reform
Reader's choice
HideShow
Coronavirus: A New Bug or Feature of World Politics?
The Thucydides’ Trap: the Avoidable Destiny Between the US and China
The World After COVID-19: Does Transparent Mean Healthy?
Digital Economy is the Economy of Innovations, not Inventions
BRICS: The Stepping Stones Towards New Global Governance