The Middle East: Postmodernism Is Over

On the historico-philosophical level, the transformation that has plunged the Middle East into chaos can be viewed as the end of the modern world’s postmodern paradigm. In the wake of postmodernism, the shape of the world is still vague, but the Middle Eastern reality makes it possible to describe some of its features.

On the historico-philosophical level, the transformation that has plunged the Middle East into chaos can be viewed as the end of the modern world’s postmodern paradigm. In the wake of postmodernism, the shape of the world is still vague, but the Middle Eastern reality makes it possible to describe some of its features.

The rapidly evolving situation in the Middle East in recent years has been compared with many things, above all wars. Some of these wars are listed below:

— The Thirty Years’ War: due to a large number and diversity of participants, the role of non-state actors, and the importance of religion. This gives rise to a debate on the possibility of the “Peace of Westphalia for the Middle East;”

— The Russian-Turkish wars of the 18th century: due to the role of government leaders beyond problems in bilateral relations. And optimists pin their hopes on another Treaty of Küçük Kaynarca;

— World War I: due to the selfish and conflicting aspirations of the participants in the events and the gradual escalation of tension amidst general assurances of a relentless struggle for peace. This generates an anticipation of bloodshed and a new Sykes-Picot Agreement;

— The Cold War, which could result either in the Cuban Missile Crisis, or détente, or perestroika.

All of these comparisons – and more are available – testify not only to the growing fear of disquieting, unpredictable and potentially catastrophic changes, but also, more importantly, to confusion against the backdrop of uncertainty, which, apparently, arises from the obvious inadequacy of our language of reality. Each of the above comparisons allows us to identify certain features of this reality, but does not offer the opportunity to express its completeness and, accordingly, to understand it.

The comparison with the Cold War offers an excellent example. Strident rhetoric, similar to the that of the 1960s, makes some regional leaders act as if we are really facing a situation that occurred half a century ago, and today, just as then, it is possible to get the most out of the confrontation between the two superpowers by identifying oneself with the leaders of the non-existent Third World.

This lack of comprehension of reality is a consequence of the postmodern background that we have become accustomed to and which has made us feel quite comfortable. 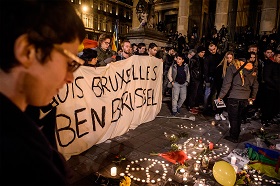 EPA/CHRISTOPHE PETIT TESSON/
Vostock Photo
Sergey Veselovsky:
As We Live In These Dark Days Filled With
Violence, Opposition and Hate

In fact, the world was postmodern only yesterday. And postmodernism was peculiar not only to the philosophy, art, and literature of continental Europe: this was our general view of the world, and hence politics.

It was a universe of relativity, freedom from ideologies and “grand narratives” (the almost universal ideology of democracy and liberalism has lost its ability to be an ideology precisely as a result of its totality), an exercise in semantics, slogans and discourses.

All of the Arab leaders overthrown in 2011 displayed at one time a brilliant ability to do so. As and when needed, they held themselves out as defenders of democracy and human rights, or, in contrast, as proponents of traditional values, but, in fact, dispensed with any ideology and coherent development strategies. And this makes them fundamentally different from the first generations of Arab presidents, namely Gamal Abdel Nasser, Anwar Sadat, and Habib Bourguiba, who perceived themselves as the authors of incomplete narratives.

However, the biographies of two men – Yasser Arafat and Muammar Gaddafi – comprise both modernist (narrative) and post-modern periods. Muammar Gaddafi, who masterfully used the “Third World theory” to explain either socialist experiments, or the policy of self-reliance, or the open market, or liberal reforms, displayed the most extravagant example of ideological verbal gymnastics of the postmodern epoch.

The spirit of postmodernism is peculiar to the tragedy of September 11, 2001 with all the latter’s symbolism, media interest, and iconic significance as well as the war on terrorism that started in its wake – the war against a somewhat abstract enemy which does not lend itself to precise definition. And the fact that this war has helped to settle a number of very real international problems, having promoted a temporary positive Russian-American cooperation, fails to bring to naught the overall postmodern nature of the epoch.

It was the world of simulacra: infinitely moving appearances; symbols that did not require the signified; the world of game and irony.

A wave of protests that swept over the world in 2011 put an end to this all. During their performance in 2007, the art groups “Bombily” and “Voina” blocked one of Moscow’s alleys with a banner that read: “We don’t know what we want.” The slogan was, in many ways, ahead of its time. It reflected the feeling of disappointment with postmodernism and the critical need of the “angry youth” in a new message and return to the signified.

This marked the beginning of post-post-modernism, the development of which we are witnessing today and which is particularly relevant to the Middle East.

In the wake of irony. Not just DAISH

The essence of the new epoch, which has yet to be perceived, is reduced for the time being to overcoming postmodernism and mastering the latter’s methods and techniques for articulating an adequately modernist statement. 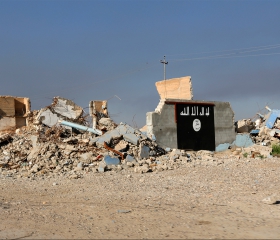 What statement in particular is to be articulated? That is the mother of all questions.

DAISH offers the most terrible and at the same time a spectacular example of the matter at hand. Through its practices, the organization is developing the Al-Qaeda methodology, sometimes bringing it to perfection. Media violence, passion for grandstanding, citationality, eclecticity… This is illustrated by the orange coveralls of those sentenced to death, reminding the audience of Guantanamo; the speeches of Abu Bakr al-Baghdadi in the mosque of Nur ad-Din Zangi, who fought against crusaders; the naming of al-Baghdadi caliph to be known as “Caliph Ibrahim,” which makes a reference to the first and the righteous caliph, who led the Muslim community after the death of Prophet Muhammad, and to the legendary capital of the Caliphate, devastated by the American intervention.

Technically, DAISH brought to its logical extreme the post-modern nature of the Al-Qaeda methodology. This is true for at least two things: the instrumentalization of violence and the methods of terrorist activity.

DAISH turned mediatization of violence into a routine, into a kind of a TV series snuff genre, in which the distinction between reality and fiction is completely blurred.

This line of the organization’s activity seems to be consistent with global trends. Remember “The Blair Witch Project” – a horror film that received various film awards and was shot with an amateur camera? Remember the cute geek Dexter? Remember the evening news?

If our culture day after day consistently pushes real life violence into the media space, incidentally erasing the visible boundaries between the two realities, why can’t this violence be forced back into reality one day? In a world where spectators are always participants in the drama, a gun on stage is bound to fire live rounds at the auditorium instead of blanks at one time or another.

In this regard, DAISH has a double identity. On the one hand, it is a phenomenon of the Middle Eastern socio-political reality, and on the other, it is a monstrous result of global cultural development.

At the same time, the organization has managed to excel at achieving “perfection” in its terrorist activities. Cheap and technically simple terrorist attacks at the Bardo Museum, and on a Sousse beach (Tunisia), and the destruction of a Russian aircraft over Sinai (Egypt) collapsed the tourism sector of the two countries. The organization spends much more money on “advertising” violence through shooting picture plots, disseminating information via the Internet, etc., than on the violence itself.

However, DAISH has not just developed, but also has overcome the postmodernism inherent to Al-Qaeda. The activities of DAISH aimed at establishing a new state apparently indicate a return to the grand narratives of the modernist era, or, in other words, the desire to offer the world an alternative global socio-political project. DAISH with all its avatars really broadens the scope of political Islam, sending its message to all those who are discontent with the current world order. This explains its appeal to some citizens of Western countries, and of Russia too. In this respect, its ideological message has much in common with both the Nazi and the ultra left ones. 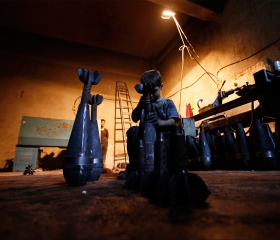 REUTERS/Hamid Khatib
Vasily Kuznetsov:
Pessimism of Reason and Optimism of Will.
The Arab World the Day After Tomorrow

One can only agree with Olivier Roy, French political scientist-orientalist, that it is a global message, which has nothing to do with the Middle East, or religion, but resonates with the social, psychological and cultural problems of the Western societies, that attracts natives of Europe and America to DAISH.

Against this backdrop, the central issue is not so much a military and or an ideological struggle against DAISH or terrorism in general, but a counteraction in terms of the value system.

Ironically, the “creative class,” whose representatives should generate and hold onto “values” by virtue of their professional affiliation, happens to lack these values itself. The jihadists operating in the region where this “creative class” is poorly represented have turned out to be the only force that generates values.

Now it is the jihadists who are shaping the discourse in the Middle East. They once proclaimed a confessional war in the region, and today the whole world is discussing the Sunni-Shiite discord, while extra-regional actors rush to throw their weight behind religious minorities.

The jihadists once set the goal of destroying the Sykes-Picot “imperialist system,” and today thousands of experts and politicians are involved in discussing the fate of the region after the collapse of the Sykes-Picot system.

Finally, the jihadists have become our enemies, and it is their aggression that we have to repel reactively.

However, this has happened before. We have witnessed ultra-left movements in Latin America: they were cruel, sometimes barbaric, but for some people quite attractive and romanticized; and they were creative too. And we have the relevant experience of dealing with them and of putting an end to violence in the region.

This experience shows that the civilized world of the West and the East will lose battles with new barbarians unless and until it stops responding to challenges and starts setting the agenda itself. And this can happen only if and when it realizes that the era of simulacra and games has passed, and it is necessary to get back to reality and, for a start, to embark on handling the acute problems of the Middle East (and other regions too).