The relations between Russia and China find many convergences, yet their bilateral ties are pragmatic rather than ideological. 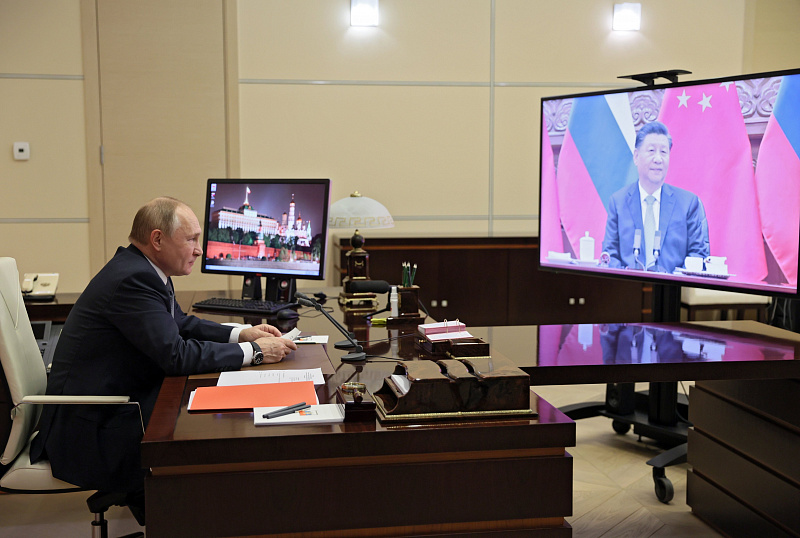 In fact, the relations between Moscow and Beijing in the international arena do not appear competitive as such, since both of them are using their “complementary advantages” to challenge the US domination. Although they are usually seen cooperating and coordinating their positions on various issues, there are instances where they do not share similar views. The two countries consider bilateral cooperation as a key factor in “changing the global picture” and promoting their goals in the international arena. In coordinating their approaches at the international fora, the two countries are keen to ensure that the Central Asian region does not get transformed into a zone of civil unrest or serve as a platform for radical Islamist forces, primarily ISIS. However, there is increasing concern within Russia over China’s efforts to deepen its influence in Central Asia.

In Moscow’s opinion, Beijing is systematically consolidating cooperation with the Central Asian countries in the defence, security and intelligence spheres. Beijing’s move (February 2016) to involve Tajikistan in the Quadrilateral Coordination and Cooperation Mechanism (QCCM), which includes China, Pakistan and Afghanistan was followed by intensification of China’s strategic security cooperation with Tashkent. Sale of defence equipment to Kyrgyzstan, Turkmenistan and Uzbekistan enables Beijing to further cement ties with the Central Asian countries. The Belt and Road Initiative (BRI) and the China-Pakistan Economic Corridor (CPEC) projects are the economic content of Beijing’s push into the Central Asia. Moscow’s emphasis on linking BRI with the Russia-led Eurasian Economic Union (EEU) appears to be aimed at ensuring that China’s flagship project does not hold sway in Central Asia and is tagged to a Russia-led mechanism. While the Russian establishment favours integration with China’s economic projects, Moscow is of the view that such a partnership should entail strengthening China’s relations with the EEU as well.

Russia views China’s growing economic and political penetration in the resource-rich Central Asia with great unease and usually at its own expense. Moreover, Russia’s investments in the region have been lacking, and remittances from Russia of Central Asian immigrants have declined significantly, largely because of Russia's economic downturn and Western sanctions. Meanwhile, China has strengthened its economic clout in the region by becoming region’s largest investor as well as biggest trade partner. Due to its sufficient financial resources, China also provides a wide range of areas for cooperation. Beside the economic frontiers, China is also cutting into Russia’s military hold in the region.

So far, officially it has avoided steps to project itself as a prominent regional military superpower or an alternative to Russia. However, BRI-related infrastructure projects and investments provide good reason for China to assume a more active military role in the region. In this direction, China has strengthened its military cooperation with the Central Asian countries of late, including through supply of military-technical equipment, military drills, personnel training and joint anti-terrorism operations. These Chinese military developments may have stirred anxiety in Moscow, with some experts labelling the moves as an attempt to create an alternative Beijing-centred security framework in the region putting Russia at a disadvantage. Russian officials have not publicly commented against China’s increasing military activities in Central Asia, but they have termed them as anti-terrorist in nature.

The expansion of overall bilateral trade and economic cooperative relations is primarily shaped by the profit principle, complementariness, and mutual commercial gains. Extensive settlement of Chinese nationals and leasing of land by them in Russia’s Far East have also raised Moscow’s concerns about China’s growing influence in the region. There have been apprehensions in Moscow about Beijing trying to copy the former’s technology. Many in Russia are of the view that with China’s increasing willingness to play a leading global role, strategic competition between China and Russia may increase, which could “undermine” cooperation. In terms of bilateral trade, Russian trade with China increased in mid-2000. Bilateral trade was shaped predominantly by economic factors, contracting after the global financial crisis of 2009 and a drop in oil prices in 2014 that coincided with the annexation of Crimea and sanctions on Russia. 2021 represented a record year, as by the third quarter trade reached the levels of 2019, the pre-pandemic high. China’s share in Russia’s foreign trade stood at 2-3% of total trade in 1996, moving to 20-25% by 2021. However, from China’s perspective Russia’s share of China’s total trade has remained static, indicating that while trade is deepening, it is one sided. When we do focus on qualitative nature of the Sino-Russian trade, it is clear that Russia continues its commodity-export model, indicating stagnation, while China moves to export higher value-added goods, reflecting economic advancement.

China and Russia are situated in two different zones of economic development. The Chinese economy is being steered for attaining the top position in the world. Russian economy requires structural reforms as it is passing through the bottleneck of the commodity-export model, and it is undeniably positioned as the “younger brother”. It would therefore be interesting to observe whether China’s economic prowess gets utilised in Russia’s interest or against it. At the same time, Russia’s preparedness and desire to integrate into Chinese economic designs or attempts to keep away from them also need to be delved into. Such partnership should entail strengthening of China’s relations with the Eurasian Economic Union notwithstanding the fact that there is potent opposition to the same.

The other side of the coin is that there is unease within Chinese establishment on Russia’s increasing role in the South Asian countries, especially in the military-political and military-technical fields. Case in point is the growing Russia-Myanmar defence cooperation, which is being closely watched by the China as it threatens to reduce both Myanmar’s strategic dependence on China, as well as shrink market share of existing Chinese defence manufacturers. Chinese experts assess that the domestic disturbances within Myanmar provide Russia with tactical opportunities for enhanced defence sales. By the same token, among the non-Arctic states seeking partnership with Russia as a means to increase their presence in the northern polar region, China has become by far the most visible player. However, despite this apparent collaboration, many analysts see these Chinese advancements into Arctic region as a strategic threat: in addition to geo-economic and geopolitical implications thereof. Growing Chinese activities in the region are likely to further pollute the Arctic and speed up adverse climactic changes with global repercussions.

Technological research and development is one area where Russia still has certain advantages over China (particularly in aerospace engineering, arms and nuclear sectors) and Russian official strategy seeks to safeguard this advancement, shaping the nature of its collaboration with China. In terms of technological cooperation, it increased in the mid-2010s, but it can be characterized as sporadic and focused on a small number of projects in arms technology, nuclear power and space exploration until 2018 when the US sanctioned China (Huawei). Sino–Russian emerging technology cooperation increases in more sensitive regarding collaboration in more strategic technologies, such as artificial intelligence, information and communication technology, cyberspace and aerospace engineering, along with advanced military-technical cooperation.

In sum, Sino-Russia relations are invariably good, testament to which is also the recent virtual meeting between the two heads of State, Xi Jinping and Vladimir Putin, the second in one year in preparation to an in-person summit in Beijing in February. However, despite the relationship is being hailed as a “model of coordination between countries in the 21st century”, both countries are wary of each other and well aware that the Treaty of Good-Neighborliness and Friendly Cooperation, signed in 2001 and renewed this year, is just a framework for dialogue, quite far from framing a strategic alliance.